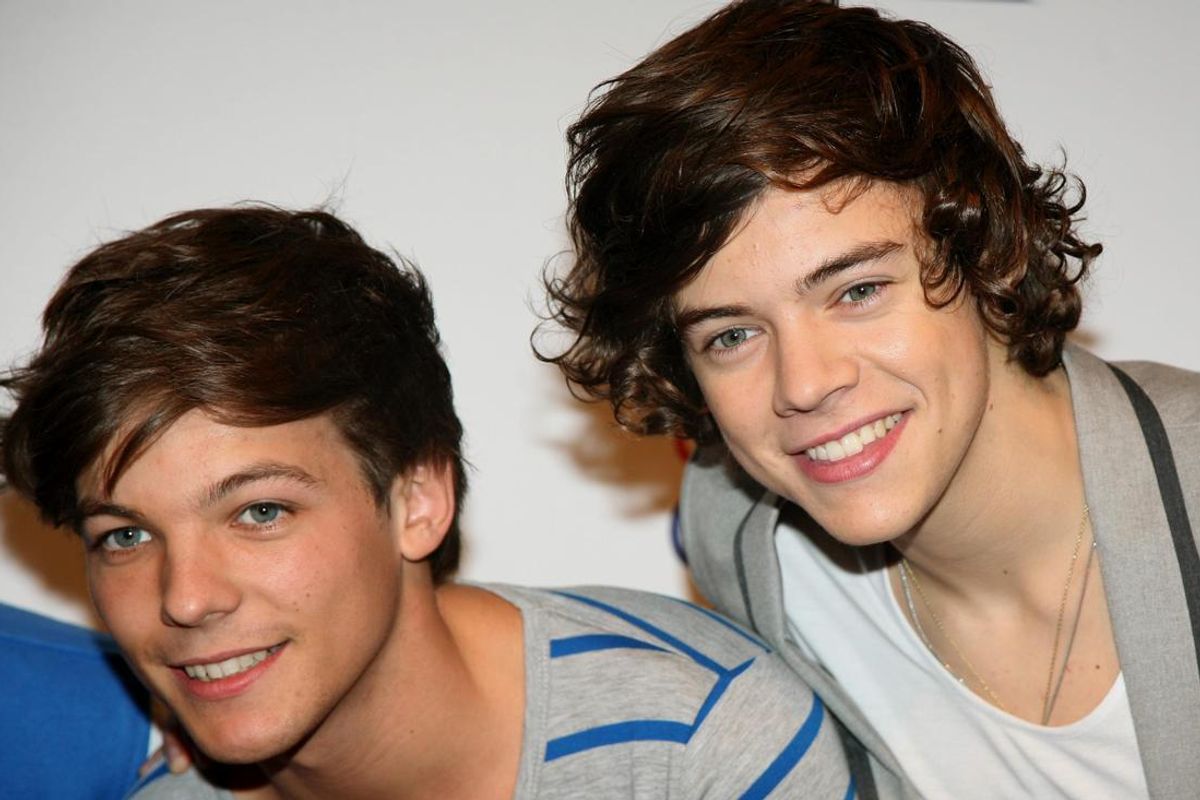 A Brief History of "Larry Stylinson"


"Ziall."" Niam." "Lirry." "Nouis." The boys from One Direction have long been the subject of fan fantasies that imagined that two or more of them were romantically involved (and that usually combined their names "Bennifer" or "Brangelina"-style for added effect, of course).

Going as far back as 2011, long before it was announced that Louis Tomlinson was going to be a father, and before Harry Styles began dressing as a young witch, a group of One Direction fans coined a term for them: "Larry Stylinson."

"Larry Stylison" is the name of what some Directioners claim is a secret relationship between the two members and when you Google the made-up name, almost 800,000 results come up. And a Tumblr search propels you into a Gravity-sized black hole of screenshots, photos and other "proof" that Larry is real.

Perhaps it was Louis and Harry's mutual affection and closeness in the early years of the band, but for years, the Nancy Drews of the information super highway have been watching every single move Harry and Louis make on social media and in public, trying to unearth clues of a secret relationship. Some even have accused the record label that manages the band, or "Management," of a cover-up job in 2012 when the boys seemed to be a little less affectionate than usual.

There are pages and pages of posts examining everything from their tattoos to their body language, all saying these two little lads are in a committed, secret relationship. Some fans believe that Harry and Louis have "Hi" and "oops" tattooed on their respective bodies because those are the first words they ever said to each other. They also believe that a ship tattoo on Harry is part of a pair with a compass tattoo that Louis has.

While some fans just chalk up "Larry"'s affection in the earlier years of the band to a "bromance," others go so far as to claim that Styles and Tomlinson are married, and have been since September 28, 2013 (#2YearsOfLarryMarried trended worldwide on Twitter last month). Fans point to posts from noted Caroline Manzo hair twin Ed Sheeran, and other friends and relatives of the boys to support their claims. Harry himself tweeted, "We don't need no piece of paper from the city hall," which to some could only mean one thing: wedding bells.


What makes this fantasy so interesting is that these fans aren't imagining themselves in relationships with the members of the band, but instead are imagining the boys together. We've come a long way from the time when millions of young girls had their hearts broken when Lance Bass came out on the cover of People Magazine. Now it seems like the fans would like nothing more than if one of the members of One Direction did the same.

With Zayn Malik gone from the group, and the band reportedly headed for a break up (but not without putting out another album first; Made In the A.M. comes out tomorrow), Larry Stylinson fans are hoping this means the boys can finally stand together in the sun and go down in history as one of the great couples of our generation.