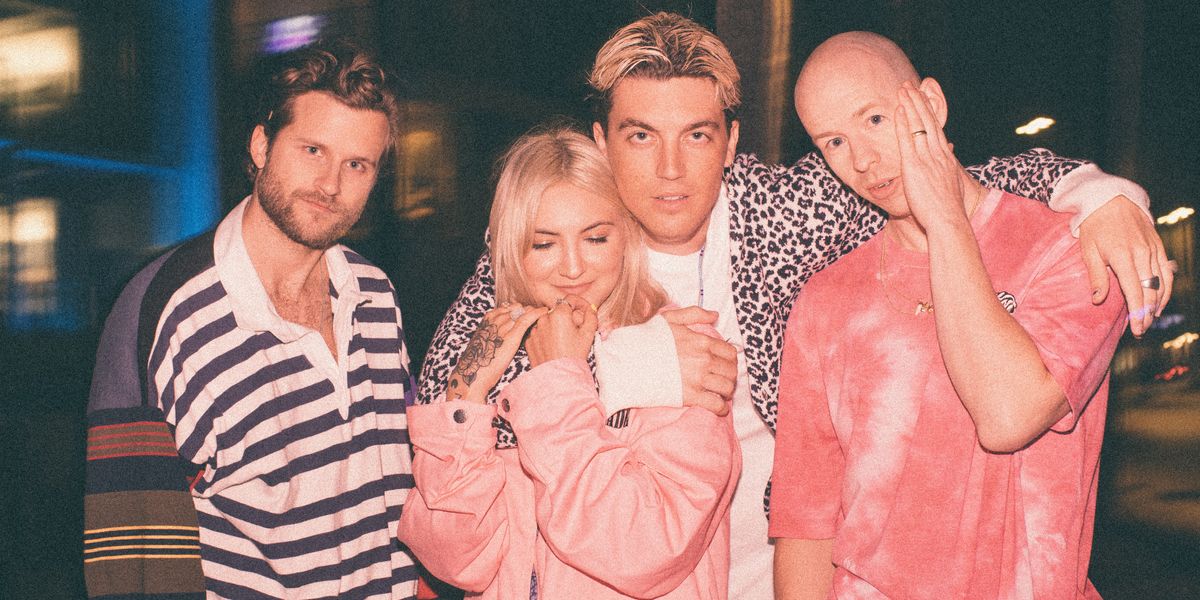 In Conversation: LANY and Julia Michaels on 'Okay'

"I don't want this to be my last time in this apartment," Julia Michaels and LANY frontman Paul Jason Klein sing eagerly in the first verse of their new song, "okay." Their voices, in carefully offset harmony, are supported by a pulsating vocal sample; acoustic drumstick hits build anticipation, and then allow it to plateau gracefully near the chorus. What starts out as a careworn tune over love lost, arranged with the same tonality of LANY's sophomore album, Malibu Nights, turns into cooled conversation, while an uncertain hope hangs over both singers.

"Okay" is the type of modern alt-pop groove whose success depends upon the right artistic visions to package the final product in the least trite way possible. Perhaps there are no two better actors to do so than Michaels and Klein. Both of them tour on monstrous individual schedules, delivering what feels like stadium-level energy to crowds in theaters across the United States; Michaels is even currently the opening act on P!nk's Beautiful Trauma World Tour. They've only been able to do so by cultivating unique voices in each of their respective works, voices that can easily reexamine past heartaches and evaluate current emotional tumult.

Despite penning for pop's heaviest hitters for years, cowriting hits like Justin Bieber's "Sorry" and Fifth Harmony's "Miss Movin' On" Michaels only emerged as a performer with 2017's "Issues," just several months prior to LANY's debut album release. The newness of their careers also contribute to the genuine ease with which "okay" approaches listeners' ears: Michaels and Klein have begun cultivating their voices in an age where artistry is valued over radio-readiness. This could point to why hurt, recovery, anxiety, and love are topics that both write about openly, bearing all in the studio and thus on a stage during an album cycle.

The aftercare required to recover from a heartbreak, for both parties involved, is a theme that ended up being explored in-depth on LANY's Malibu Nights, and touched upon more subtly in Michaels' Inner Monologue, Pt. 1 EP. The new collab from the alt-pop chart climbers, however, feels like a capstone on both of these projects. "Okay" is a tensely optimistic bop, the first reveal of the mending skin underneath an Earth-shattering-sized breakup Band-Aid. "Okay" is cautiously uptempo, with plunks of beachy synths accelerating the duo's main question: "I'm gonna be okay, right?" Although unanswered, the sure response is: yes.

PAPER caught up with Julia Michaels and Paul Jason Klein to discuss the early 2018 origins of the track, the recording process, and how they each find solace in expression through pop songwriting.

How did "okay" come about and how did you meld your sounds together?

Paul Jason Klein: So we actually wrote the song in maybe January 2018?

PJK: It was during the time that I was taking a lot of sessions and working on Malibu Nights. I always loved the song so much, but just being in a band and putting out your second album, it was important that it was all LANY, if that makes sense? I wasn't ready to have a collab. It was important that we solidified who we were as a band, first, and I knew that Julia had to be on the song singing with me. Once we put out Malibu Nights, I actually put out a bunch of outtakes on my story on Instagram of little moments from writing the songs. I put this clip up of the chorus, of Julia and I in the studio. It was probably the most reactions I've ever got to a story. People were like, "Where the fuck is this song? Why is this not on the album? Blah, blah, blah." I immediately called Rupert, our manager, and I was like, "Yo. I think we should put out some B-sides or something." We just kept talking about it for a couple of months and then finally Julia and I got in the studio again to write some more songs and then decided that we would fully cut her vocal in on the song. I went and produced it with the boys, and here we are.

Julia, were you a LANY fan before? How excited were you to get on this and get this out there after having to wait on it through the album cycle?

JM: I was totally a fan before, I remember when I first heard "ILYSB." I was in this car, and I was like, "Holy shit. What is this?" I had known about Paul, but it was just through mutual friends. We had never met until we wrote together, when we did "okay," actually. He was going through a lot, and it was just one of those days where you talk about anything and everything, just for the sake of the song. There was a point where he looked at me and was just like, "I'm gonna be okay, right?" I was just like, "Whoa. We need to write that, right now." And so we did.

PJK: Obviously, getting your heart broken is one of the worst feelings in the world. I don't wish that on anyone or myself again. I do think we're in an industry and have a job where we're lucky enough that we can do something with it.

JM: Yeah, we have an outlet.

PJK: We can make something cool from it. All of my favorite songs, some of the biggest songs in the world come from this really pure, honest place. I don't plan on writing heartbreak songs for the rest of my life, I'd like not to be broken. I think you just write from the place that you're at, and it's kind of your responsibility, if you want it to be, as a songwriter — to live in that moment and come to terms with all the emotions. Then you try to articulate them, because writing songs is a gift. Not everybody can do it. Being able to put feelings into words and articulate, it helps other people because some people can't put it into words, but then you do it for them. Then, they talk it out with themselves.

With the chorus, "I'm gonna be okay, right? I wish I could tell myself that at night," it almost sounds like a conversation between two people who are trying to find the words to express it. What was the writing process like, beyond the track's initial inception?

PJK: I'm not just saying this, Julia is probably the most impressive melodic writer I've been in a room with.

PJK: Everything about her melodies are completely unorthodox, and a lot of times it will even take me a second to figure out where she's going with it. Then, it locks into place, and it's so unique. She's insanely talented in that regard!

PJK: It's true, obviously. Look at her credits! I think that I can put things into words OK sometimes.

PJK: Literally. Whatever I said, she was just like, "Write that down!" One thing that I had never really experienced is that I had built this chord progression around a BPM, the tempo of the song, and she just went on the mic and sang circles around it. I'd be like, "I love that! Sing that again, let's piece that together." Then, we built the lyrics into that. It was cool.

"Julia and I were the only two in the room. That's really rare, you'd be surprised."

I'm sure seeing that happening would probably be a fan's dream, to see two songwriters come together and create like that. What kind of themes do you want to get across to your fans through the song?

PJK: Also, I just wanted to chime in — I think one of my favorite things about this is that Julia and I were the only two in the room. That's really rare, you'd be surprised. A lot of times there's five or six, you spend one day with three people and three other people try to jump on the track. That's how you keep things really pure and not diluted, it was literally just Julia and I in the room. That's really sick, and something I'd like people to know. As far as fan bases and stuff, this song is only gonna make us bigger and take us further. You never know if a song's gonna blow up or if a song's gonna go viral. At the end of the day, if you believe in the song and it's good, it's only going to reach more people. That's really my only expectation for it. I love the energy of it and I like the pace of it, I think it's a perfect summer song, and it's really not sad. It's kind of a bop.

JM: The thing that we hope people take away from it is that there's hopefulness and that, even though it's a question, it's still hopeful. Heartbreak happens and it's inevitable sometimes, but there's that hopeful aspect about it.

You were the only two people in the room. When it's multiple people, that process must feel diluting sometimes. What things do you wish would change about the traditional writing process?

PJK: Well, people can do whatever they want.

JM: I think it's cool, too, because it's a song where there's two perspectives saying the same thing. It's not just one person that hurts when they're going through a breakup. It's both, it sucks for both sides and both people. There are moments where you really miss somebody or you want to tell them that you love them and you feel like you shouldn't. You're questioning if you're going to be okay, even if you're the one doing the breaking.