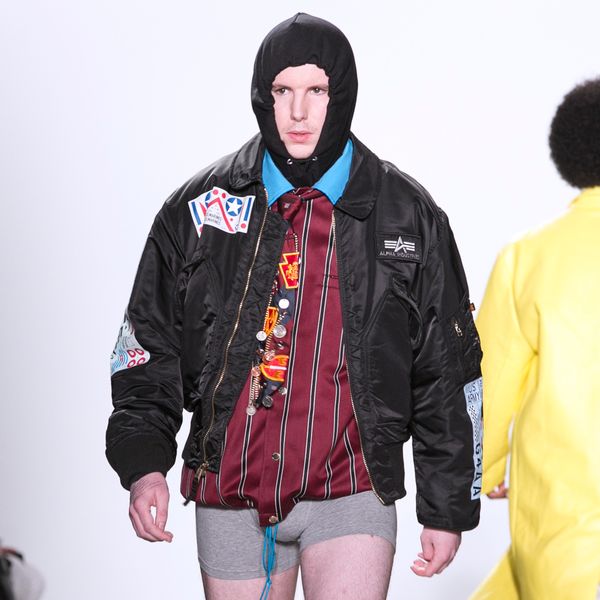 Back to School With Landlord

Designer Ryohei Kawanishi launched his menswear label Landlord in 2015. Originally from Japan and now based in Harlem, Kawanishi is an alum of both Parsons and Central Saint Martins. The menswear designer often artfully mixes streetwear with unconventional references (like this season's take on adult academic looks). Along with that, his work has also been exhibited in museums worldwide, including MoMA (2017); Museum of Arts and Design (2017) and Somerset House in London to name just a few. Here's everything else you need to know about Landlord's fall 2019 show.

What would an Ivy League uniform look like if it were reinvented with a streetwear sensibility? That's what Kawanishi was thinking of when designing his fall 2019 collection, along with what it might look like when taking personal style cues from kindergarten to graduate school students into consideration. The collection consisted of pieces rendered in striped school uniform fabric, herringbone bomber jackets and structured sweatshirts, jackets with plenty of utility pockets and wool sweatpants.

For this first time, Landlord collaborated with Mike the Ruler, a teenage Instagram star who often styles himself in outlandish streetwear outfits. He styled the show and did all of the casting, too.

A neon theme ran throughout the show, seen in knee-high socks, hems and belt bags, but the biggest statement of all were the vibrant neon leather coats in electric green, orange, bright yellow and laser point blue. The designer called it the focal point of the collection.

The money-inspired jewelry was a standout on the runway. Designed by recent Parsons grad Kota Okuda (who showed a money inspired collection at the school's MFA show last fall), the pieces mixed neon with dollar bills and Lego-like blocks for a playful, childlike appeal.