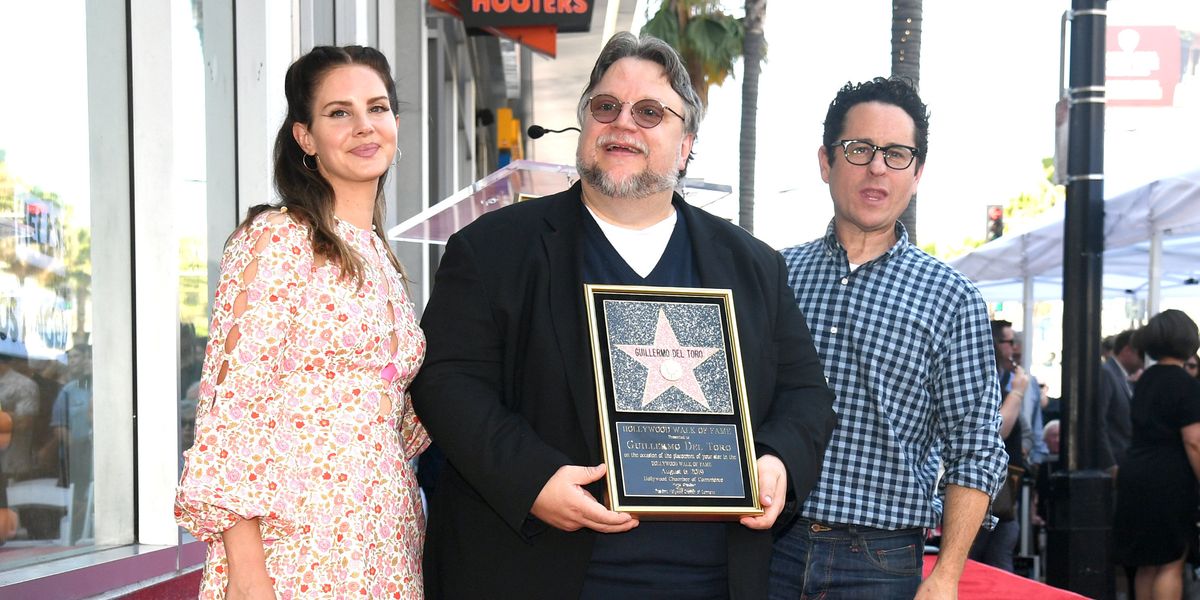 Lana Del Rey's been all over the news leading up to the release of Norman Fucking Rockwell at the end of the month. She's been dropping chaotic good album trailers, clamoring to play Priscilla Presley in the new Elvis biopic (which sadly won't star Harry Styles), covering Sublime and producing witchy songs for cult classic horror remake soundtracks. Extremely Lana shit.

She's given us two gifts this week: a video of her presenting Guillermo Del Toro with his Hollywood Walk of Fame star, and a brand new folk song, in response to the weekend's pair of mass shootings in El Paso, Texas and Dayton, Ohio.

Lana Del Rey and Guillermo's friendship was a revelation to most, when both announced on socials this week that the pop star would present the Pan's Labyrinth, Shape Of Water, Hellboy director with his star. Then everyone thought about it for around 10 seconds and said, "Yeah, that checks out." They both love spooky shit, fairytales and Catholic imagery, and Lana loves anything considered a "classic" or a "legend," like Guillermo. Also, a Spanish accent. Also, they have the same middle name. Th pair must have bonded over witchcraft and rosaries, because prior to the ceremony, Lana released her cover of Donovan's 1966 cult classic, "Season of the Witch," which'll be featured in Guillermo's new film Scary Stories To Tell In The Dark.

She did the deed alongside another of the filmmaker buddies, sci-fi director J.J. Abrams, giving Guillermo a sweet tribute, and revealing she's a longtime fan.

"Although it doesn't take anybody special to realize how wonderful these movies [The Shape of Water, Pan's Labrynth, Scary Stories To Tell In The Dark] are, it really does take a special kind of man to dream them up. A man who is as kind as he is deep, and as wise as he is fun," she said.

At this point, a heckler interjected, apparently doubting Guillermo's wisdom. She shot back "Yeah, very wise! Shape of Water! Wise! Wise! Wise! In a culture of sameness, he's completely himself, and that's the greatest lesson I get from all of his tales... It's a beautiful thing to be reminded that being different is to be celebrated." (Her speech starts at 8:40).

The same day, she shared a new song that she wrote spontanously after the weekend's bloodshed, and called Jack Antonoff into the studio to perform. It's a short, acoustic ballad, just her on vocals and Antonoff on guitar, she names various American cities and laments how violence ("Would always watch the children in the park/ Used to only worry 'bout them after dark"), and how it dims the glow of the "classic" Americana she's so infatuated with ("Used to go to drive-ins and listen to the blues/ So many things I think twice about before I do.")

It's not yet officially released, but she plans to call it "Looking For America."

"Hi folks came back early from Montecito with my brother this morning and asked Jack Antonoff to come into town because I had a song on my mind that I wanted to write" she wrote on Instagram. "Now I know I'm not a politician and I'm not trying to be so excuse me for having an opinion- but in light of all of the mass shootings and the back to back shootings in the last couple of days which really affected me on a cellular level I just wanted to post this video that our engineer Laura took 20 minutes ago. I hope you like it."