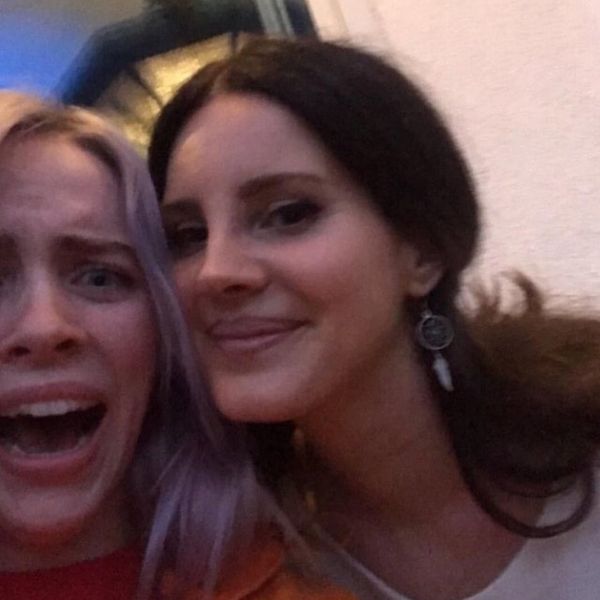 It's a classic music journalism move to ask old-guard superstars how they feel about the hot young artist of the day, in order to suss out if they get it or not. Of course, Billie Eilish is currently the go-to litmus test.

Of course, the test doesn't work that well because pop stars are trained to say nice things about their peers, but Lana Del Rey's resounding endorsement of her freaky pop girl spawn sounded pretty sincere. When asked if she keeps up with Top 40 pop in her recent New York Times interview, she heaped praise on Billie:

"I love Billie Eilish, and I feel like I've been waiting for this time in pop-music culture. I personally am very discerning. I can tell if a female pop singer, for instance, has a generosity of spirit or a playful fire in her heart. With Billie, she's prodigious. I needed to hear one line of one melody and I just know."

It makes sense: they're the two least weirdest girls to come out of pop since Madge herself and they've long been understood in a lineage. Lana is one of Billie's biggest influences, along with Justin Bieber, Avril Lavigne, Childish Gambino and Tyler, The Creator. For a while, Billie was being heralded as "the new Lana Del Rey" until she put that sticky title to bed, telling the Los Angeles Times: "Everybody's always trying to make everybody compete... I don't want to hear that Billie Eilish is the new Lana Del Rey. Do not disrespect Lana like that!"

It's certainly higher praise than this garbled response she gave about Taylor Swift. Upon realizing their Jack Antonoff-produced albums were coming out within a week of each other, she said simply: "Oooh. Well, it certainly makes me think more about what the [expletive] I'm doing with my life."

Lana's not really the type — though she will be shortly dropping a collab with Miley Cyrus and Ariana Grande for the new Charlie's Angels remake — but it can't hurt to ask... collab? There is photo evidence that the 34-year-old and the 17-year-old have met each other, so you never know.

Norman Fucking Rockwell drops in less than 12 hours, y'all. Because she's sweet to us, Lana just dropped a King Kong-inspired video for her legendary Sublime cover, "Doin' Time."