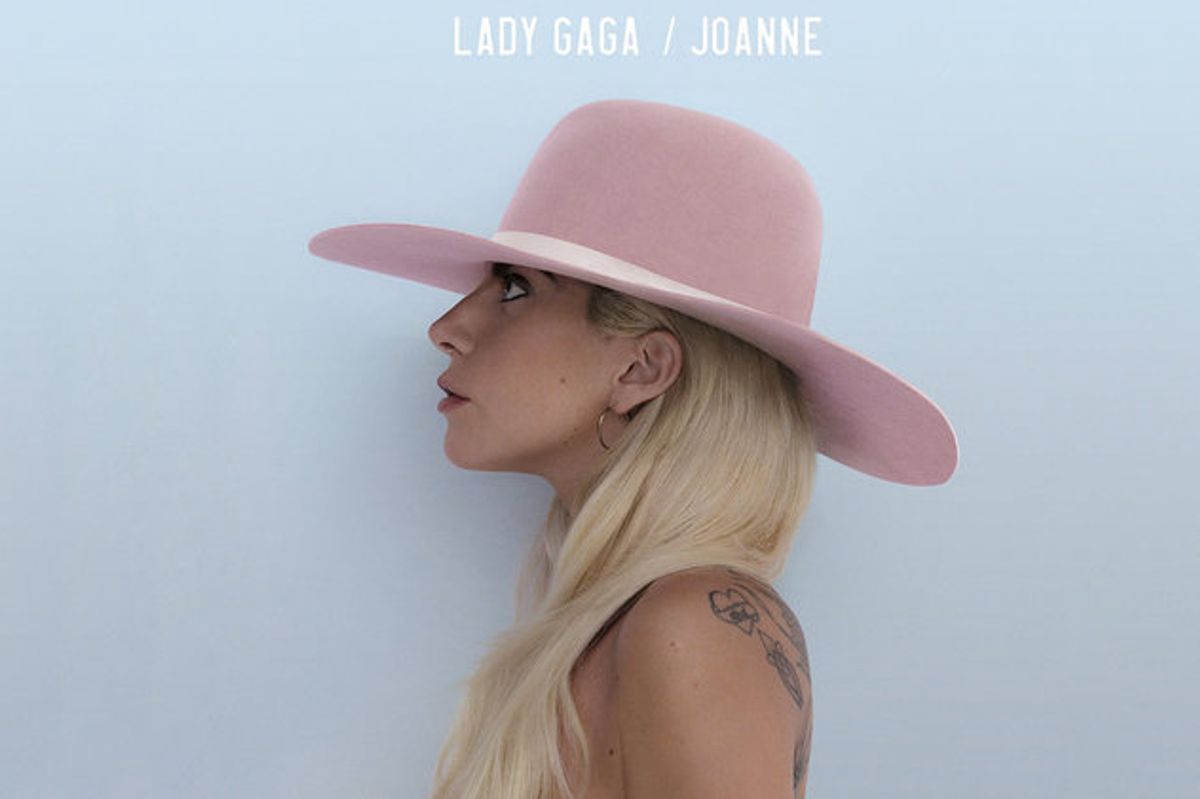 Stefani Joanne Angelina Germanotta has released her fifth studio album, and first pop album since 2013, Joanne, in all it's bizarre, wheatfield swayin', messy glory. The 14 song LP is Gagz's foray into a pop rock-country tinged hybrid, and admittedly, after some initial recoil (she has put me THROUGH it this month), the album has a whole is pretty damn good.

Darn good, I should say.

Gaga's vocals sound better than...ever, with little or no distortion; there is something for everyone. For all (raises hand) that Gaga wouldn't have her trademark synth-heavy spooky sexual camp heaven, rest assured, it's in there (Hello, "Dancin' in Circles"). Did anyoe want Stevie Nicks with Radiohead as her backing band? It's in there, too (title track, "Joanne"). How about a Phil Spector/Ronettes/Bruce Springsteen freakshow? "Come To Mama" is ready. Don't forget her Elton John-esque duet with Florence Welch, "Hey Girl"--it's all in there.

In a somber, timely reflection Gaga's closing track "Angel Down" was written in response to the murder of Trayvon Martin, at the hand's of human plague George ZImmerman. Gaga explained to Zane Lowe that her sense of duty to express this ongoing crisis of police and civilian brutality of African American men and women is doubly urgent with the concern from a large part of her fanbase, people of color. The song is her reflection on this global confusion and heartache happening every day:

[There is an] epidemic of young African Americans being murdered in this country. I was overwhelmed by the fact that people just stood around and didn't do anything about it, and that the justice system continues to, over and over again, not seek justice for these families. [I have] my ear to the ground of my fans, young African American women and boys who are terrified… they tell me they drive in their cars, and when they hear a siren there's a paranoia that runs through their body, that they freeze up that they can't think. This is a tremendous anxiety. This is something I care about. This is something that has to stop, something we all need to heal from.

I can only hope my voice and the lyrics will reach people. It's also a complicated thing. I'm not an African American woman, so how do [I] speak about those things? It feels impossible; how can I not say something. How could I possibly make an album about twerking my ass in the club? In my mind, I can't reckon it. It feels empty. It feels irrelevant. When I go into the studio and I write, at this moment in my career, I can't possibly think of, 'Oh, what would be just fun'… we all [can't escape the truth], no matter how much we want to just have fun. The more we mask the shame of this anxiety, the harder it's going to be to heal.

On a full scale, the album, which also features Josh Tillman, Beck, Josh Homme, and production throughout from Mark Ronson, Kevin Parker, Hillary Lindsey, and Bloodpop, is a stark departure from the expectations we've come to place on Gaga, which seemed to be the very antithesis of her original persona's essence: expectation. In her Fame and Fame Monster days--and even Born This Way--we had zero idea what (often bloody) jaw-dropping on-stage antic or terrifying, horror pop track (I still miss you, Bad Romance) she'd release next.

Maybe, as our culture moved into this more jaded era of cynicism, of think pieces for things that aren't even a thing yet, we grew a little weary of Lady Gaga, the character. Joanne feels like a remedy for that skeptic-laden sentiment. It's not "Bad Romance," no, or "Alejandro," "Dance in the Dark," "Government Hooker"---not even "You and I" or "Speechless." And part of me still wishes it was--those glorious days of Gaga's uber-queer, theater kid Andrew Lloyd psychosexual drama that **personally** greatly impacted my gay pop culture identity. Her songs were both silly and supernaturally infectious, and often times chilling in their power and transcendent hooks and choruses.

Is Gaga's cowgirl act she's pedaling out now often shocking in side-eye factor? Absolutely! But Joanne, as music, is still fundamentally Gaga: the expectation defier. That's what a pop star does. She does, indeed, still have the range.