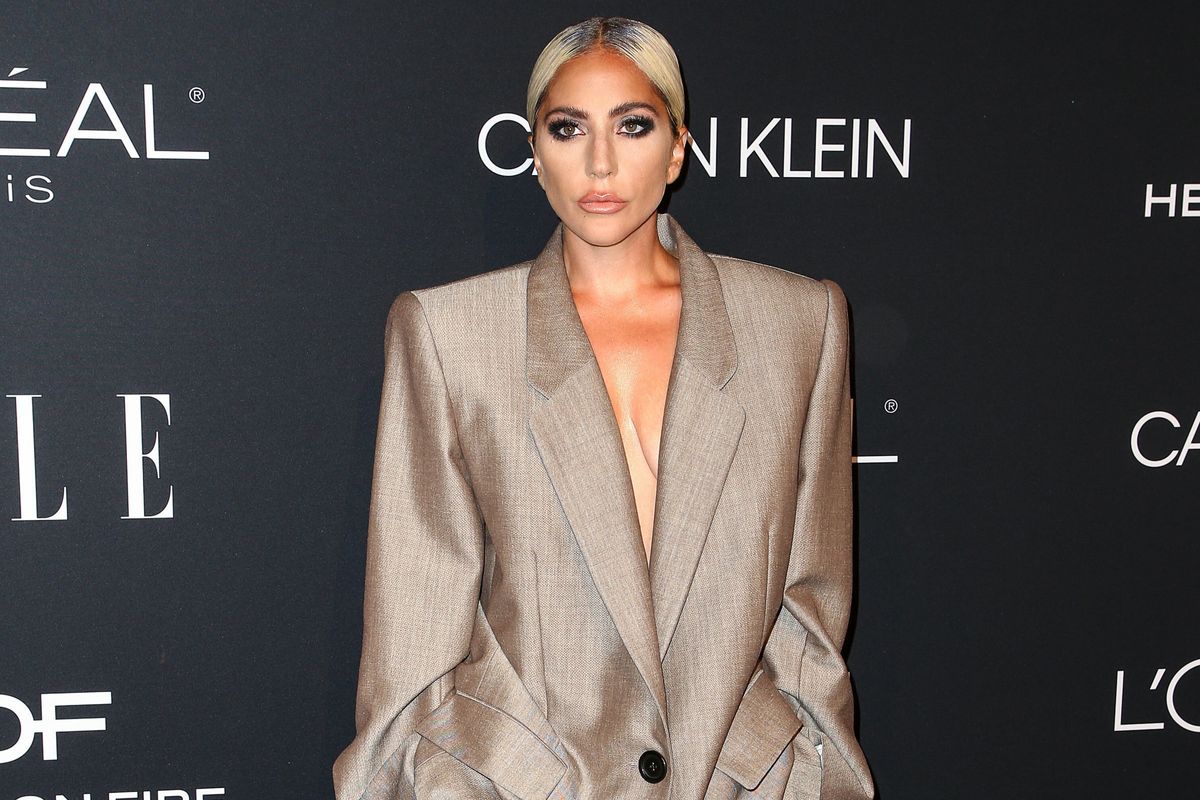 Last night in Los Angeles, Lady Gaga was honored at Elle's Women in Hollywood reception. And in a moving speech, she talked about mental illness and her own sexual assault (and confirmed her engagement to agent Christian Carino). Gaga also dedicated a significant portion of her time to explaining the ethos behind her outfit, an oversized Marc Jacobs suit that stood in stark contrast to the dramatic, Old Hollywood-style gowns she's sported through the A Star Is Born press tour.

"I tried on dress after dress today getting ready for this event, one tight corset after another, one heel after another, a diamond, a feather, thousands of beaded fabrics and the most beautiful silks in the world. To be honest, I felt sick to my stomach. And I asked myself: What does it really mean to be a woman in Hollywood? We are not just objects to entertain the world. We are not simply images to bring smiles or grimaces to people's faces. We are not members of a giant beauty pageant meant to be pit against one another for the pleasure of the public. We women in Hollywood, we are voices. We have deep thoughts and ideas and beliefs and values about the world and we have the power to speak and be heard and fight back when we are silenced."

Gaga added that she tried on dresses from designers like Dior, Raf Simons for Calvin Klein, Rodarte, and her former stylist Brandon Maxwell, but that none felt right. The suit felt right. "In this suit, I felt like me today," she said. "In this suit, I felt the truth of who I am well up in my gut. And then wondering what I wanted to say tonight become very clear to me."

She continued, "As a sexual assault survivor by someone in the entertainment industry, as a woman who is still not brave enough to say his name, as a woman who lives with chronic pain, as a woman who was conditioned at a very young age to listen to what men told me to do, I decided today I wanted to take the power back. Today I wear the pants."

Gaga isn't alone in her assertion that pants equal power. Legions of women, especially throughout the 20th century, wore suits to assert their equality in the workforce: consider the classic '80s power suit look (which Gaga's suit parodies), the Teddy girls and zoot suit-wearing pachucas of the 1950s, Coco Chanel's timeless invention, the female factory workers of World War II. It is 2018 and women wear pants all the time, and yet wearing a suit to a formal occasion still presents as something of an event.

Related | Here's Why Blake Lively Only Wore Suits For a Month

Promotion for A Star Is Born has gone on for months, and Gaga has conjured up evocative, breathtaking looks for nearly every premiere or press junket, starting with her entrance to the Venice film festival on a boat in a black Jonathan Simkhai mini-dress and winged eyeliner, like Bette Davis at the beach. Her outfits have purposefully recalled the style of stars gone by: a white dress and platinum hair in Venice for Marilyn Monroe, an Armani veil for a femme-fatale from a 1940s noir. The Marc Jacobs suit recalls another Old Hollywood star: Katharine Hepburn, who famously told Barbara Walters that she'd "wear a skirt to your funeral."

Hepburn was a star who seemed franker and less buttoned-up than her peers, a quality due in part to her style (she wore trousers at a time when women could still be arrested for sporting pants in public). But she was still opaque and still wholly in control of her image, conscious of what she said with her clothing. In her Marc Jacobs, Gaga did the same.