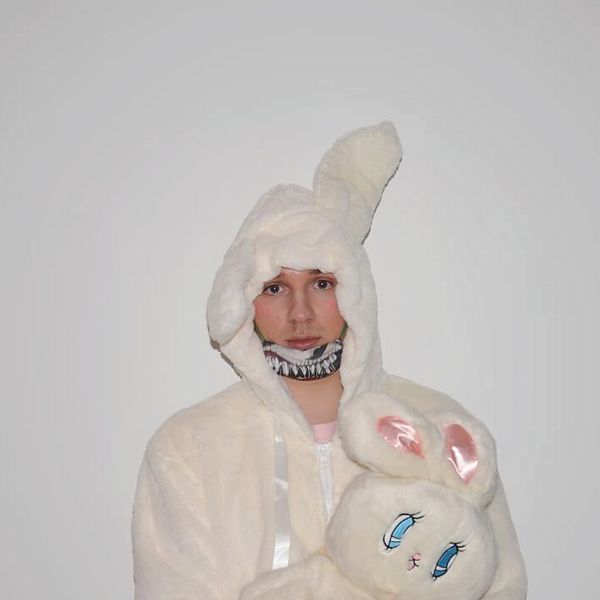 Kyunchi Is Making MySpace Music for 2019

Originally from Russia, Kyunchi splits the year between New York City and Tokyo. But really they live on the Internet — more specifically, the Internet of the past. The bedroom musician is helping lead the #20ninescene revival by making what they call "Myspace music for 2019:" cyberbops that reference Millionaires, Jeffree Star and Mean Girls. Yearn for a more innocent time.

Alongside the likes of Slayyyter and Ayesha Erotica, the internet native is making music that's nostalgic and futuristic at the same time. We'd have it autoplaying on our profiles for sure. Maybe even put them in our Top Eight. xD.

PAPER met up with Kyunchi in New York to talk more about the early days of social media, and their enduring influence on pop culture.

I just remember being like a site model, in high school, and I'd design graphics for people.

Why do you think we're getting so nostalgic for that time right now?

Right now I think it has to do with the political climate. People want to go back to a time where everything was semi-normal, it wasn't perfect back then but it was better than what we have right now. I think a lot of my personal happiest memories were from that time. Although a lot of Myspace music I only got into when Myspace was dead.

I think it's the same for a lot of people. The Internet felt very free back then. It sucks because most of it is lost now, I didn't archive any of my Myspace.

It just kind of disappeared! It's really sad.

How are you developing your Myspace sound, and what does that mean exactly?

Charli XCX is an interesting example to talk about because she's very nostalgic even though her music is super futuristic.

That's kind of where my head is at too. Not so much that I want to sound like her, it's kind of like the same blueprint but making a different model. I conceptualize a lot, think a lot about the atmosphere of a song, I really come up with a concept first. "Beauty Guru Fantasy" I knew I wanted to be about YouTube. And that's where it all came from. I'm working with Ayesha and she's a fantastic producer and songwriter — she has a better eye for it than I do and helps me put it all together and make my vision come alive.

As you've started marketing yourself as a Myspace-style artist, have you found other artists trying to do the same thing?

Yes, a lot of people have been contacting me, saying they love that MySpace sound, this is what I want to do. I'm encouraging people to pursue it, because Myspace music really was all about community, after all.

You're touching on a feeling of having missed out on Myspace slightly, and I think that's really common.

Yeah, some people say, "I wish I could have gone to Woodstock!" And Myspace is the new Woodstock.

I remember being really into emo and scene for a while but never actually fully participating, like I wasn't actually scene myself, I just knew a lot about it.

Yeah, you'd be like, I wish I was part of the group. But nothing is stopping us from recreating it now!

"Myspace is the new Woodstock."

I really like "Regina George." It taps into nostalgia for a similar era.

Thank you so much. We all just wish we could go back. I'm already working on part two of that song, and it's going to be called "Paris and Nicole." I definitely want to make a double album, half of it pure MySpace music. I want to do a collab with Melissa Marie. She's the original Myspace Queen. And then a second part that's more futuristic. I'm actually also working on a J-pop song too. I want to show my love for Japan in my music.

There's a big intersection between MySpace music and K-pop, J-pop.

Yeah because you know Japan was a huge part of MySpace, too. A lot of Americans discovered it that way. Back then it was an edgy thing to listen to.

So what can we do to make the #20ninescene movement happen?