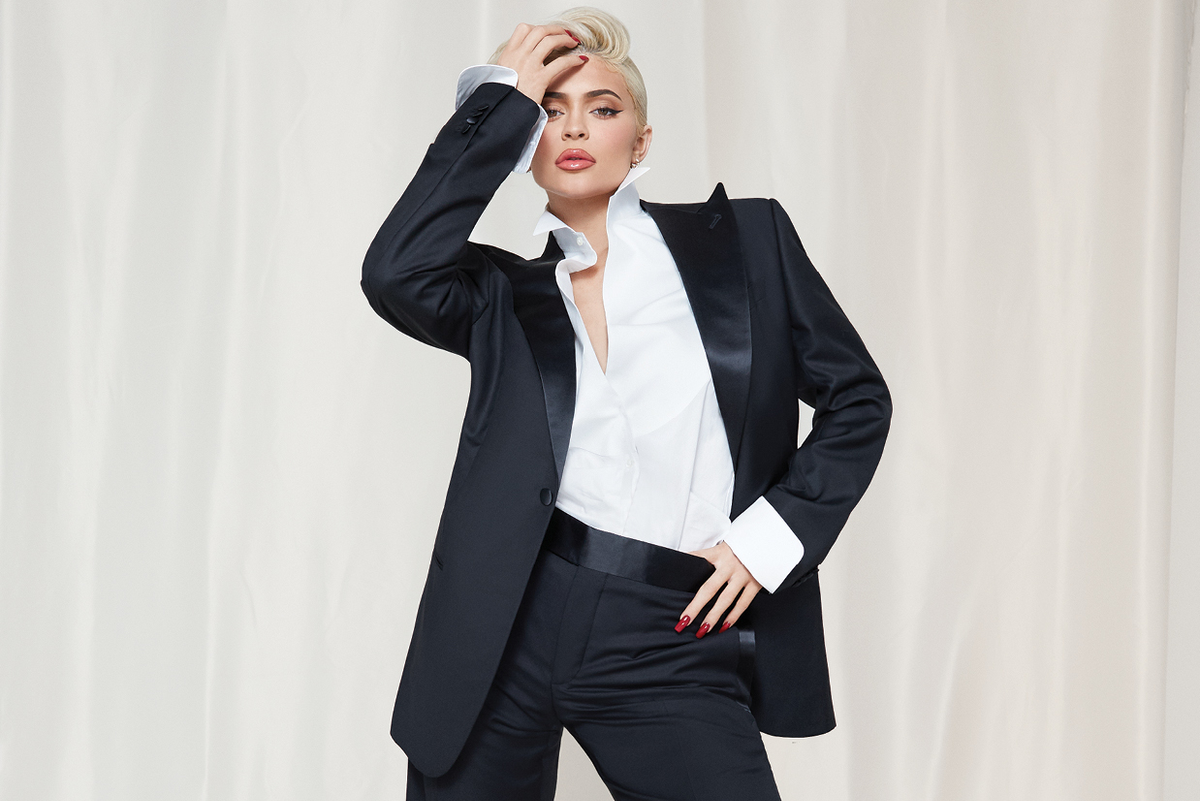 Kylie Jenner knows we've all wondered out loud who her plastic surgeon is. She just doesn't care. Once one of the more unassuming members of America's most famous family, these days her arched eyebrows and permanently pouted lips — sculpted and painted according to the impossible ratios of beauty YouTube and augmented reality apps — transfix hundreds of millions of eager fans and are ubiquitous on every feed. The 21-year-old makeup mogul says her dramatic transformation (from private teenager to public businesswoman, from demure girl-next-door to bombshell) was a conscious one, and more considered than you might assume. She's happy to talk about it.

"People think I fully went under the knife and completely reconstructed my face, which is completely false," she explains to me over the phone, casually and with little prompting. "I'm terrified! I would never. They don't understand what good hair and makeup and, like, fillers, can really do." I'm eager to indulge in the fantasy that anyone can look like Kylie Jenner if they just watch enough tutorials about crease application, and tell her as much. She gently interrupts. "I mean, no," she says with a conspiratorial laugh. "It's fillers. I'm not denying that."

On Instagram, where she reigns supreme, Jenner comes across as coy. Her captions are minimal, her grid curated, her selfies serious. In conversation, though, she's surprisingly relaxed and generous and upfront. A cool girl with fillers in her face who is down for whatever. She's genuinely excited to discuss her formerly secret daughter Stormi, and says young motherhood has changed life entirely for the better. "It's genuinely what I wanted... to be a young mom," she says. "I thought, This I what I want to do, and if people accept it or don't accept it then I'm okay with every outcome."

Two days before our interview, she recalls, the 11-month-old took her first steps — with father Travis Scott present. Jenner gushes about him, too. He's a great dad, a "big kid," a fantastic partner. To put rumors to rest, they aren't married yet, or even engaged. Don't expect her to keep something like that a secret. When it happens, and she seems certain it will soon, "I'll let everybody know." With Kylie, you can usually expect fanfare. A few weeks after we speak, she throws an overtly aesthetic Astroworld-themed birthday celebration for Stormi, involving elaborate Instagrammable neon photo backdrops and custom merch in pop up stalls. Guests enter through the mouth of a giant balloon in the shape of her daughter's face. They eat fries from pink cartons covered in Louis Vuitton-Stormi monograms. DJ Khaled, in attendance, gifts one-year-old Stormi her very first Chanel bag.

"What I'm trying to say is I did have a platform, but none of my money is inherited."

Now that we've got the plastic surgery slash secret pregnancy talk out of the way, what Jenner really wants to discuss, with the authority of the eldest girl at the slumber party, is makeup. Its mysterious power. Makeup has made her unfathomably wealthy, and has given her purpose and identity outside of the Keeping Up With the Kardashians sphere. She's in awe of the famous makeup artists she is privileged to regularly work with and laments the fact she'll never be as good as they are, exuding way more modesty than is necessary — watch any of her "getting ready" tutorials and feel something at least proximate to awe. Even before it became her business, she explains, lipstick was her almost singular hobby, an "obsession" she didn't necessarily intend to monetize at first. Of the now-iconic lip kits that started it all, Jenner says she never did any consumer research, "wasn't educated on what the beauty business really was," and never even stopped to observe what the big brands were putting in drugstores. She simply "followed her heart" and invented the exact product she wanted to buy.

"I just knew for myself as a customer, like, why am I buying a lip liner and a different lipstick? I wanted it the same color, I wanted it to be easy," she recalls. "And I really spent every last dime that I had starting it, not even knowing if it would be successful."

In 2018, when Forbes predicted Jenner would be crowned America's youngest self-made billionaire within a year, the Internet understandably bristled. But while Jenner definitely exhibits the blithe financial attitude her detractors would expect ("I don't define myself by how much I have. I honestly don't wake up even thinking about it") she is able to acknowledge how certain Kardashian-related privileges gave Kylie Cosmetics an edge other fledgling beauty brands would kill for. "I had such a huge platform, I had so many followers already and I had so many people watching me," she admits. Still, she's eager to assert that "the self-made thing is true." Her parents "cut her off at the age of 15" and told her to start making her own way, and Jenner says that since then she hasn't received a single cent.

"My parents told me I needed to make my own money, it's time to learn how to save and spend your own money, stuff like that," she explains, taking her time to think through the statement. "What I'm trying to say is I did have a platform, but none of my money is inherited."

Jenner has been trying to curb her social media use, lately. Her screen time has "been going down 20 percent" each week, according to an app on her phone. But she also knows that social media is her "advertisement, the way I show my products." She doesn't feel guilty about exposing her young followers to a filtered vision of beauty that apparently requires millions, close to billions, of dollars to achieve; isn't losing sleep over the occasional piece of diet pill sponcon. Just hopes fans know that she's "trying to set a good example." The pursuit of prettiness has enriched her life, and she believes it can help others, too. When a woman's reflection matches the mental image she holds of herself, Jenner's transfixing, selfie-laden success story seems to imply, she is free to go forth and conquer.

"Makeup is something that makes me feel empowered, makes me feel good, and I think it's such a positive thing," she says, with an earnestness that's nothing if not compelling. "There's no harm in playing around with it and feeling good about yourself." Maybe the fillers are optional, after all.