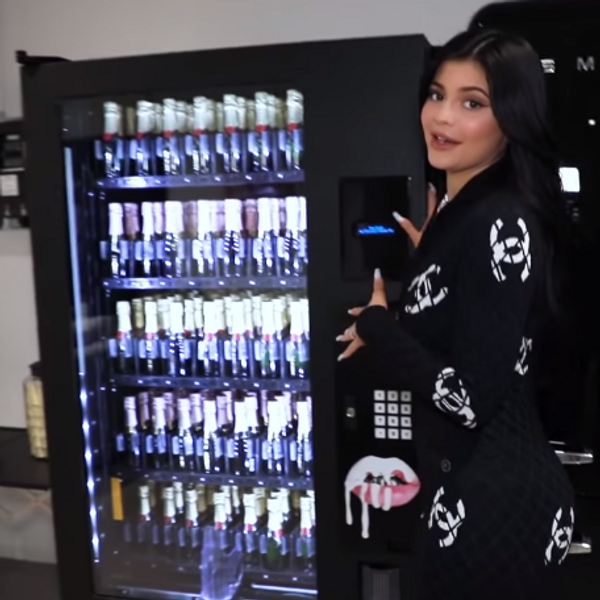 Kylie Jenner's latest YouTube video is a tour of her millennial pink Kylie Cosmetics office space, and an unintentionally spooky one at that. Even though the warehouse building is massive, we do not see a single employee. (According to Jenner, everyone's at a meeting "offsite," but I'm suspicious.)

What we do get a glimpse of: fur-covered chairs, stacks of Kylie's favorite magazine covers (including her two PAPER shoots), and a goddamn Moet champagne vending machine for visitors. Jenner says she hasn't used the vending machine herself, but vaguely adds that "I've seen some people get champagne for sure." Ah yes, "people." Very worried that this entire "office" is just an elaborate set?

The greatest mystery presented by the video, ghost Kylie Cosmetics employees aside, occurs at 4:33. Jenner approaches yet another vending machine, this one filled with snacks and soft drinks. There's oat milk, cartons of her ex-boyfriend Jaden Smith's eco-friendly Just Water, and a yellowish drink with its label blurred out.

"I'm actually not going to show you guys this," our fave billionaire explains to the camera. "You have to blur that out, because this is my favorite drink and it's really hard to find, it's always sold out so, I can't show you guys. But maybe I'll share my secret someday."

It's fairly obvious that the blurred out drink is Yerba Mate from Whole Foods, which isn't exactly rare, but Jenner is a businesswoman and you can only assume she doesn't endorse anything for free. This is why she has a Forbes cover and you don't!

Clocking in at almost 17 minutes, Jenner's office tour video is honestly well worth a watch. If you keep going until the end, you get to see a confused Stormi watch footage of her own birth. Check it out, below.