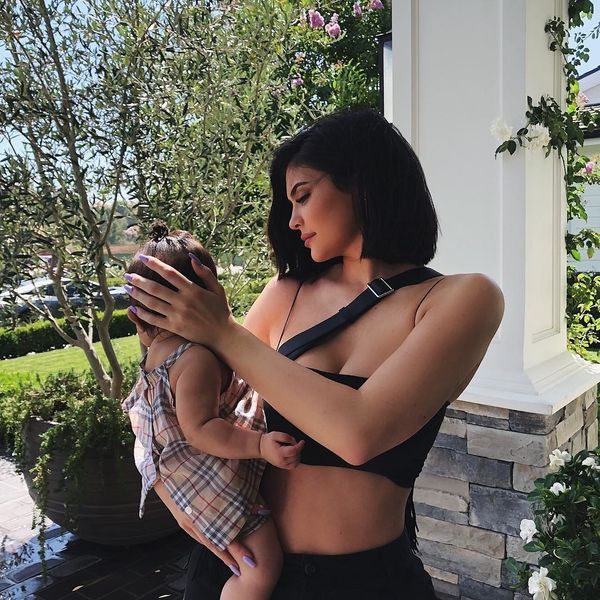 Kylie Jenner Makes Me Want to Become a Mom

There are scores of single women who will shudder at the prospect of breeding, and many who mourned what might have been Kylie Jenner's childless twenties when she announced her pregnancy in 2017, but now Stormi Webster is here and suddenly raising a wee one has taken on a whole new appeal.

Why? Because inadvertently, the Kardashians have made a baby the chic-est accessory. While this is obviously a grossly flippant approach to the miracle of new life (and the arduous task of creating a new person, birthing them and ensuring they contribute to society), the overrunning of Los Angeles suburbs of hot, incredibly trendy moms really has people like myself reconsidering the mom-aesthetic. Long gone are the obligatory spiky hair-chops, mom jeans have taken on a whole new meaning, and curves no longer need to be concealed. While your mother and mine once worried they appeared to be "mutton dressed as lamb," when wearing something you might see on a cool teen at Coachella, the new generation of moms are proving there are no rules.

To give credit where it's due, before Kylie there was Kim and Kourtney, the star's older sisters were mutually fashionable moms. Kim is best known for favoring figure-hugging styles that double as athleisure, and Kourtney exhibits pieces that any LA influencer would dream of — incorporating Instagram's most-sought after brands into a wardrobe of vintage staples and luxury pieces. Also worth mentioning is Beyoncé, who enjoys alluding to her assets with European designers with a hint of Americana, and before her, the ultimate mom-style icon: Solange, walking proof that you can make avant-garde everyday-wear.

Despite all these revolutionary fashionistas, no one has made me want to join the club like Kylie: peak mom fashion inspo. And if you, like me, aren't a 20-year-old mogul and capable of properly supporting a child, there are still ways in which you can take satorial cues from Kylie Jenner, sans the (near) billions and baby.

From sportswear to bargain staples, there is nothing that can't be given a sophisticated-sexy edge if approached playfully. Take note from Kylie's older sister, Kim, and don't be fooled into thinking comfort means sacrificing style — bike shorts have proved one of summer 2018 must-haves, and can be glammed up and down with ease.