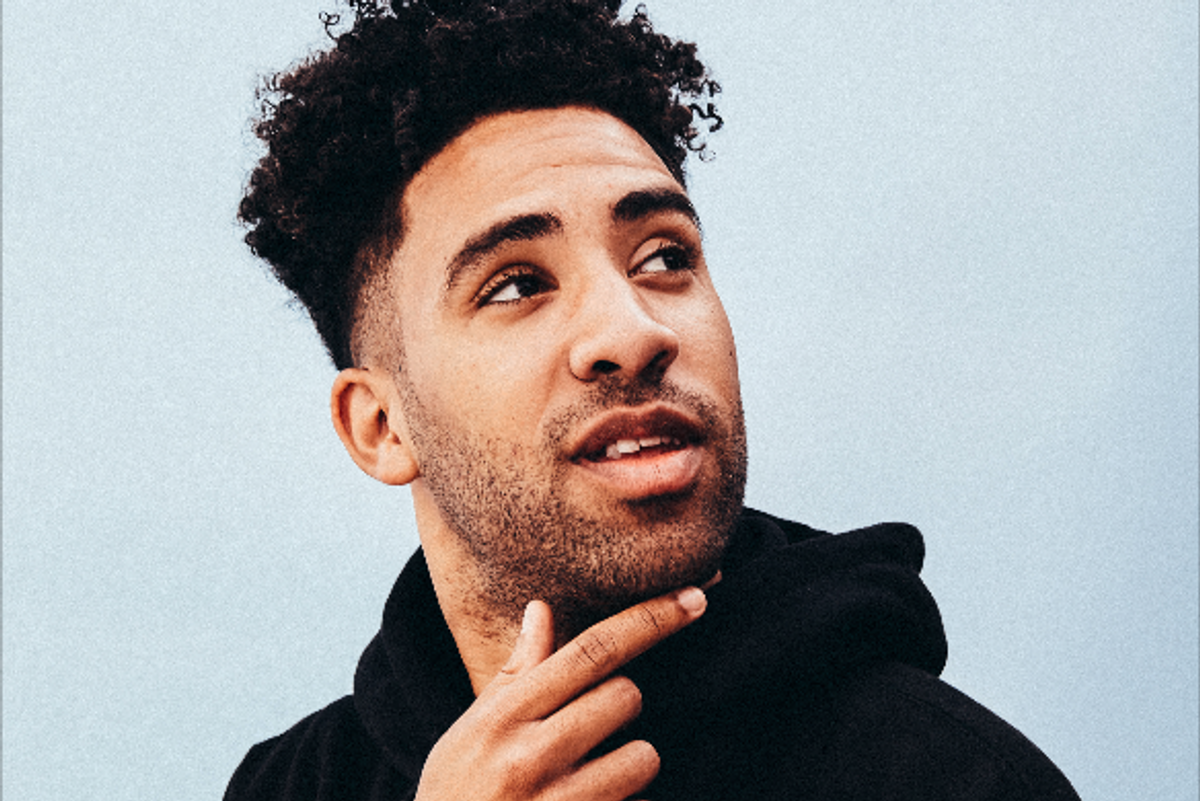 KYLE Talks Strip Clubs, Embracing His Inner Basic Bro and What Goes Down in the DM

Forget everything you know about rap, because none of it is KYLE. The self-admittedly "basic" 23 year-old Californian artist is about as millennial as it gets. He was discovered via sepia-colored YouTube covers, freestyling over Drake beats. His friendship with "bubblegum" rapper Lil Yachty, with who he now shares a Top 10 hit, came from the Internet willing the two to do a Step Up-esque dance battle. He loves Urban Outfitters.

This all may sound like a pretty bizarre background for someone trying to crack the hip-hop business, which has in the past celebrated toughness (with a healthy side of bravado, danger, and success). None of this is KYLE, who claims his worst rapper offense to be often "running late." He's not here to conform to the hyper-masculine "hard" rap tradition...and that's okay. KYLE is now two albums deep, headlining his own North American tour and not showing any sign of slowing down. We caught up with rap's favorite soft-boy to discuss Drake comparisons, Coachella-copping and how the hell he managed to pimp the Internet.

I didn't actually know you came up on posting cover videos to YouTube. Very Justin Bieber of you.

Yeah it's crazy, I feel like nobody knows that! I would cover every Drake song possible, any type of Drake song would come out and I would just go to YouTube. What I did was, when Drake dropped "Headlines," he uploaded it to YouTube and in nine hours I just made a cover and uploaded that shit first. I called it "Drake - Headlines", then I was the second video.

That is some Soulja Boy-entrepreneurship. You know he when he uploaded "Crank That" to Limewire he renamed it like "50 Cent - In Da Club," so people would download it. Then everyone heard, Yooou! and they were hooked.

That "Headlines" cover kicked off all these Drake comparisons, right? What's it like looking back at that parallel, now that you're an established artist in your own right?

You know what? My more naïve, younger self back then was always salty about Drake comparisons. I was always like, "Nah, hell no I don't sound like Drake," I would just be mad. Now that I think about it, I'm like, "Of course, duh." I sound like Drake and so does everybody else. Really, like I think it's so important to acknowledge your influences and show love and give credit to the artists you grew up listening to. I heard my first Drake song when I was like 13.

Me too, I feel like he was my gateway into hip-hop.

Yeah, deadass! Him, Kid Cudi, Wiz Khalifa, you know what I'm saying, Jadakiss, everybody. Of course I sound like all of them. That's the point. History, knowledge, culture, it's passed from one generation to the next. We all look up to somebody, we all try to be like them. We end up being our own person and take whatever it is that we're influenced by and make something new. Back then I was just like, "I don't sound like nobody" but now I'm like, "I sound like all these people."

Oh no never, like, I'm that n*gga that's outside hugging people on the street. I'm not worried about my reputation. As a rapper, everyone is so damn defensive. You don't want anyone to say you sound like anyone because we're all so damn...there's so much pride that goes into it. I was hella prideful like, "I sound like me." I didn't care about being hard.

Do you feel like because you got your start the way you did, you can subvert that whole rapper aesthetic of like "the streets" and "sipping lean 24/7"?

Yeah, I don't have to do anything or be anything than I actually am. I do be showing up late sometimes. I'm not crazy hard, I'd rather talk out a situation than knuckle up with somebody. But I do do some rapper stuff, let's see, what are my rapper tendencies...

Nah I do not be in the strip club like that. Anytime that I am in the strip club, it's always a weird vibe for me. It just sucks. Sometimes it's a fun time, but that's usually because it's the right situation and you're with the right people. But when you go with the wrong person it's kind of icy and like...

Yeah it's creepy, to be sitting down like looking around with stacks of money. It just sucks.

You say you sound like all these rappers, but is there a career would you really love to emulate? Who do you like being compared to?

Musically, I would love to emulate Outkast.

Oh yeah, they changed the game.

Completely changed the game. That's why. I would want to emulate the careers of people who did exactly what they wanted to do and it worked. They went completely against the grain and proved to people you don't have to do what everyone thinks you can do. You can do what you want to do and that will work too. They did it anyway, in this amazing way. This double disc, super experimental album went diamond. But in terms of just being a cool dude, I just want to be Will Smith.

That's an amazing answer. He's so corny, but no one can touch him. Like think about it, "Switch"?

No one questions him! He can be his corny self. I'm basic as hell so I love it.

Wait, on a scale of one to...wearing Supreme or drinking fresh-pressed juice, how Cali basic are you?

See I'm not even that Cali hypebeast. Like you wouldn't look at my closet and just see 'Preme. I fuck with Urban Outfitters, that's how basic I am.

I'm deadass serious, I've copped some awesome things from there. I go to Urban Outfitters and ball.

Have you bought yourself a suede tassel vest for Coachella?

Oh see, I don't do the whole "hippy-for-Coachella" – I go to Coachella dressed like myself. I definitely am like, "This shirt would be good for Coachella vibes," though. I'm not trying to make sure I look like this 70s dude in a band. You're not going to catch me with a tie-dye tee and bandana.

Would you ever straight DM Will Smith like "I want to work with you."

I DM sometimes, but I'm just so bad at it. I'm so bad at networking on the Internet. I can network in person like a normal dude, but when I'm DMing on Twitter to try and get something it's like, this is obviously a business thing. I can sometimes do like a "wassup dog, I fuck with you", but very rarely.

Then how do you deal with DMing girls?

Hey, but aren't you all about capitalizing on the Internet?

I know how to spam the shit out of people on the Internet for sure, but when it comes to like...if a girl hits me up online and she's so down I'm like, "I don't know what to say to you right now." I would be like "Hi!", like some normal conversation shit, but normal conversation shit doesn't work on the Internet. You need some emojis. You got to know the coolest lingo.

Your and Yachty's relationship was Internet-derived though, right? Weren't people asking the two of you to have a dance battle?

They were! He posted this video of him and Perry like doing some awesome choreography together and then they were like "ain't nobody trying to battle us" and the Internet was like, "Hell nah! Y'all don't want to see Kyle and Brick," because me and my DJ, Brick, do a bunch of stuff too. We were like calling venues, about to set up a whole "You Got Served"-ass dance battle thing. I was going to buy some Adidas sweats and like get a shoulder tattoo, I was going to do the whole thing. It was going to be a dance-off. Then luckily, it didn't work out. It would've been a crime scene.

Then you just became friends off of that?

Yeah! Then we just became friends on Twitter! But it takes something, to start the conversation. I can't just be like, "What up though?".

You need to put out choreography to "Switch." It just has to be done. It's an objective banger.

Wow, to that song, it would be amazing. That's the shit. Think about it, who's cooler than Will Smith?