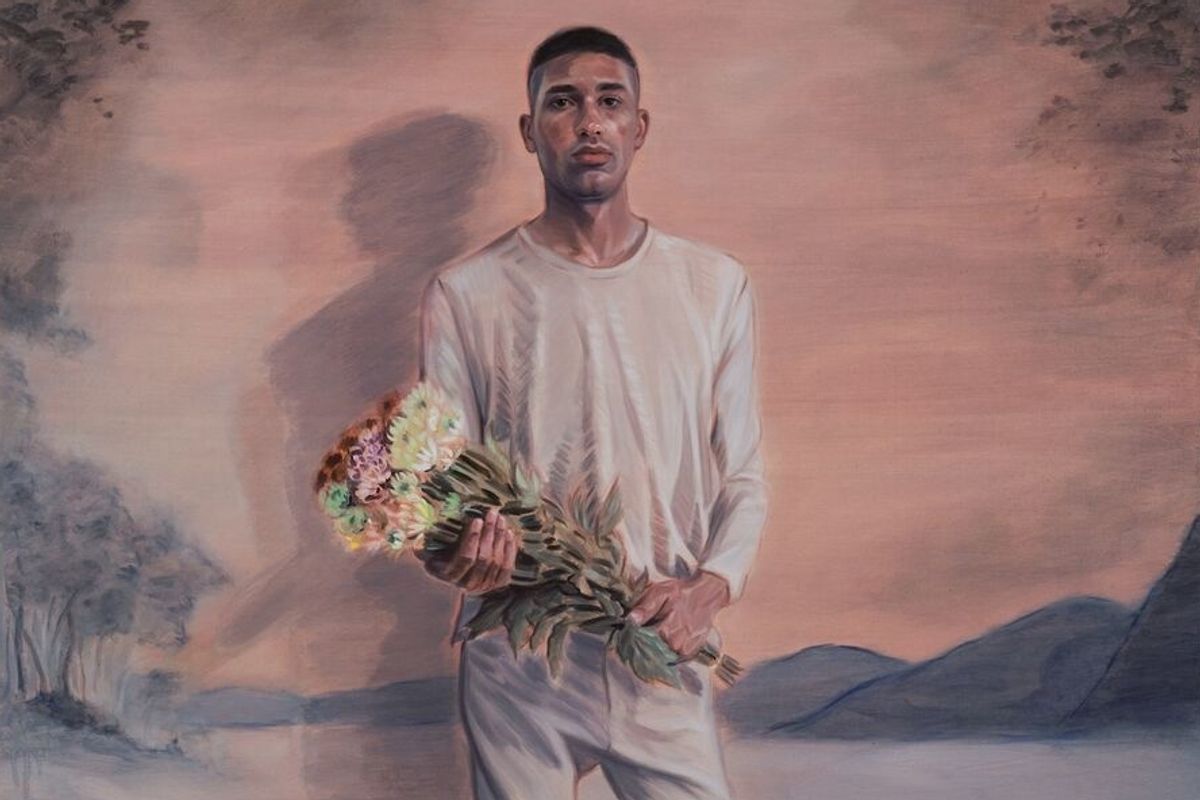 In the dynamic between subject and artist, we expect it's the person being painted, photographed, or rendered in some other medium who might be timid or nervous, and the person capturing them is confidently in control. For Toronto-based painter Kris Knight, however, it's quite the opposite: His self-proclaimed shyness often slows the necessary process of cultivating trust between subject and artist.

Maybe it's Knight's patience that imbues his work with such tenderness. The pastel tones of his portraits are soft and gentle, and the positioning of subjects feels intimate, like they were caught off guard without ever having realized it. Combining inspiration from 18th and 19th century styles — the theatricality of rococo, the more cerebral neoclassicism, and imaginative romanticism — recalls a period when portraiture was largely reserved for the rich and powerful.

Knight's subjects are "some of the most confident people," he notes, but the ultimate results often stray from a straightforward likeness. In the end, the subjects read as everyday people, mostly young men — but with their inherent loveliness foregrounded (even in introspective or more melancholy portraits), he elevates the quotidian to divine heights.

After falling for Knight's beautiful portrait of Troye Sivan included our new PAPER People Issue, we decided he deserved a showcase all his own. Below, learn more about how Knight's personality intersects with his process, his past collaboration with Gucci, his work ethic, and more. You'll get a bit of an art history lesson in the process, too.

Can you tell us more about your inspirations and how your style developed?

Like many young artists I was drawn to historical art and artists as a way to learn technique — especially the portrait greats, but as I got older I started to dissect what I liked from each artist and applied bits and pieces to my process. I really don't know how I ended up with my style other than observing and realizing what I like and don't like about painting over the years. I know that I like quiet paintings; I like having the audience lean in, as opposed to yelling at them.

Your work reminds me of Chuck Oberstein's sad clowns at times, like with "Harlequin" and "The Unsuccessful Joke." I mean this as a compliment, of course. Is it completely off to see — in a way — your work as a romantic, soft, and queer update of those portraits?

I have to admit that I am not a fan of Oberstein's clowns; I much prefer the Féte galante paintings of the rococo period to anything circus-like. Oberstein believed that clowns represented freedom, which I agree with, but the costumed and masked performers of Féte galante represented a search for intimacy and personal pleasure suffused with a theatrical air. I'm also a bit of a Watteau stan, to the point of celebrating my 37th birthday at the place of his death in France at the age of 37 but you didn't ask me about ghost-hunting.

I often paint the character of the Harlequin because he is the comedian whose job it is to entertain and make us laugh — the buffoon who can get away with throwing thinly veiled truths about the powerful and the audience itself because we are too afraid to. The harlequin has been a metaphor for artists for so long — from Romanticism to Picasso, artists often link their own ambivalent role in society to that of a clown — for me, I can position this ambivalence to my own queerness.

For that series, I was more interested in the role of the performer and exploring notions of performance in both and everyday and theatrical dimension, whether it is real or faked. It's the performance that gets one from A to B, especially in a culture like today's where we yell out successes on social media but hide our failures with all might. It's the balancing act of presentation — we rarely show our backstage because it makes us uncomfortable and [it's] uncomfortable for our audience. I often use theatre as a way to examine what's actuality from what is merely staged and what happens when these lines are blurred.

I've always been a quiet and shy person who prefers to look rather than be seen, so I am envious of those who can get up on stage and command an audience. Many of my paintings focus on the performer without an audience or the failed performer — and how they act when they don't have a spotlight to shine in. My work celebrates this underlying sense of tension and sadness and the desire to be distracted or to distract, but with bits of humor and sensuality, because who wants to be a complete downer?

"I like having the audience lean in, as opposed to yelling at them."

How do you choose your subjects? I've read that some are your friends, but sometimes you'll paint someone you think is your own creation, only to later realize you've encountered them a handful of times in your daily life. What do you think draws you to particular faces and bodies?

Over the years I have managed to convince a small group of friends to pose for me for every series; their likeness may change in each painting because I am too lazy to seek out new subjects, but also because it's taken me years to achieve a level of comfort and trust with these subjects. When I invite new friends to come pose for me in the studio, the first session of photos and sketches are usually a toss away because of my own awkwardness. I often project this nervousness onto my sitter; it takes some time before we are both relaxed and the positioning isn't so static, sometimes it doesn't happen and my paintings have a nervous tension to them that we simply couldn't overcome.

My subjects are often the most confident people I know or have been told of — handsome, talented and confident. When I photograph them for my work I usually use the still right after I say that "we got the picture" — this is when guards are let down and minds wander. It's the slip or comedown from an accomplished feat or a praised task.

When I don't use live models I make collages — often from historic photos of figures whose biographies I resonate with (often queer men with a tragic past) and embellish the rest, the costumes, the settings into something that helps stage my narratives.

You've said that your earliest memory is of drawing, and that to an extent, you were "groomed to be an artist."

Yes, one of my first childhood memories was that of parent's excitement when they discovered that I had some drawing skills at very young age. I remember the pride in their voices and I had a desire to keep drawing from that point on. Some kids are into sports, or horses or action figures; I was into drawing and painting, so most of my birthday and Christmas presents were art related. In a way I was groomed to be an artist simply because it was easy gift giving. I do exactly that same thing now with my nieces and nephews.

Another reason why I've always been interested in art is because I am shy, quiet person, who as a kid, would much rather draw on the floor than go out and play with others. Like many gay kids who grow up in rural areas and small towns, I wanted to flee as quick as I could, so going to art school (aka next level misfit high school) in the city seemed like the logical choice. Fashion school was going to be my plan B if I didn't get into art school because I've always been a magpie for color, textiles and patterns.

What was it like to work with Frida Giannini on the Gucci pattern?

Working with Gucci was a dream. When they approached me to reimagine their iconic Flora print I was very much overwhelmed but wanted to create something that was narrative and still very much about my practice.

I was given a lot a research materials on the Vittorio Accornero's original Flora design that Gucci created for Princess Grace in the 1965, as well as access to the mood boards that Frida Giannini and her design team use to brainstorm their 2015 collections. In one of the mood boards, I saw a beautiful picture of a young Marianne Faithfull from the 1960s and her "Witches Song" started playing in my head — this sparked my initial ideas for my Flora print. I spent a lot of time writing the story behind my Flora print before I started sketching it onto canvas. I didn't want to create just a pretty floral print but something that had an element of enchantment, subversion and a touch of darkness.

I wanted to create a story that takes place when the sun comes down by choosing plants that one doesn't typically see in floral paintings — especially floral prints. I wanted to create a subversive floral painting that had a strong feminist twist by using plants and flowers that women of ancient times used to command power over men — whether it was for healing, seduction or poisoning. I've always rooted for the underdog and the heroine, and chose to dedicate my floral print to plants that have significant historical importance but rarely get celebrated in the daylight.

It's been a few years now since my print came out and I've watched it adapted countlessly and trickle from high end to fast fashion, but I still get a thrill and chuckle when I see people wearing my ultimately witchy and druggy flora pattern.

You seem to stay incredibly busy; you're constantly showing in solo and group exhibits. Your fountain of inspiration really seems like an bottomless reserve — but the intensity of creativity must ebb and flow at times, right? Can you give any insight into your work ethic?

I'm a bit of workaholic and I am extremely lucky to be able to paint full time, so I do treat it like a job. Sometimes that job takes over and engulfs me completely, but I am learning to have a life outside of my studio. Art is my currency and I still love and am curious of everything about painting (except the toxic side effects from prolonged exposure!) and still get excited every morning to go to my studio, but I do realize that creative burnout is a real thing, so I am slowly coming out of my studio hermit shell and experiencing life beyond painting.

Are there any upcoming exhibits or projects you'd like to mention?

Right now I am working towards my next solo exhibition that will be mounted in March 2019 at Galerie Alain Gutharc in Paris. It will be my second solo exhibition in Paris and I'll be showing a brand new series of paintings that shifts direction from the theatrical to the domestic.