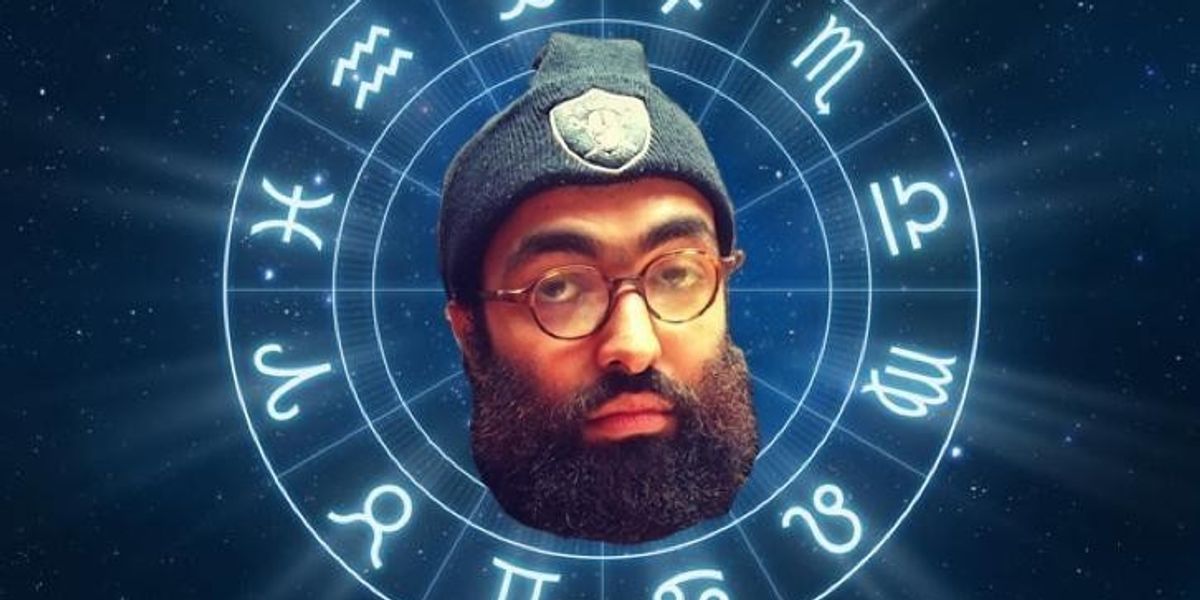 Happy Born Born turn up. Listen to that new KOOL A.D. album and watch the new video too. Also cop that other KOOL A.D. project that's dropping later this month. Vote for Hillary if ur in a swing state and Jill Stein if ur not. Vote to legalize weed and abolish the death penalty if u live in Cali. American Democracy is a joke and a farce, but enjoy the symbolic ritual of voting. Beat up a clown. Whup Batman's ass. Make love 2 a Gemini.

Pet a goat. Buy a chihuahua. Do a series of minimal abstract paintings in the style of Sol Lewitt. Buy a six shooter and shoot some cans off a fence in a country locale. Mount a deer head on ur wall. Snuggle up on a bearskin rug naked with a Capricorn next to a roaring fire with a cup of cocoa. Ride on the back of a Capricorn's motorcycle. It's a big grape month for Libra, eat grapes. Buy a pair of pink or yellow hi-top Chuck Taylors.

Read Zen and the Art of Motorcycle Maintenance. Read Hell's Angels: The Strange and Terrible Saga of the Outlaw Motorcycle Gangs by Hunter Thompson. Read Che Guevara's Motorcycle Diaries. Buy a motorcycle. Eat a weed cookie and do a wheelie down the entire length of San Pablo Avenue at midnight on the night of the full moon. Listen to Bob Dylan: Desire.

U still have echoes of the Aries supermoon in ur frontal cerebral cortex aura, which is a good thing, explode ur third eye chakra on the beach of ur soul ocean. Abandon linguistic logic. Surf the wave of joy welling up inside of u. Perforate ur heart with ur mind dagger so's it can breathe the sun's hot love energy. There's a lot of hot sun love energy popping off in November for Geminis, don't axe me why, the visions come thru me not from me, furl.

Make and sell 100 necklaces this month. Drink 300 glasses of distilled, non-fluoridated water. Make a Taurus buy u dinner. Go on a 3 hour bike ride. 22 minutes of meditation per day. Write a novel from beginning to end without stopping to edit. Edit it next month. Delegate more at work, trust others to do tasks that u typically prefer to do urself. Take a week staycation at the crib. Watch Moonlight. Read The Underground Railroad by Colson Whitehead. Listen to that Solange album some more. Revisit Untitled Unmastered.

Kick it with an Aquarius and soak up some game. Let ur sister cut her hair but tell her to keep it afrocentric. Read some Haruki Murakami and some Roberto Bolaño. Cop that new Leonard Cohen and also listen to some old Leonard Cohen. Do a ollie. Tell a dirty joke. Front me a pound of Bubba Kush.

Watch Amadeus again, that movie is crazy. Write a novel this month, it's National Novel Writing Month. Compare notes with an Aries. Hang out on a sailboat if possible. Bet on a horserace, pick the horse with the most beautiful name. Play some internet poker. Big Fela Kuti & Future month. Read some Chinua Achebe.

Heaven is in the soul. Calibrate ur personal swagulations to align with the heavenly planes arranged within ur mental matrix. Paint an illegal mural. Hire a day laborer to paint an abstract painting for $500 then donate that painting to a children's hospital. Drink an Irish coffee on the full moon. Allahu Akbar, am I rite? Only watch nature shows this month, no human narrative television. Love is everything, Love is all around u. Do a ollie. Front me a pound of Blue Dream.

Smelt some solid gold brass knuckles and punch a cop with them. Design a modernist minimal two-story beach house using primarily cement and large panes of glass. Learn a Rachmaninov song on piano. Take up archery. Shoplift $1,000 worth of art supplies. Put together an art show made explicitly from Crying Jordan memes.

Play the Lotto. Win the Lotto. Buy a house in Mexico. Give a Scorpio $10,000. Give an Aries $20,000. Smoke some hash, read the Bhagavad Gita. Listen to some Lubomyr Melnyk. Read some Nikki Giovanni. Like Sagittarius, u should cop that new Leonard Cohen.

A good way to make some money without doing much is to stay in like a 50 dollar a nite motel while Airbnbing ur apartment for 75 bucks a nite or more. If u do that for the whole month u can make like $750. If u do that for a year that's like 9k, enough to get another apartment (or two even) and Airbnb that (those).

Try cutting ur carb and sugar intake in half, maybe cut it down to 25%. Ride a bike instead of driving to work. Cut down on alcohol and cigarettes. Drink 300 glasses of distilled, non-fluoridated water this month. Buy dinner for an Aries. Buy some Lotto scratchers. Read Cracking the Cube: Going Slow to Go Fast and Other Unexpected Turns in the World of Competitive Rubik's Cube Solving by Ian Scheffler and then solve a Rubik's Cube.