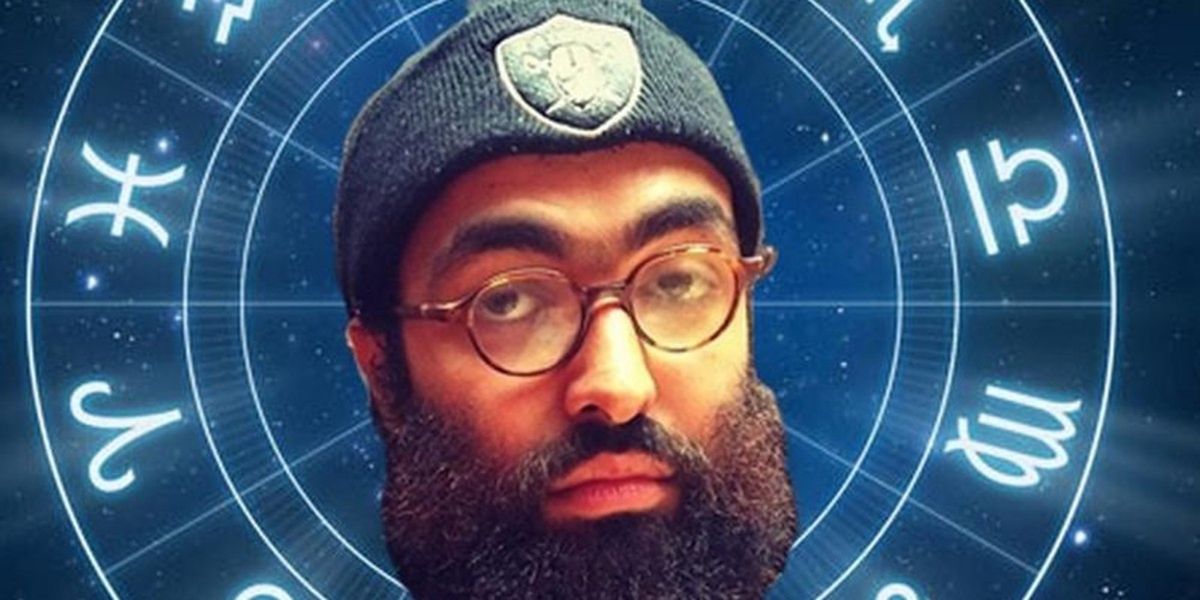 Happy Born Born, turn up! But also take some chill at home time. A lil rainy day type shit, u know, with a cuppa tea or whatever. Watch a couple British sitcoms -- Peep Show, Phone Shop, Black Books, etc. Reread some Sherlock Holmes. Read Brothers Karamazov. All writing contains both fictive and non-fictive natures. All writing is magical realism. English language, mane, what a drag, what a bummer. Why we all still speaking it? Feel like African linguistics been putting in some work tho counter-colonizing L'Anglais, but there's more work 2 b dun. Read some Zora Neale Hurston, some Jamaica Kincaid, Edwidge Danticat. Learn Swahili. Learn Yoruba. Do they got those on Rosetta Stone? Bruh, it's time we all agree, heiroglyphics is the waviest written language hands down. Very trill language. Super hyphy and wild. Very beautiful language. Pictorial. Learn heiroglyphics.

Terms for this month: Sun Ship. Star Wars. Kiss of the Spiderwoman. Charlie Chaplin. The Flat Earth Society. The Annunaki of Nibiru. Confabulation. The Mandela Effect. Existence as Perpetual Hypnosis.

Love is Life & Life is Love.

At 8 am on the morning of the full moon have a warm, morning chi drink on ur way to wherever u may be headed! This warm, morning chi drink (if ur making it rite) should contain more than 25 grams of plant protein, thanks to vanilla mushroom protein and stone ground almond butter. And also have the super endocrine, brain, immunity, and libido- boosting powers of Brain Dust, cordyceps, reishi mushroom, maca, and Shilajit resin. Throw he shou wu and pearl in as part of ur beauty regime. Chase it with three quinton shots for mineralization and two lipospheric vitamin B-complex packets for energy, and u got urself a recipe for major lunar shift, my G.

KILL! KILL FOR UR DADDY! Naw jk, but isn't that some crazy, freak shit I could be saying in these horoscopes? U ever see that movie, Faster, Pussy Cat! Kill! Kill!?That movie go hard. Kick back with a coca-cola and a bowl of popcorn and watch that lil muhfucker right there. Stay hydrated, eat some vitamins. Vitamin C is crucial. Read Andy Warhol's autobiography with ur left eye while reading the Q'ran with ur right -- it will improve ur vision. Listen to Sister Rosetta Tharpe, drink some orange juice. Wear sunglasses for the majority of this month.

Spend time with other Water Signs in this approaching Pisces season. Go all out on a b-day gift for a Pisces. Consider telepathy as the final form of the internet. Consider teleportation as the ultimate solution for space travel -- matching the speed of light, the speed of perception and transcending spacetime. Science is a spiritual pursuit, mane. A lot of people don't have the gut for it. Consider robots, man. What a trip. Human consciousness transferred into a moving statue. Imagine a robot made entirely of water. Get Terry Tao to design it. Bruh, the flesh realm is wearisome. Wake me up when we're all a single, untethered consciousness writhing endlessly thru the cosmos. Oh, we already are? Tight.

The daily grind can cause u to lose sight of the eternal cosmic truths beyond this pedestrian reality. The day shouldn't grind so much as billow. The daily billow... Sounds way better, don't it? Work to make the day billow. That is a careful, calm, intentional labor -- free of ache. Free urself of actions that cause ache and weariness. "Live every day to the fullest" is a very corny thing to say, but a not a corny thing to do at all. And sometimes "the fullest" actually means lying in bed all day -- ask ur boy John Lennon and his groovy wife Yoko Ono. Look man, Love is a Dream and The Dream is Real. Do what u Love, and Love how u Feel.

KILL! KILL FOR PAPA! Naw jk my fault, hoo, damn I'm a fool. Anyway peep game: MATHEMATICAL LINGUISTICS is the study of mathematical structures and methods that are of importance to linguistics. As in other branches of applied mathematics, the influence of the empirical subject matter is somewhat indirect -- theorems often prove more useful for their inherent mathematical value than for their applicability. Nevertheless, the internal organization of linguistics remains the best guide for understanding the internal subdivisions of mathematical linguistics, and the field can be surveyed following the traditional division of linguistics into → Phonetics→ Phonology→ Morphology→ Syntax→ Semantics. Then on top of that, there's hella other branches of linguistics and all their lil mathematical methods as well, including but not limited to Sociolinguistics or → Language Acquisition -- but only to the extent that these have developed their own mathematical methods. Smurl meh? In addition to all of that u have pidgins, creoles, other syncretic, hybrid glossia/linguistic ideologia, and then think about that as applied to artificial intelligence in computers, robots, the internet, etc. Bruh, it's a wild topography. How do we discern which words are relevant and important, what information is relevant and important, and to whom? That's on u.

Time travel is real. The collectively agreed upon conception of linear time is just an agreed upon locator -- one of any infinite ways of conceiving of time. Time operates outside of itself. It's a subjective, splintered collective consciousness -- chaotic, amorphous, quantum in nature. The physical nature of the world (mass in space and their interaction with time) is filled with mostly nothing. Spacetime is mostly nothing. Everything is mostly nothing. Or rather, everything is that tiny sliver of that which is not nothing. But actually tho, everything is basically nothing. George L. Jackson wrote from prison: "We are not defeated. Pure fascism, absolute totalitarianism, is not possible. Hierarchy has had six thousand years of trial. It will never succeed for long in any form." That's woke AF. George L Jackson is trill for that. Very wavy stuff. Yeah baby, groovy. Feel me?

Mexican Thai ice tea: tequila and fresh jugo de zana'oria. Swag swag swag is the new black. what y'all think about that show Orange is the New Black? Is it tight? Ay, matter o fact, fuck anybody. Fuck it, "I'm on One" was maybe the only good Drake song. Mexico is the land of mystery, y'all. It's tight -- slide thru. Look I'ma tell u like how i told Scorpio -- PURE FASCISM, ABSOLUTE TOTALITARIANISM, IS NOT POSSIBLE.

Listen to 50 Cent: Get Rich Or Die Trying. Read George L. Jackson's Blood in My Eye. Buy urself a bong, get high, watch Adventure Time. Buy a Fendi purse for that special somebody in ur life. That special somebody could even be u. One day capitalism will fall and all Fendi purses will be free. Until then, sell drugs.

Meditate on the concept of the mask. Laugh at the illusory nature of death. Feed a communion wafer to a seagull. Listen to that new Rihanna -- it sounds better a month later, after any hype. Listen to the new Project Pat. Ur keywords this month are "Truth" and "Beauty". Throw out some old clothes. Drink more water, less juice and soda. Watch Star Wars again. Dark rum and white candles on the full moon.