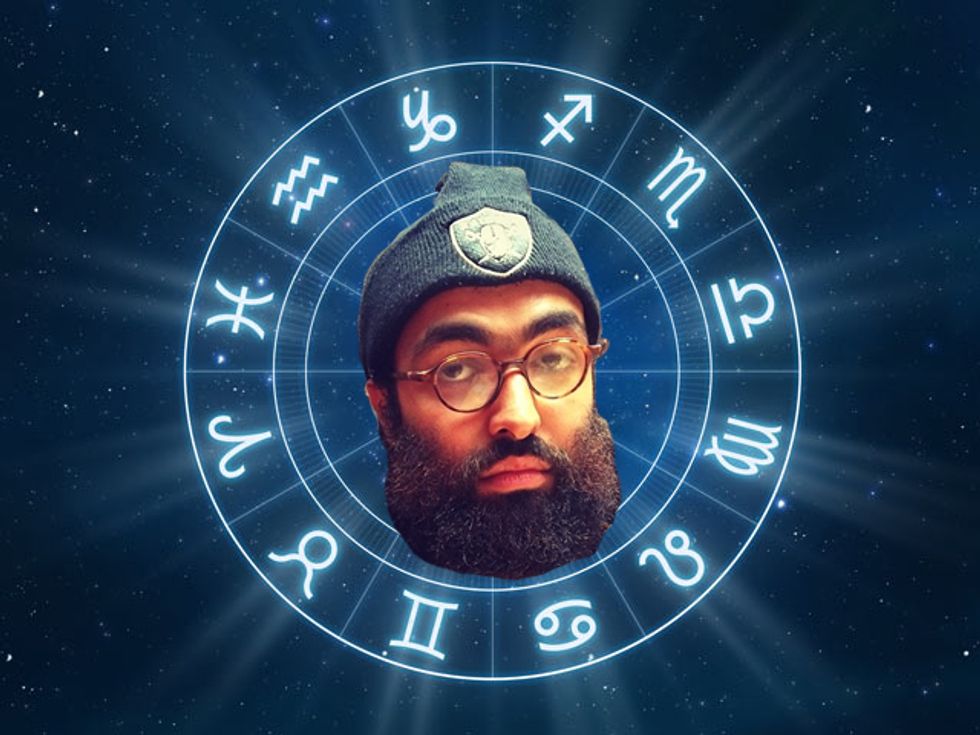 U have settled into a new rhythm. Things will continue at this pace and rhythm for a while. Listen to Future: Finessin. Stay hydrated. Avocado is an important food for u this month. Try telling a joke to somebody this month and I bet u they will laugh at it. Make some much needed alone time for urself.

Do sit ups and push ups every day. Eat less sugar, fat, carbohydrates and dairy, more protein, fiber, roughage. Drink a lot of water. Run, swim. Drink less beer. Wine, liquor and weed are fine. Pills and powders in moderation. Psychedelics are fine, encouraged even. Delete all the games off ur phone and read a book or two. Go see a movie by urself. Visit a church, a casino, a graveyard, or all three. Talk to at least one stranger. Perfume urself with jasmine or sandalwood oil.

U Might have a threesome this month so keep ur eyes and ears open. Be gentle, patient and honest. Don't try to force ur ego upon any social situation u find urself in. Drink coconut water at some point this month. Buy a bouquet of flowers for urself. Shoplift something from a Walgreens, Walmart, K-Mart, Target, Long's, Duane Reade or 7-11. Preferably Walmart tho. Buy a scratch-off lottery ticket. Spray paint a yin-yang symbol on a cop car. Get kicked out of a bar if that's how u feel. Get into a fight with a stranger if that's how u feel. Get arrested if need be. Fear nothing.

When it comes to "revolution" as an idea/ideology/politic, two questions that spring to mind are:

2. What the fuck else would you be doing in your spare time?

Those who call communism, socialism, anarchism and other "revolutionary" ideologies fatally idealistic or hopelessly romantic could perhaps consider the fatal idealism and hopeless romanticism of capitalism, "the republic," democracy, plutocracy, and pretty much all human ideology, period. The "revolutionary" or "communist" or "socialist" or "anarchistic" ideas are all gestural cosmic splinters of a larger, extra-linguistic idea. Words are important and useful but u should take some time, maybe 30 minutes to an hour per day, to sit in silent meditation. U had a lot of sex last year, pick the sexual partner u liked best and go deep with them emotionally.

Watch that documentary on Ai Wei Wei that's on Netflix then go to an art museum with a Cancer. If you can't find a Cancer, then a Taurus, Aquarius, Gemini or Scorpio will do. If you didn't trip on a psychedelic drug last month like u were supposed to, then do it this month with a Cancer, if possible. A Taurus, a Gemini, a Scorpio or an Aquarius would also work. I highly recommend tripping on acid in an art museum if you've never done it. Keep a glass of water in the corner of ur room that is closest to the direction of the Hejaz region of Saudi Arabia. Try to empty and refill it everyday, but if u miss a few days here and there it's no big deal. Mail a postcard to somebody u haven't talked to in a while.

Maybe we can smash the myth of genius with the rising of Mars in the house of Venus. You could stop me if you've seen this. Not even in our wildest sleep could we dream this. A field of light. A field of anything you'd like. From foot to brow, this is clearly what we're doing now.

Better than the feeling of anger is a sense of and a will to justice. Better than sadness is meditation. Better than fear is love. Better than war is peace. These are linguistic statements that can be deconstructed to mean essentially nothing, but the spirit behind them is a nameless, wordless hope. Go to a church or a casino this month. Eat mostly Chinese food if you can. Go to an art museum with an Aries, preferably while tripping on a psychedelic drug.

When you boil it down to simple semantics, the word "revolution," and its etymological meaning/weight/history within English and the larger gradient of human language in inter-translation, seems more human or more natural (or more friendly to the ideas of "human" and "natural") than that of say "hegemony", or even the much simpler "rule." The idea of the "commune" or the "society" seems more natural/human than the idea of "capital." But when you boil it down even further to the point at which semantics themselves dissolve, you're left with mere gibberish. Words/language are a type of action, yes, physical, yes, (they are symbolic objects can be heard and seen and even literally held) but like all other physical things there is a metaphysical property to them (or beyond them, if you will). What do u want to do with ur life? Do that.

Everything that is true for a Capricorn this month is more or less true for u too. Above all else, the main theme of this month is FEAR NOTHING. There is literally nothing to fear but fear itself. Look up Jim Carey motivational speeches on Youtube.
You May Also Like
Famous People