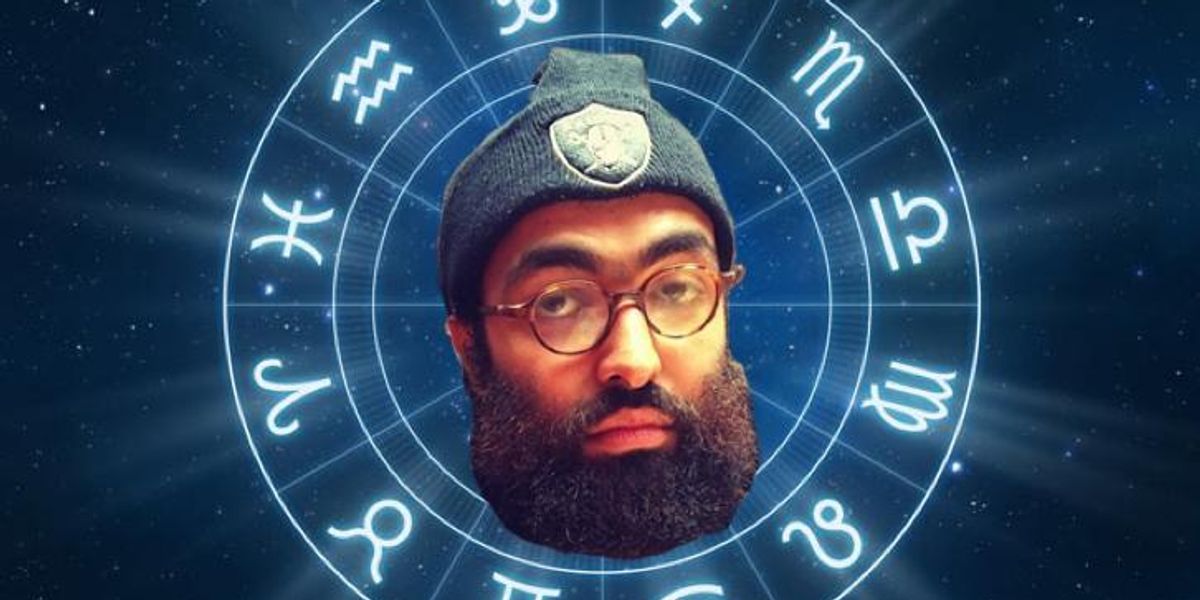 Don't take no for an answer. Intuit your way into a newer reality. It's a moon and ocean time. Every month is, tho. The American government chose Aries season to extract money from its populace because ultimately Aries are the most forgiving sign and people need a shit ton of forgiveness to give money to the American government. As an Aries I feel like its your patriotic duty to step outside your natural forgiving state and abandon your forgiveness and consciousness as much as possible this month. Don't pay taxes, take revenge on the government. I think I told you to put a pizza slice under the windshield wiper of a cop car like a parking ticket before right? Thats hella funny, do that one again, it never gets old.

Hop up out of bed, turn ur swag on, take a look in the mirror, say what's up. Yeah, u gettin money. Get a pitbull name it Bruce Bruce. Take Bruce Bruce on a walk. When you come across a skinny bitch, let Bruce Bruce hit it. His shot will be true. Now Bruce Bruce is a father, which makes you a grandparent. That's what we in the astrology game call "getting grandfathered in."

The globe has its own process and u are part of it. Also the globe is part of u. What is free will? What is will, even? Dream logic is composed of waking logic and vice versa. Fossil fuels are a collectively imagined myth that can disappear. The most expensive gas at the gas station, that supreme one or premium or whatever they call it? The fancy one, the high class one? That's just water. I'm serious, taste it next time you filling up the Beemer. Meditate on plant, animal and vegetable consciousness. Consider the octopus. Consider human technology as biological. Consider consciousness as a swaggy gift from the other aspects of your own damn self.

Learn how to smelt together a lil 24 inch, 24 karat Cuban link yellow gold chain. Wear that with white t-shirts for weddings and black t-shirts for funerals. Optional: yellow gold roly. This is what is known as the Millenial tuxedo.

Go to a rave, candy-flip, listen to some EDM. Stay hydrated. Listen to Ai Wei Wei's metal album. Did I suggest that already? Do it again. Go vegan for the month. If you're already vegan, try some meat. Read the Pisces horoscope, that all applies to u too. Buy a beer for a close Cancer.

Do your thing, stay up, don't trip, bless up, bless up, bless up. Don't trip off nothing, really. Watch some curry highlight reels. Pick a flower and sniff dat lil bish -- don't it smell so good? Upcoming merc retro finna be a whomper, batton down the hatches as they say mane, board up some windows. After that, turn up.

This month is wild floral for u. Notes of lemon. Think zesty. You're in the beginning of a long and fruitful blossom my g. It's a moveable feast. The belly of the beast is wild foul but there's sad beauties to be the found in the folds of every reality. It's a new time, a new season, things can and will only get better. Transcend the circus of the politic and aim for pure unbridled joy and peace. Claim your own power, lovingly craft your own reality.

I actually think it's possible to abandon violent consciousness and it has little to do with language, contrary to what u might be thinking. Convert all guns into t-shirt guns, shoot free t-shirts into the crowd, imagine wearable guns. Imagine war is just hella fools wearing hella different t-shirts styling on each other. War is a sick sad theater. Fuck outta here with that am I rite? T-shirts is the new war, it's way more peaceful and comfortable. Destroy war mane we need to declare war on war itself. War on war is the last war, that's like world war infinity. But we all know peace is the real infinity.

Buy or steal a lighter from a 7/11. Acquire some dice but don't shoot them 'til next month. Cop a scratcher. 12 is a lucky number for u this month. Big mf doom month, revisit the oeuvre. Eat some ice cream.

Get stoned and play video games. Drink a glass of white wine. Read Africa: A Short History by Robert O. Collins. Do 100 push-ups. Go fishing. Catch a trout, cook it with just lemon, olive oil, salt and pepper, eat that bitch up. It pairs well with white wine. Po' urself another glass of that swag juice. Burn some incense. Go on a long drive and a long walk. Call up an Aquarius, say 'what up.' Keep doing your thing.

Fire ur boss. Ur the boss now. But u already knew that. Next order of business is how we finna get this money? But that's not important. Abandon money consciousness and u will never have money problems. All money will disappear soon enough, the concept will evaporate. The most primary labor is happiness. Give some flowers to ur sensual partner. Fast until sundown on the full moon. Eat mostly fruit this month. Take a lot of long walks, stay hydrated. Replace coffee with tea for a bit.

There's 6,500 spoken languages on Earth today, but about 2,000 of those have like 1,000 speakers or less. The most popular language on earth is Mandarin Chinese, with a lil over a thousand million speakers, followed by English with 840 million or so speakers, followed by Spanish, then Arabic, then Hindi (4 or 5 hundred millions of speakers a piece) but let's just compare the top two for now. Very different languages from opposite sides of the globe and within cultures with ostensibly opposite economic models -- I think even opposite cartographical expressions of the cardinal directions but i mean bruh, it's wild, mandarin has 370,000 words derived from 23,000 characters. English, conversely, got lil over a million words but only 26 or so characters. Strange contrast. How many words you think there are on earth? Ima guess it's in the high billions, maybe close to the trillions. I heard Jhumpa Lahiri writes only in Italian now, that's trill. Ay read or reread Pale Fire that book is fuego, pun intended.