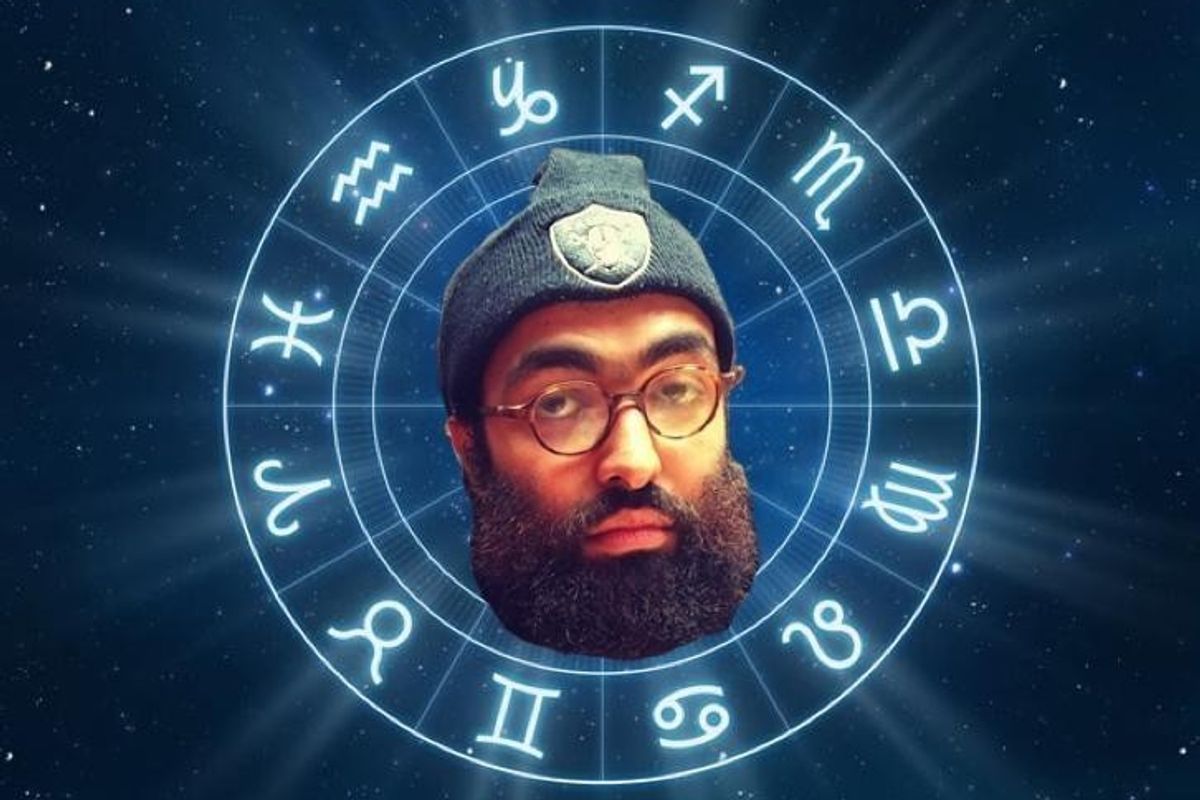 Ay so a few months back, I called the Presidency for Hillary Clinton, I figured since Hillary's a Scorpio and both the Sun and Mercury were in Scorpio on Election Day, a time where desires and ambitions are communicated intensely (for Scorpios especially), that she had it in the bag, but I forgot to also account for Election Day falling on the day Mars shifts from Capricorn (a deliberate, persistent energy) to Aquarius (a more chaotic sign) causing an erratic energy shift, that apparently was skrong enuf 2 tip the scales to ol' Fuckface von Clownstick. There's a shred of astrological hope tho. The Electoral College casts their ballots on the 19th as Mercury goes into Retrograde, which as u know, tends to fuck up well laid plans, so this second chaotic energy shift might could reverse the outcome. Write a letter to the electors HERE telling them how much of a mistake it is to let dude in the White House. But remember these are wild "patriotic" Republicans ur trying to convince and they already been getting death threats and shit so a gentle-yet-firm type approach might be best furl meh, peep game. U should also prob write to Congress, too. They have the power to stop this too, they just need one senator and one representative from any state to formally object to their states electoral votes, so there's that. But seeing how congress is majority GOP too, we're most likely still pretty much fucked. But at least it's a therapeutic way to pass the time. But who knows, maybe that Merc Retro will shake they asses up, too foggy for me to calculate at this juncture. Regardless turn up like its ya fuckin birthday, cuz it is, fuck anybody who think otherwise.

U know what, fuck that, ur the president. The idea of the president being anybody but u is ridiculous. So some other fool halfway across the country, who u never met in ur life and never will is like, ur boss? And he doesn't even pay u? Matter fact, u pay him? Fuck outta here with that bullshit, no way patna, sit all the way the fuck down, not wavy. Ur first day in office, kick up ur legs on the solid oak desk and think about what u fina do the next 4 years. What promises have u made leading up to now that got u to where u are? How are u going to fulfill those obligations? What's the plan? Don't overthink it, a good prez need a cool hand, easy does it, let the decisions come naturally from an organic politic within u. But maintain a critical editor's ear and eye for laziness, too. It's a fine line, we all walk that razor edged ying yang called life. Do a little dance, make a little love, get down tonite. Go on a press junket, a whirlwind tour of the constituency, glad handing, baby-kissin, whole nine, turn up the swag. Grind the 16 stair rail of life. Do the work, do the knowledge.

There is no president. Abandon President Consciousness. The word "anarchy" simply means "no kings," so like no hierarchy, so like basically equality, essentially peace. People have conflated anarchy with chaos when it's no such thing, they've twisted the anarchist image into some rich, white, suburban, Guy Fawkes mask wearing molotov cocktail lobbin' Occupy Bro when in actuality they come in every shape, size and hue with countless nuanced interpretations of the ideology. Anarchist is not a slur, anarchy is not a dirty word. Listen to that new Zion I. The Labyrinth. Smoke weed erryday etc. haha Listen to some old Gang of Four. Listen to L.A. Witch, Elis Regine, Shonen Knife. Take some naps, drink a lot of distilled, purified water, meditate for an hour a day, take some long walks in the woods like Hillary Clinton, haha. Read The Neverending Story, then watch the movie on mute while listening to Pink Floyd's Dark Side of the Moon. Write a kid's book. Literally do whatever.

Minority gun sales are up 400% of course. December is a big gun month for Aquarius. Take a three day backpacking trip through a mountainous region. Go deer hunting. Read The Terror Network by Claire Sterling. Read the Autobiography of Malcolm X. Read the Art of War by Sun Tzu. Read the Tao Te Ching by Lao Tse. Read Mahatma Gandhi's autobiography. Read Martin Luther King's autobiography. Read Blood in My Eye by George Jackson. Read Soledad Brother by George Jackson. Read Angela Davis's autobiography. Or whatever, do whatever. You owe a Scorpio 140 bucks but don't pay them back, that same Scorpio owes u a lot more from before.

Aries will weather this Mercury Retrograde the best out of all the signs, not saying it will be hella easy cause it never is but it's not going to be the shitshow for y'all that it will be for everybody else. Everybody will be losing they shit and you'll be the calm in the eye of the storm in comparison. People will be wilding out so much they might not even think to ask u for help, and that's fine, let them figure it out for themselves, just focus on the work u've been crackin away at the past few months, it will go a little slower but you'll be learning a lot. December 2016 is a cold one. 2016 has been total trash astrologically speaking but after the rain there's gota be a couple flowers, look out for those and smell the fuck out of them when u see them. Just keep setting the table, a swaggy supper soon approacheth. Spend some quality time with a Scorpio or two. Give a solid bear hug to a Libra. Watch an old movie you've seen hella times. Drink hella tea this month. Keep making comfort a priority. Self-care is revolutionary, ya tu sabe.

The Army Corps of Engineers has denied the Easement of the Dakota Access Pipeline, halting construction and ostensibly forcing a reroute of the pipeline. This is a victory for the Standing Rock Water Protectors but it doesn't assure that the pipeline will not be built. The camp is staying put for now. If ur not familiar with what's been going on at Standing Rock than u must have been living UNDER an actual Standing Rock past few months but to catch up anybody that ain't know, militarized police have been attacking various Native American tribes and other protestors with water cannons, rubber bullets, tear gas, flash grenades (even blowing one protestor's arm off) for objecting to the illegal installation of the Dakota Access Pipeline on treaty-protected lands, which would desecrate sacred burial grounds and poison sacred waters. What just happened, astrologically speaking, is the Army said they wouldn't help protect the Dakota Access LLC (which is basically the Bakken oil company and their partners) as they installed the pipeline. Without this protection, it seems likely that they'll reroute, but nothing's final still, and the Water Protectors are still kicking it there til the pipe is out of the ground. You can donate to The Standing Rock Medics and Healers Council HERE. You can donate to the legal defense of Water Protectors who were arrested during the protests and have trials coming up HERE and HERE. You can donate to the Red Warrior Camp HERE. And if you want to support native rapper/activist/water protector Prolific pay his legal fees (I understand they're hitting him with some extravagant charges for being a vocal leader in the movement). Stay vigilant, Pisces, keep doin ur thing.

Set aside 20 minutes a day to sit in silence with ur eyes closed, focused on breathing in and out slowly. That's called meditating and it's hella easy and genuinely life-changing in ways u can only understand when u do it. The stresses of this world are essentially illusory. Any problem presented to u in life can be solved thru meditation, calm deliberation, and a detached egoless compassion.

The nature of reality is flux. Luckily, Capricorns are natural surfers, Chaos Pilots of the Everlovin' Super Soul, so all u have to do is be u. Remove the roadblocks of ego and desire. Understand ur subjective truth and how it applies to the world at large. U are of this world and in this world and this world is u and u are it. Embrace the changes.

Love prismatic, the beautiful heartsongs pouring from the soul's magnanimous caverns, the glittering jewels of truth majestic, the raw power of peace in all its brilliant bioluminescence, the fire flame delicious, the licking heat of beauty, the self induced hypnosis of the meditating mind elaborate, please know and believe, trust and overstand, the flowers sway gently in their cosmic winds, the mountains thrust their nose up to the God ceilings, triumphant, all is one is you is peace baby, love.

Investing in green energy and technologies (wind, solar, water energies, water purification, etc.) and divesting from pollution heavy fossil fuel industries like coal and oil will not only help reverse some of the ecological disasters caused by the fossil fuel industries but also provide new jobs for the workers in those industries, as well as more new jobs in addition those, as well as decrease violence caused by economic competition in oil rich nations, which would allow for a decrease in military spending, which could than strengthen health, education, welfare programs which in turn wills decrease economic disparity, lowering crime, it's all one intricate thang. Strife begets strife and relief begets relief, reprogramming must occur across the board. Intersectionality is crucial to a cohesive global liberation movement. Keep warm, take naps, stay hydrated, self care, ya tu.