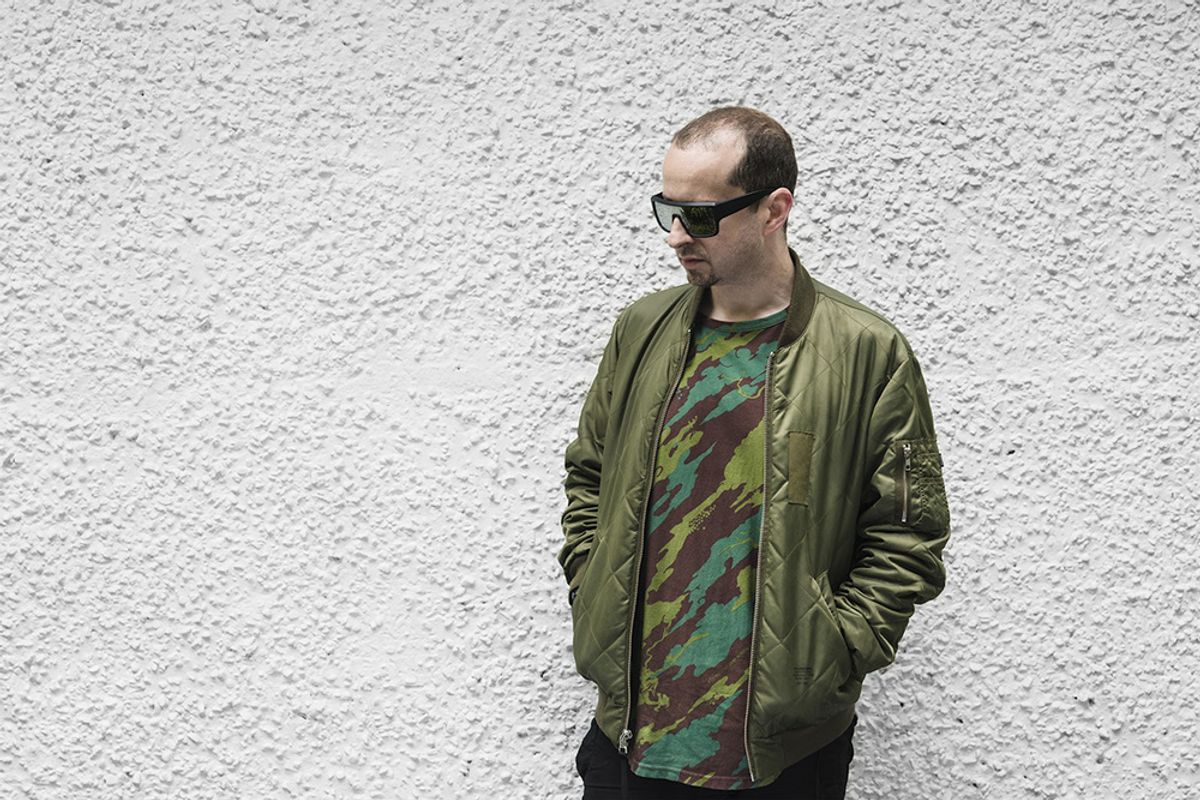 Hyperdub Don Kode9 Talks About "Nothing"

To most, Kode9 is the definitive don of UK underground dance music. As the founder of seminal dance label Hyperdub, which has put out everyone from Burial to The Bug, he's had the kind of impact on forward-thinking dance that very few have. 2014, however, was a tough year for Kode following the deaths of both friend and footwork legend DJ Rashad, as well as his longtime collaborator The Spaceape. It was a rocky patch that led him to spend the beginnings of 2015 locked away in a studio working on what would becoming the haunting Nothing.

A challenging listen to say the least, it's a record that's surprisingly emotive in its sparseness, one fueled by a painfully-deliberate dive deep into the depths of uncomfortable loss and reckoning. The future has never looked bleaker and, honestly, better off, than it does in Nothing. As such, we spoke to Kode ahead of the album's release this Friday about everything from the mathematics of zero to Tupac to Mortal Kombat -- and learned more about what went into what is, in our honest opinion, one of the best electronic albums of the year.

What struck me first about Nothing was the nihilism of everything.

But then I realized I made [these new] tracks without a concept or anything to finish the album. It kind of winds me up when artists get so stuck in a concept and say their album is about that, almost like it's been arbitrarily dumped on top of the music without any relation to it, but I always need a concept to finish an album.

I was asking myself, "What's this album about?" And I really didn't want to answer that question...and, even though that's like an empty concept, it really helped me finish it. It was like a key that unlocked the whole of the album. That enabled me to finish.

So the album started out of a literal "nothing"?

Zero is almost like a virus that the West doesn't want to let in, so as a number it didn't always exist. It was created in Babylonia and India, and Europe was totally hostile to the concept coming in because it completely undermined the Western way of thinking [based on concepts like] monotheism, Judeo-Christianity -- so there's something almost demonic about the number zero, and that's why zero didn't exist until the last 400, 500 years. But it came at the same time as capitalism, which sort of secularized the West and led to all of these innovations that led to modern science. So, it literally came from nothing and through the research for the album, I came to find that the concept of zero was actually quite complicated.

It's so hard to believe this if your first solo album.

Yeah, cause I'm so fucking old. This is a bit of a reset album for me. I'm going back to where I started with music -- making instrumental music. I wanted to make more of this album in the box. Digitally, with no synths. Just samples, so that probably affected it.

That resonates with me a lot. That's another "zero" reason. Most of this album happened in January. Never have I made an album so fast in my life. This was just like putting myself in solitary confinement from New Year's Eve last year, and not really coming out of the box until the beginning of February. I was shocked by that, I was like "The fuck happened there?" It was a lot of stuff from the last year that I couldn't put into words that all came out in sound.

There's a ton of influence from super in-your-face subgenres like footwork and Japanese horrorcore, yet Nothing is remarkable in the amount of space it has. How did you build these tracks? Would you say there was a process of subtraction or addition?

The songs came out of these tiny, little loops I was building -- chopping things up and building. I think there's a few tracks like "Motel" and "Void," that are all built around very repetitive, minimal aspects...you know, the 8-bar switches of grime, but the minimalist thing that footwork has, which are just things that loop forever and ever, to the point of irritation. I was building these threads of like repetitive stuff with like no beats, very hypnotic, put my in a trance kind of stuff...I was like, in solitary confinement, sensory deprivation.

Let's talk for a bit about [visual collaborator] Lawrence [Lek], can you explain to me exactly what the show is?

I'm going to be playing live, and there's going to be a large screen where Lawrence will be building a virtual environment, like a computer game type of environment, of a building that's called the "Notel," which is a fully-automated luxury hotel that's been evacuated. So there's no humans there.

But all the machines are intelligent. Like when you order room service, it's delivered by drones, and things like that. But again there is no human service there, so the question is...what happens to these machines after their masters have left? Because the relationship between humans and machines has always been a sort of master and slave -- where machines are enslaved to human will, what humans desire. So, we're not quite sure what's going to be in it. As I'm playing live, Lawrence is going to be navigating through the hotel. Maybe a different space, a different room, a different floor for every track [that's played].

But there are "human" holograms, right?

Yeah, I expect there to be holograms of Spaceape and Rashad. There's some kind of digital memory of humans present in the hotel, but as Lawrence described it, it's gonna be like a wildlife documentary of the machines in the hotel. Instead of focusing on like, tigers in the jungle, it's going to focus on what these intelligent machines do in the hotel after they're no longer enslaved to humans.

So you might have, for example, an automated Japanese toilet that suddenly starts coupling with a jukebox and a respirator -- so you've got these three machines that were made for something completely separate, interacting with each other, and we don't know what comes out of that.

The future of The Discovery Channel, huh?

Yeah, it's truly like watching the machines attain autonomy...Machines attaining freedom, whatever that means.

Cyberpunk was dealing with all these issues before anyone else was. In terms of literature, and architecture, and art, and music, [it handled] themes having to do with intelligent machines and not seeing the world purely from the point of view of humans. And the idea that the human is a blip on the long time scale of history. The idea that we won't necessarily be around forever.

There's another thread, which obviously comes from like Tupac holograms and [this idea of the] digital immortality of the musician. The weird thing about Rashad and Spaceape dying is that musicians make it easy for you to deal with their death because they leave you with all of their music, so they really do live on in your memory -- and the whole holographic rockstar thing is super interesting in that regard, because not only do musicians live on through their music and their recorded voice, but they can also have this digital immortality through digital holograms. Which is this really fucked up and trippy situation, but it's something that I think is going to become more and more important [to the industry].


I've personally always had a little bit of a problem with cyberpunk in terms of the way it tends to fetishize Asia, like a lot of works treat it as nothing more than a backdrop. Do any of these issues bother you as well?

There's certainly a lot of cliches, particularly about Japan in the future -- but my counter to that is Yellow Magic Orchestra in the 80s and the way they were sort of doing [the same thing with Western culture]. They were making those moves in the opposite direction, by fusing Kraftwork with traditional Japanese folk music. And like [having] one of their tracks named "Plastic Bamboo" just sums up this synthetic folk. Old and new together. So there's this trend of Orientalism in western literature and music and so on, but there's the reverse thing coming from Asian artists. Occidentalizing, which I think is kind of more interesting in a way.

And so when we did [ Future Brown member] Fatima al Qadiri's record a few years ago [Asiatisch], that was the first record I had heard in a while that tried to conceptualize this idea of cultures hijacking other people's cultures. The problem with Orientalism is that the theory is a very one-way theory. It's one-way in the sense that it is only the West appropriating the East, but things are never that simple. It's always like a two-way interchange going on. Obviously there's a power relation, but the album draws attention to that stuff.

Speaking of which, you flirted with sinogrime [a strand of grime music with Asiatic influences] a few years ago with a pretty well-regarded mini-mix.

In a postcolonial sense though, there is a lot of forced Western influence on Asian artists though...like as you said, there's a pretty blatant power dynamic at play, which is why a lot of Occidentalism happens.

I mean it's super interesting, but it's an ongoing thing because the power shift towards Asia is going to make this a more and more important issue. These little, tiny debates probably seem irrelevant to most people, about grime producers and sampling, copying, Asian music; Asian musicians copying western music; but I think it's quite prophetic of much broader debates that are going to be much more important throughout the next hundred years.
You May Also Like
Music