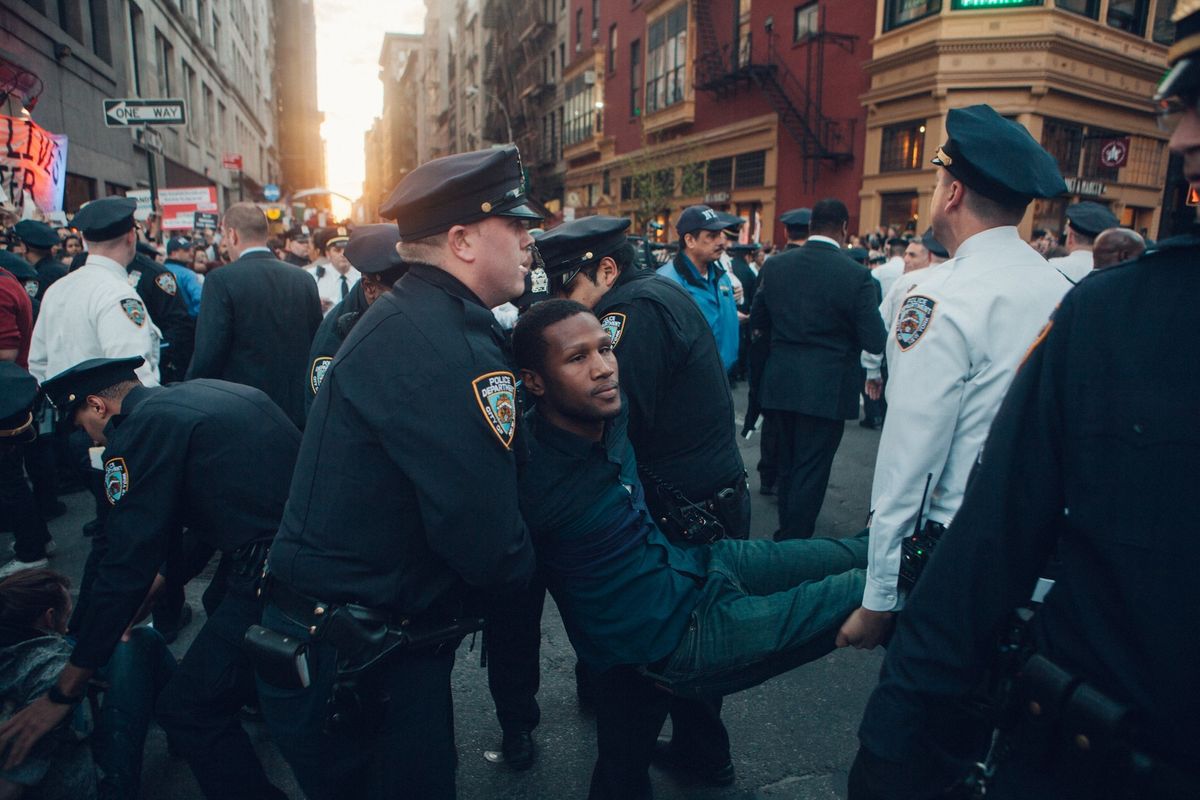 As we all know, strength comes in numbers, and following the events of this week, there will undoubtedly be many protests in cities across the US in the coming days. If you want to exercise your right to assemble and join one of these demonstrations against the use of excessive police force against black and brown bodies, there are a couple things to keep in mind. Following the shootings last night at Dallas's peaceful Black Lives Matter protest, security and scrutiny of protestor behavior will certainly be elevated. We had New York criminal defense lawyer and National Lawyers Guild member Ryan Blanch of The Blanch Law Firm outline a few basics tips to remember about "what you can do to express yourself, how to avoid being arrested and what to do if you're arrested anyway."

What are you allowed to do under the law as a protestor?

Each state has its own laws governing peaceable assembly, but the state cannot limit our inherent rights and freedoms afforded to us as United States citizens. This is because no state law or constitution can be used to narrow our rights as citizens under the U.S. Constitution -- a state may expand those rights, but it cannot take any away. It's important to understand what you can do under the law, but sometimes obeying the law just doesn't help. Oftentimes having the law actually on your side is only of assistance long after you've been arrested and prosecuted. So while it is good to be mindful of your rights, it is also wise to be strategic in how you conduct yourself during a protest if one of your goals is to avoid arrest.

You have the right to assemble in a public space. In most towns that means, parks, sidewalks, spaces in front of the court house—anywhere that the government has clearly made available for public use. You do not have the right to assemble in a private space. It's important to know the difference. Not every field is a park and that patch of concrete may be owned by the building. Don't forget the peaceable part of "peaceable assembly." There is a fine line between spirited protesters shouting their dissatisfaction and an angry mob. You can take photos and video. You can even video tape a police officer while he/she is questioning you. You can hand out literature. But states and cities have the right to insure the safety of their people and to regulate traffic, etc., so you do not have the right to march down the middle of the street blocking traffic. Some cities require a permit for certain activities. The permit requirement cannot be used to take away our First Amendment right to free speech and to peaceably assemble.

How can a protest be run so as to minimize the chances of arrest?

Keep it on the sidewalk. March in an organized fashion. Do not break any laws while protesting. Don't even jaywalk. The police may be looking for any reason to arrest you. You cannot use "free speech" as a shield against arrest. Remember, even though you are allowed to protest and march, you can still be arrested for any little infraction you commit while doing so. Jay-walking is the most typical. Some states, while controversial and unconstitutional, have a law prohibiting 'disorderly conduct' which sometimes includes things like cursing out loud in public with no legitimate purpose. Also, keep in mind that oftentimes it's the person next to you who will cause you to be arrested. The police may view the entire group as one person.

Here is how that goes: People get bold in crowds. They like the anonymity of a large group where they can hide. So they will do things they might not do if they were walking by themselves -- smoke a joint, key a car, urinate near a storefront, etc. The police can then arrest that person and they will deem anyone around him or her that is in the way of that arrest as a possible threat to officer safety or an accomplice in the criminal act that they observed. Organize your protest in advance. Assign two team leaders to each group of twenty people. Go over your route with each other in advance. Talk about the importance of all of the above.

What should you do if you are stopped and questioned by police?

You do not need to bring ID with you. You don't need to speak to the police. If you do, the only answer you should give is that you are exercising your right to remain silent. Do not reach for your pocket or in your bag without getting permission from the officer. (By the way, don't bring a bag and don't carry anything in your pockets.) This is not because you need permission, but because you do not want to put the police in fear of what you might be reaching for. Be courteous but firm in not giving up any of your rights.

Here's an example of how you can politely but firmly assert your rights.

But do as the police tell you. You are asserting your rights with your words not your body. The easiest way to give the police an excuse to arrest you is to become hostile and physically avoid or ward off their advances. Now you are "resisting arrest" and they can arrest you. In many states you are technically allowed to resist an unauthorized arrest, but you never want to. It's dangerous and you will find yourself battling the prosecutor in court over what is essentially your word against the police officer's. So, to recap, if you are stopped:


1. Be courteous
2. Don't offer answers to questions. Assert your right to remain silent.
3. Do not give permission to search yourself or anything you are carrying.
4. Don't carry anything
5. Do as you are told, physically. If they say "get down on the ground," get down on the ground.
6. Ask for their card and badge number. Remember, there will likely be a lot people recording with their cell phones, so you may get what you ask for.

What should you expect if you are arrested?

Get bored. Expect a long boring day and maybe a night or two in jail while you wait to be brought out before the judge at arraignment. All of the same rules as above apply. Just because you have been arrested doesn't mean you are giving up any of your rights. It is unlikely that you are going to be interrogated. You won't have to speak in court other than maybe to say "not guilty" and by the way, always plead "not guilty," even if you feel pretty guilty. Your lawyer will work out a deal later and if it's a small infraction the case will probably be thrown out eventually anyway. It's ok to say "not guilty" even if you are lying. In fact, it's expected. Once you say "guilty, your honor" that's game over.

Do not talk to your cellmates in jail. Assume everyone around will eventually snitch. If you are arrested for a very small crime, like jay-walking, then this doesn't apply, but for more serious offenses be sure to exercise your right to remain silent with your cellmates as well.

If you are arrested, have a lawyer on speed dial in advance just in case. A private lawyer can start trying to speed up the process to get you in and out of court ASAP. If you are arrested for a misdemeanor you should be released without any bail. For more serious offenses sometimes a judge will set bail. Bail is like a security deposit to ensure your attendance at court -- as long as you don't flee the country, the bail money will be returned to you at the end of the case. The problem with court-appointed lawyers or legal aid is that they typically don't become your lawyer until after you've been arrested and brought to court. The problem with private lawyers is that they cost money. Have a private lawyer for your group in advance. If twenty of you are going to protest, perhaps you all can pre arrange to hire a lawyer in the event that any of you are arrested. This way the lawyer can be contacted immediately and is "standing by" for just such an emergency. You probably don't have to pay the attorney unless you actually use her/his services.