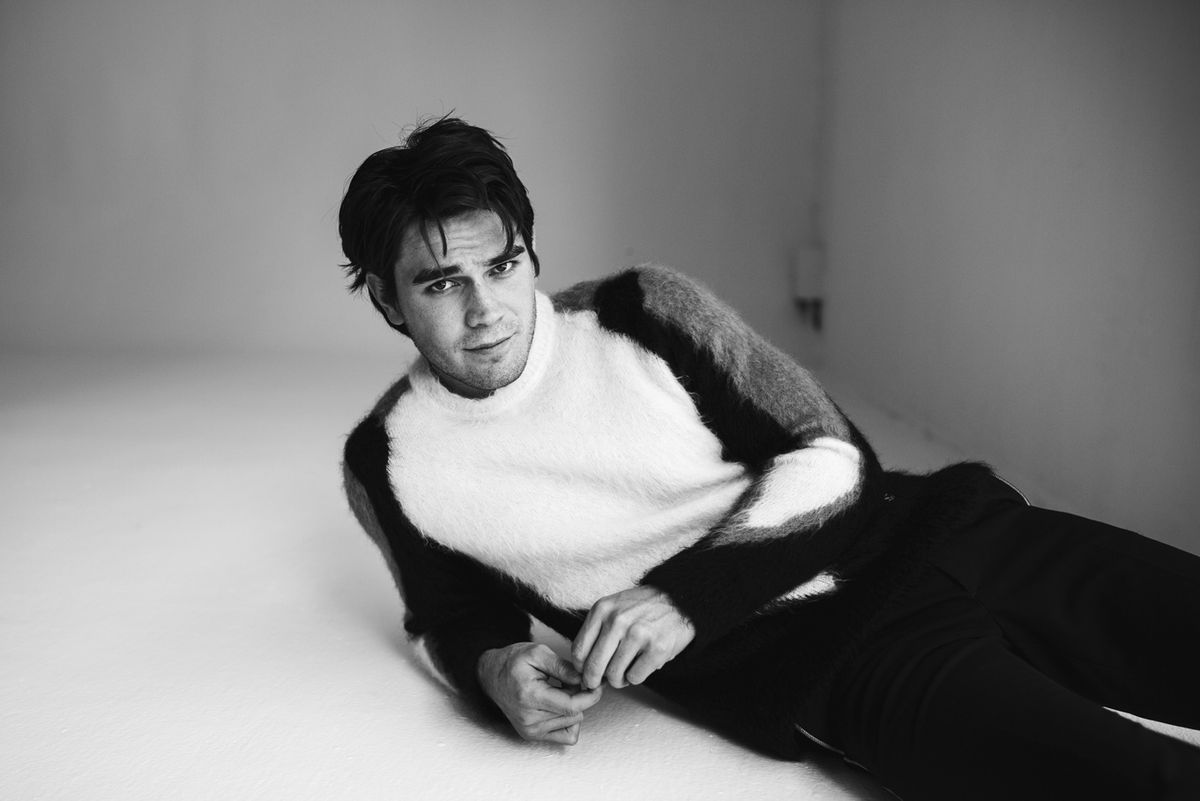 The New Zealander shines as Archie on CW's "Riverdale."

In a jump only a select few have successfully landed, KJ Apa has gone in two years from being a local New Zealand soap star to a bona fide Hollywood heartthrob. Playing the lead role of Archie in Riverdale, CW's live-action adaptation of the iconic all-American comic book series, the 19-year-old Samoan-Kiwi is now at the helm of one of the biggest teen dramas on television. It's something he deems a real "responsibility," made all the more so by his rapidly growing social media following. Despite his youth and million-strong fan base, he says he has "no idea" about social media and sometimes wishes he could be rid of it altogether. "It's kind of sick because the amount of influence people with this many followers have on other people -- it's really humbling," he says, before adding that social media can also "be dangerous as an actor, because it gets in the way and can take your attention."

KJ's self-awareness is a big part of what attracted him to Riverdale. He says the show's humanization of Archie injected depth into the character in a way the comic book couldn't. And although Archie 2.0 (spoiler alert!) has an affair with a young teacher, it's his struggle with balancing two all-consuming passions (music and football) that's perhaps most relatable to fans -- and Apa himself. It's a matter of "Which path do I pursue? What move would most benefit my future? What's realistic and what's not?" he says of the questions going through his head and the heads of many other young people.

While it's easy to imagine Apa becoming the next action star or a Gen-Z matinee idol, for his part, he says his favorite actor is Ricky Gervais and that one day he'd "really love to try comedy." Besides, he's still getting used to shooting sex scenes. "I'm always thinking that I have a lot of family back home watching this," he says of filming Riverdale's racy moments. And there are a lot of them. "Every single episode I have my shirt off, so, inevitably, it's going to be gnarly."

I'm also a recent New Zealand immigrant, so I'm so very impressed by how fast you've established yourself here. How has that transition been?

It's moved so fast. I kind of spontaneously came out to the States and everything kind of happened from there. All I'd done before that was A Dog's Purpose and I came back to LA for pilot season, hoping to get a movie, but I ended up auditioning for Riverdale. I hadn't heard anything and then suddenly it was callback after callback after callback. There were a lot of hoops to get through.

Did you know much about Archie growing up? Comic books aren't such a big thing back home.


Yeah not at all, it was only after I researched that I realized it was an iconic American thing. I was so curious how they were going to make the TV show, because I couldn't see how they could make these characters from the comics work onscreen.

What do you think is the major difference?

The comics are like this picturesque world where the characters are all one dimensional and Archie is just having this constant battle between two girls -- he's a bit of a goof. He's messing around. It's a comic book, you know? But the script, it managed to incorporate all those characters and that iconic love triangle but also really humanized them in a darker way.

Riverdale is being praised -- and rightly so -- for creating a teen drama in an alternate universe where each character is still not only multifaceted but very relatable. But sometimes Archie gets called out by fans online for not having the perceived "depth" of other characters -- does that ever get to you?

I mean, people fully have a right to think that. The problems that he's been dealing with weren't quite on the same level as his mates. His best mate has a dad with an alcohol addiction, Betty has all this stuff going on, Veronica has all this stuff going on. Archie's the guy that's trying to help everyone and trying to deal with the constant battle between football and music! [Laughs]

But that's something I'm sure a lot of teens are having to deal with.

Which path do I pursue, what move would most benefit my future, what's realistic and what's not? Yeah for sure, I reckon, so it doesn't really faze me. The thing about social media as well, for me I've really got no idea. Now I've got you know, one million followers.

Yeah and it's kind of sick because the amount of influence people with this many followers have on other people, it's really humbling.

Does that get overwhelming?

I honestly thought about deleting my Instagram and Twitter and stuff. I know I can't, but I just wanted to do it. It can get in the way of the actual work. It can be dangerous as an actor, because it gets in the way and can take your attention.

It's such a bizarre thing, especially because so often your value is quantified by your following. Does it play a part in getting roles?

Oh yeah 100 percent. It plays such a big part. I've been into auditions where you have to fill out how many followers you have on Instagram and when I saw that, honestly, I just walked out. The cool people are like under 500 [followers] and then there's this awkward stage of 2000, 3000 [followers].

Did you actually walk out!?

We also have so few exports from New Zealand who have reached the level you have. Can you think of actors whose careers you'd like to emulate?

Oh, Mark Wahlberg. I've always followed him, but I'm also a massive fan of the Rock. Probably his biggest fan.

Okay, wow I could not have anticipated the Rock. Please break that down for me.

I used to watch WWE as a kid, he was the guy for me. He's Samoan as well. My favorite actor of all time is Ricky Gervais, though. He's a legend.

Really? Would you want to go the comedy route?

I would love to try comedy, but I'm really just learning.

Are you getting recognized more and more since the show's become such a hit?

Oh there's definitely areas where you get recognized more. It's definitely worse here with my orange hair, but it's gnarly in New Zealand. I got into fights when I was on [New Zealand soap opera] Shortland Street in public. I need to learn to just chill.

I was just at the train station with some of my mates, and this guy was saying shit. No one found out about it, I should've walked away, but it's real hard for me to walk away, when someone is calling you out to your face.

It must be bizarre to be branded as such a heartthrob. I can imagine that's weird, knowing people back home are seeing you in that context.

Exactly. When I do those sexual scenes I'm always thinking that I have a lot of family back home watching this. It is weird and you can never really get used it. When I read the pilot though, it wasn't difficult for me to see that's the direction they were taking. Every single episode I have my shirt off so inevitably, it's going to be gnarly.

We also come from such a conservative mentality, I mean, is it intimidating is it knowing you're going to be sexualized like that?

Not intimidating at all. It's always weird to be cast like that, but it's such an honor to play a human version of these characters for the first time, you know? It's a real responsibility. I'm so thankful.