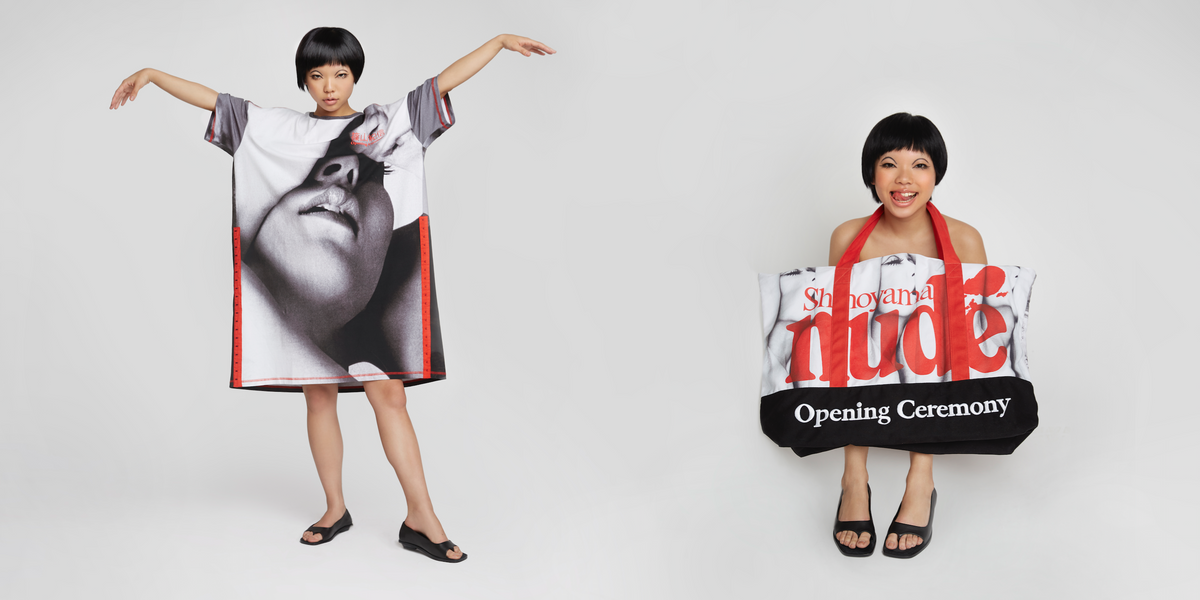 New York City retail staple Opening Ceremony has paired up with Japanese Kishin Shinoyama for their newest capsule collection, which features photographs from his iconic book nudé printed on goods ranging in price from a $65 tote bag to a $525 dress. The collection, which consists of sweatshirts, totes, shirts and dresses, is available in stores and online today.

The black and white images abstract the human form, bisecting faces and turning limbs into striped patterns. The already amorphous shapes are given added dimensionality and visual interest by layers of organza, bright red text, and the naturally-occurring folds of the billowy garments.

Tokyo-born artist Kishin Shinoyama has photographed everyone from author Yukio Mishima to ballet dancer Vladimir Malakhov to artists John Lennon to Yoko Ono. He followed Lennon and Ono around New York City for 5 days in September of 1980, taking over 800 photos — including the iconic image of them kissing that became the album cover of Double Fantasy —and orchestrating one of the last photoshoots that the couple did together before Lennon died that December.

He is known for photographing celebrities for magazine covers, documenting daily life in Japan, and capturing the nude figure. He visited northern Japan in 2011 to photograph the landscape after an earthquake and tsunami hit. He also famously used a "Shino-rama" technique, taking photographs with three cameras simultaneously to make panoramas that captured the vibrancy of 1980s Japan, a time when he felt the country's, "economic bubble was at its most flamboyant."

Shinoyama also pioneered "gekisha," which means "risqué photography," often taking nude photographs of female models in outdoor city landscapes. One such photoshoot sparked controversy a few years ago when he was accused of public indecency, an accusation to which Shinoyama responded, "once freedom of expression is lost, it takes time to recover."

His photography captures body parts at unusual angles and formations, elongating torsos, positioning limbs akimbo, and justaposing multiple subjects as if they're photoshopped together. He treats the human form with reverence, as if it's a living sculpture, privileging a new way of seeing.

Check out images from Opening Ceremony's line, below: