by Gabby Bess
PAPERMAG
09 September 2014
Since Kim and Kanye are noticeably missing from the NYFW action this year while on the Yeezus tour, we've travelled back in the fashion-time continuum to see the couple's NYFW style evolution. From Kanye's pink polos and Kim's Heatherette modeling stint, here's the magical history of Kimye in fashion week pics. 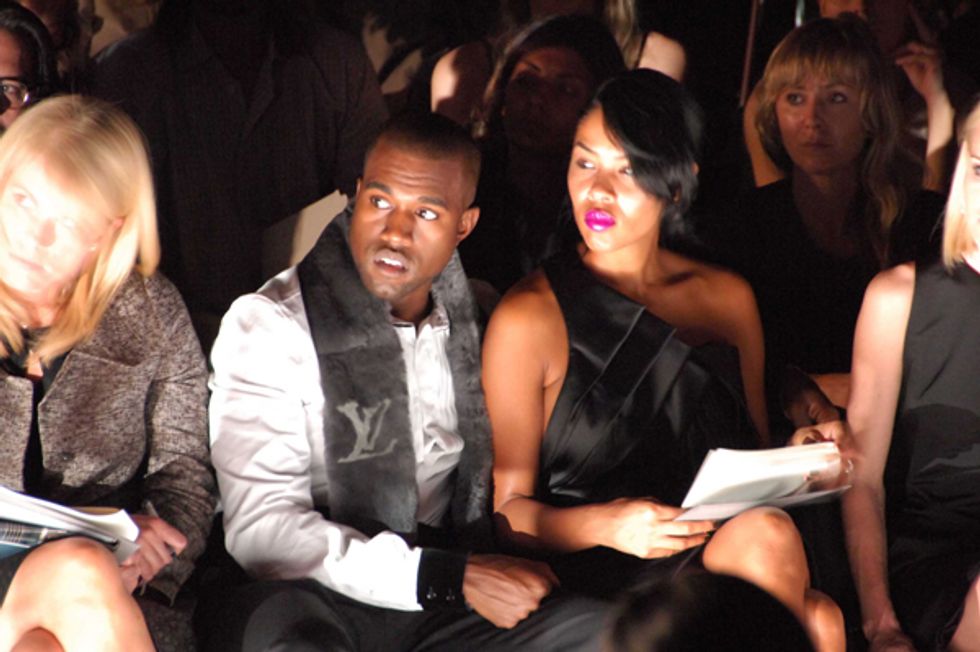 It's hard to believe that in 2007 Kanye had an even bigger chip on his shoulder than he does now. Before he was publicly feuding with the fashion house, he was out to prove how much he loved fashion by wearing as many LV's as possible 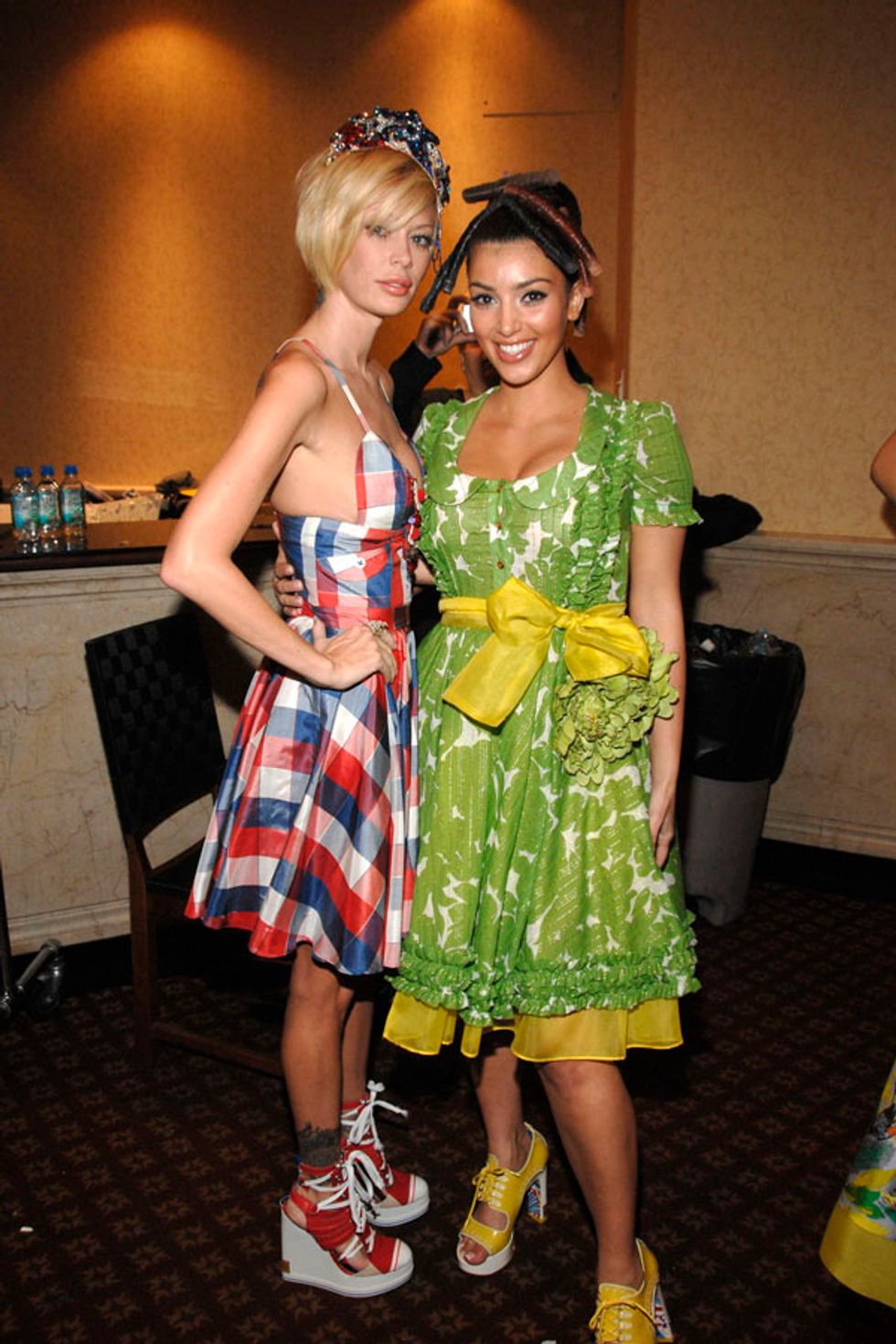 Kim Kardashian and Jenna Jameson in Heatherette via Patrick McMullan 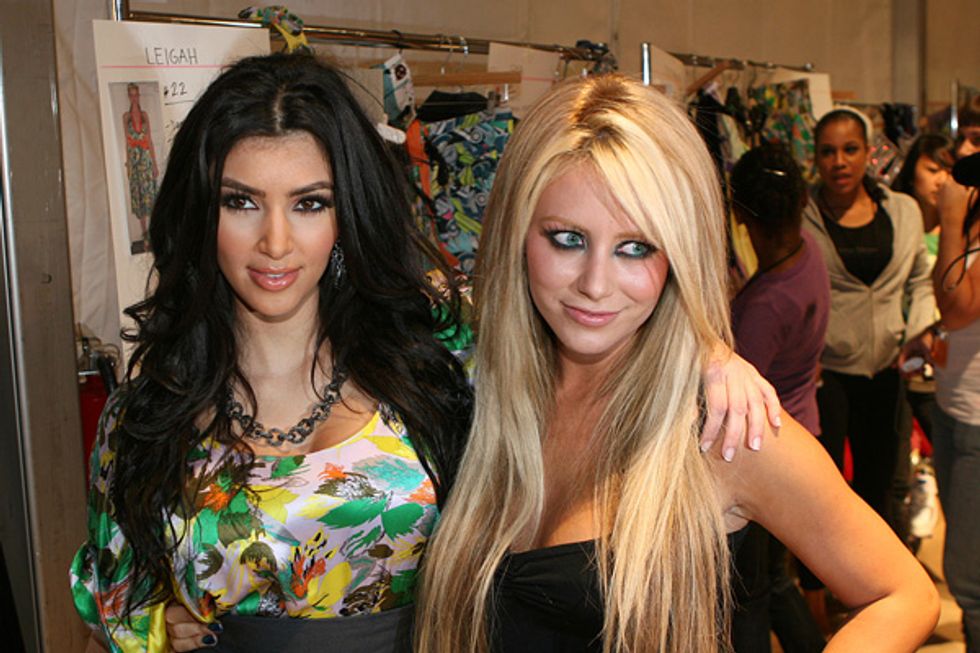 Kim Kardashian and Aubrey O'Day backstage at Heatherette via Patrick McMullan
Kim: The Heatherette Modeling Phase
Holy mid-2000s, batman! Heatherette, sneakers as heels, and a Danity Kane member makes for a dizzying nostalgia that we were definitely not prepared for. 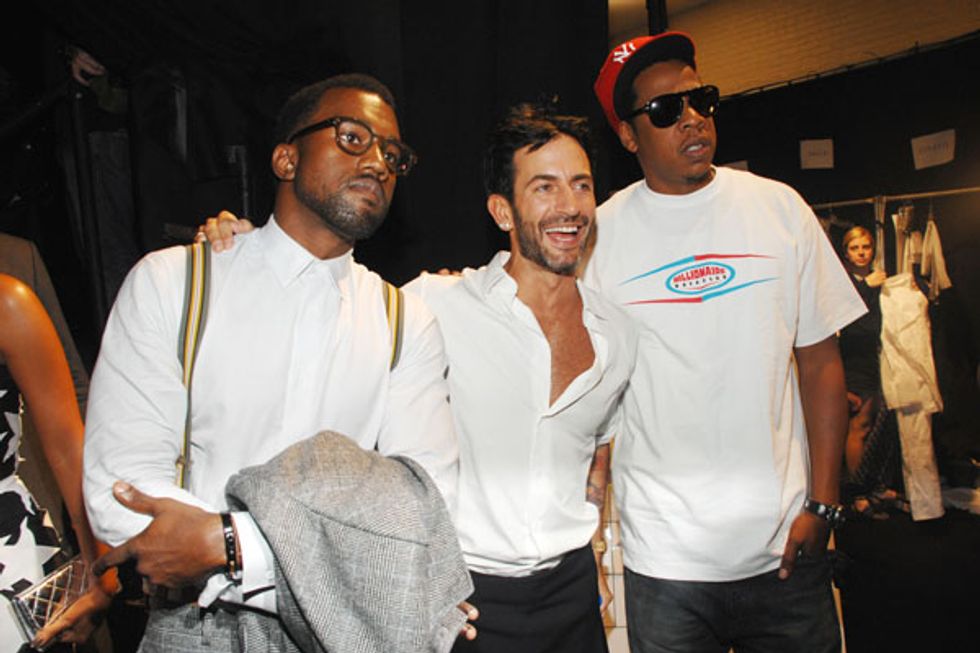 With the throwback electro-pop of 808's and Heartbreak in full effect, Kanye West's fashion week style was fittingly retro. At Proenza Schouler's S/S 2009 show West was unabashedly sporting head-to-toe tweed, fake glasses, suspender's and a literal backpack. Jay Z, on the other hand, was notably ahead of the trends in a #normcore look before that was even a thing. 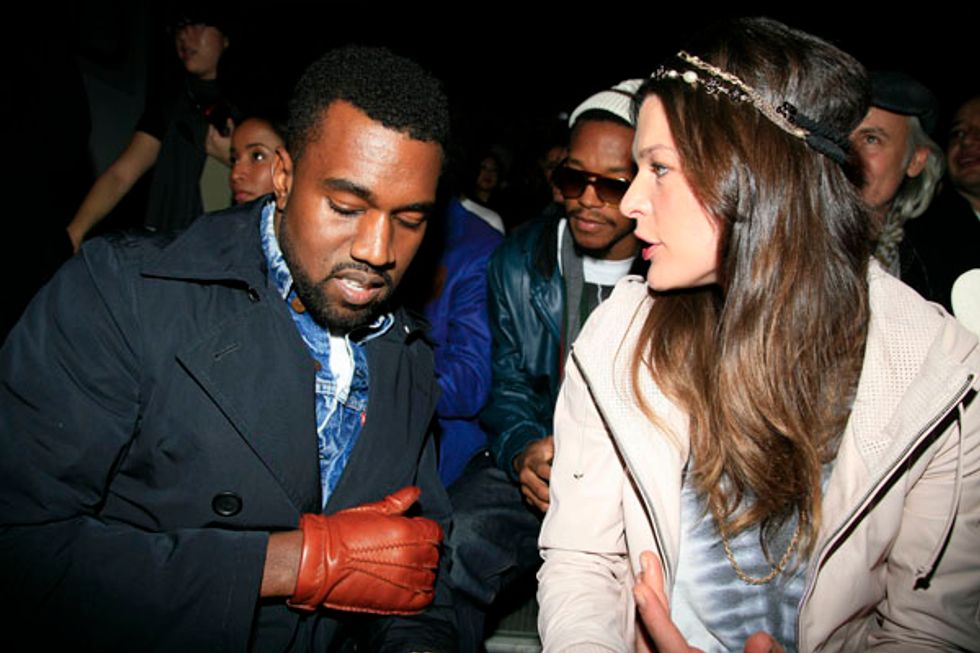 While 'Ye has definitely looked Micheal Jackson-ier, we appreciate this subtle glove tribute. 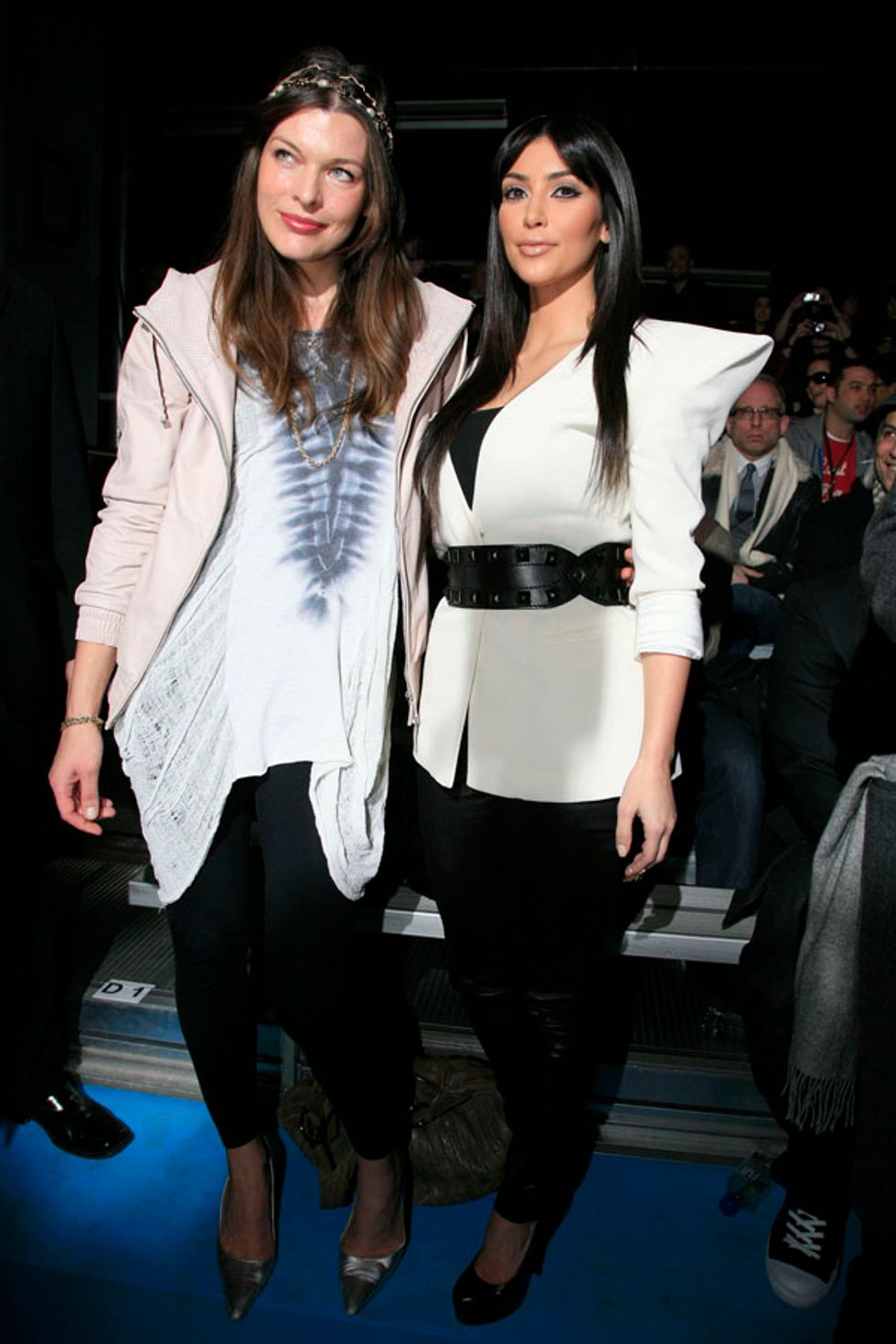 In 2009, Kimmy K was on the cusp of "international success" -- according to her Wikipedia page. With her reality show and endorsements for things like Va-Va-Va-Nilla cupcakes, it was time to go "high fashion." Based on the ensemble that Kim wore to the Y-3 show, we're guessing that Kim found style inspo in Lady Gaga -- whose over-the-top looks, unsurprisingly, don't really work without back-up dancers in matching outfits. 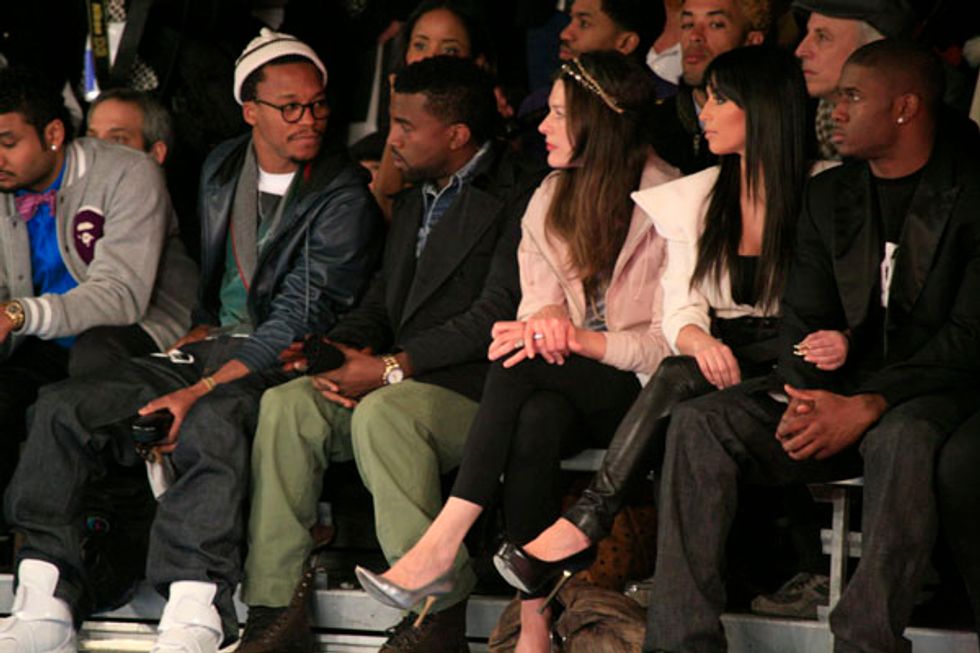 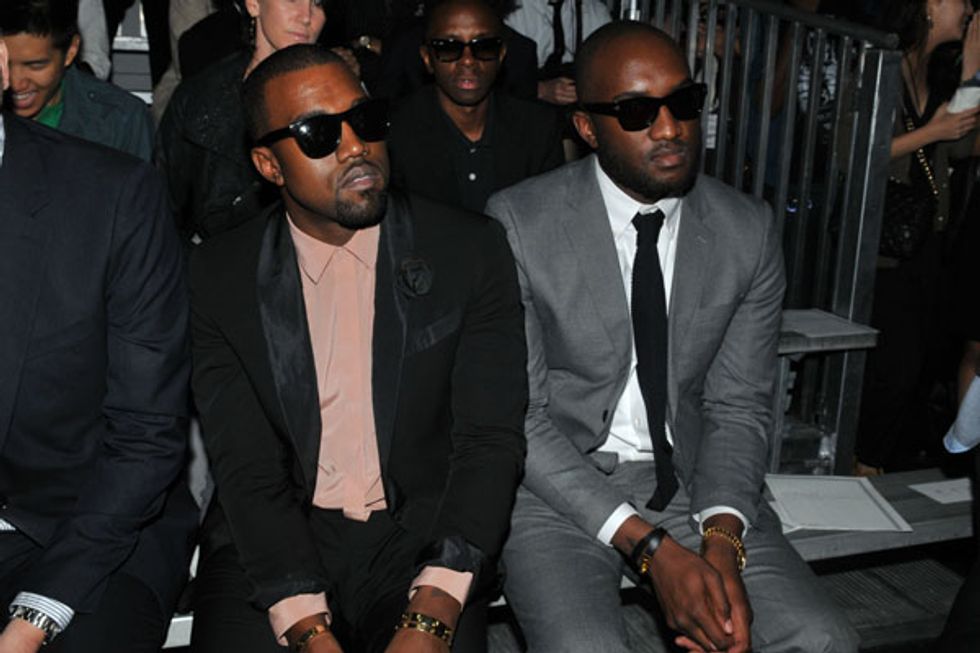 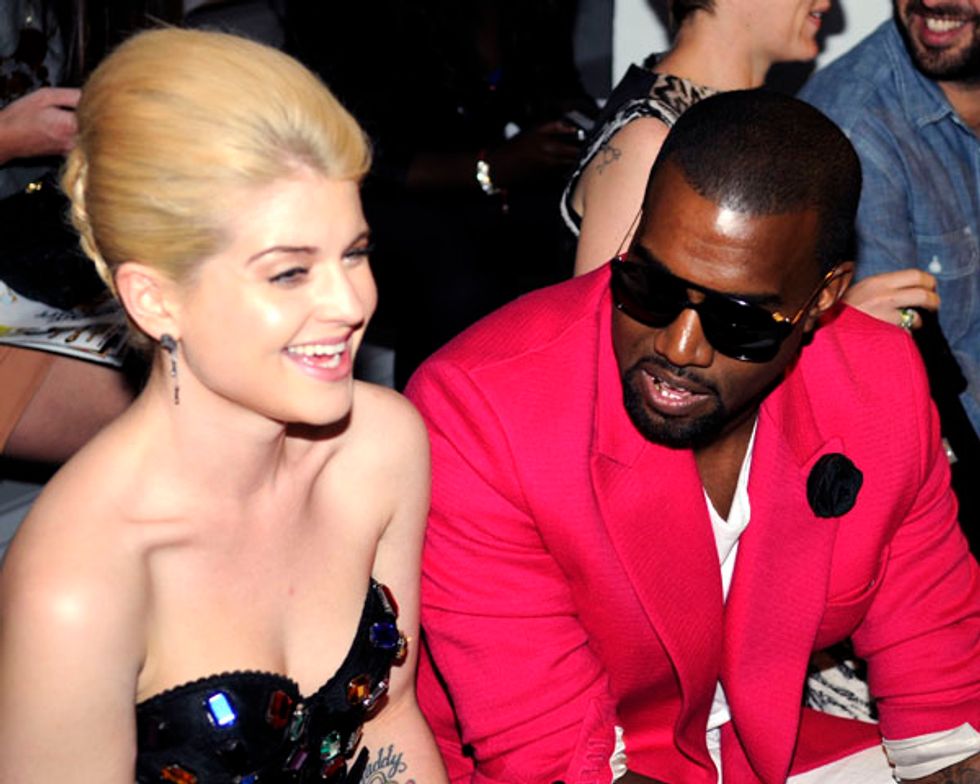 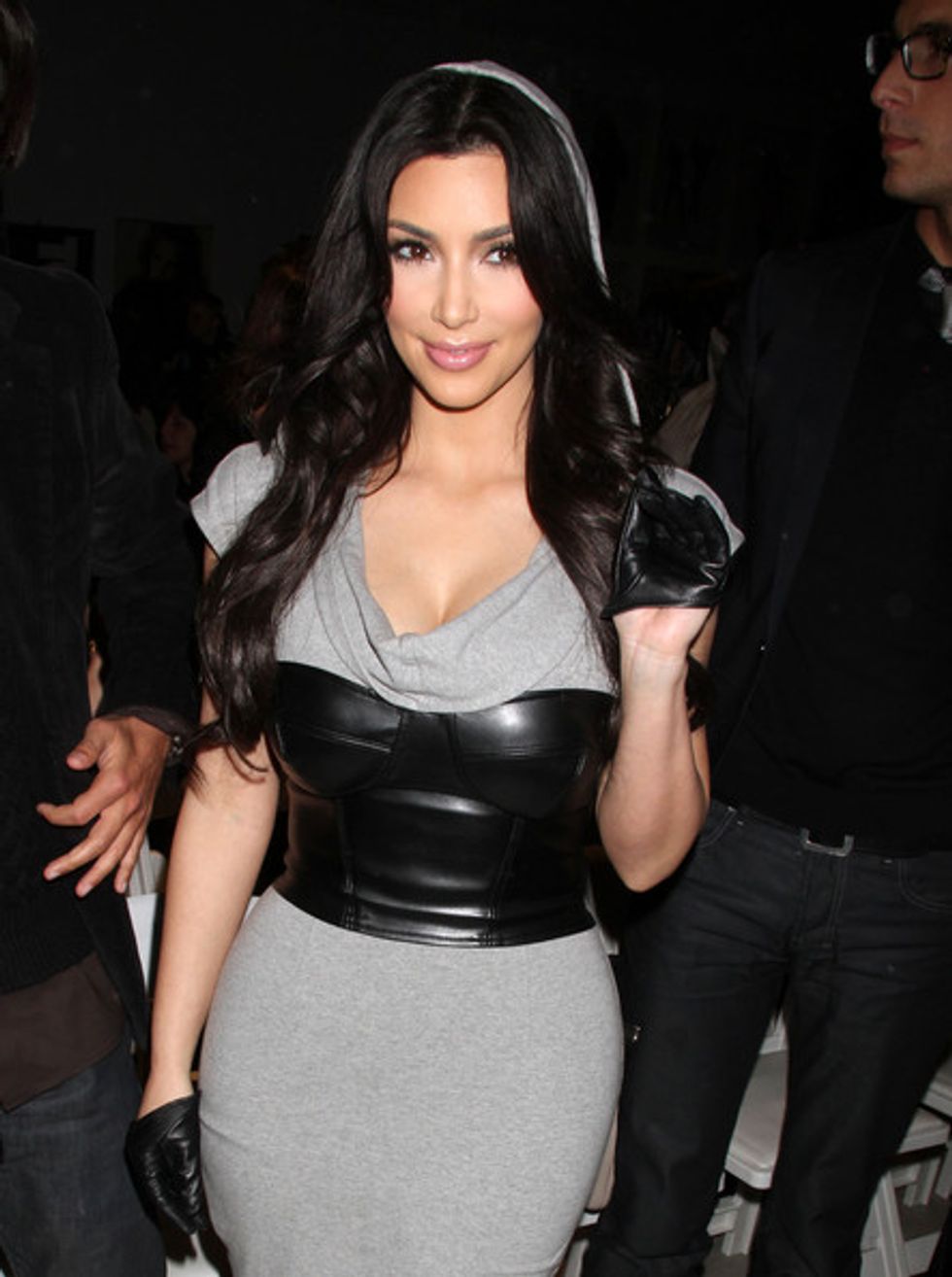 Noticing Kanye's glove moment from two seats away, Kim decided to try it out for herself at Style 360 for Bebe. Adding her own spin to the look, she went with a matching leather corset and hood. While they may have not been "officially" dating at this point, Kanye was definitely giving her style tips. The evidence is RIGHT HERE, people. 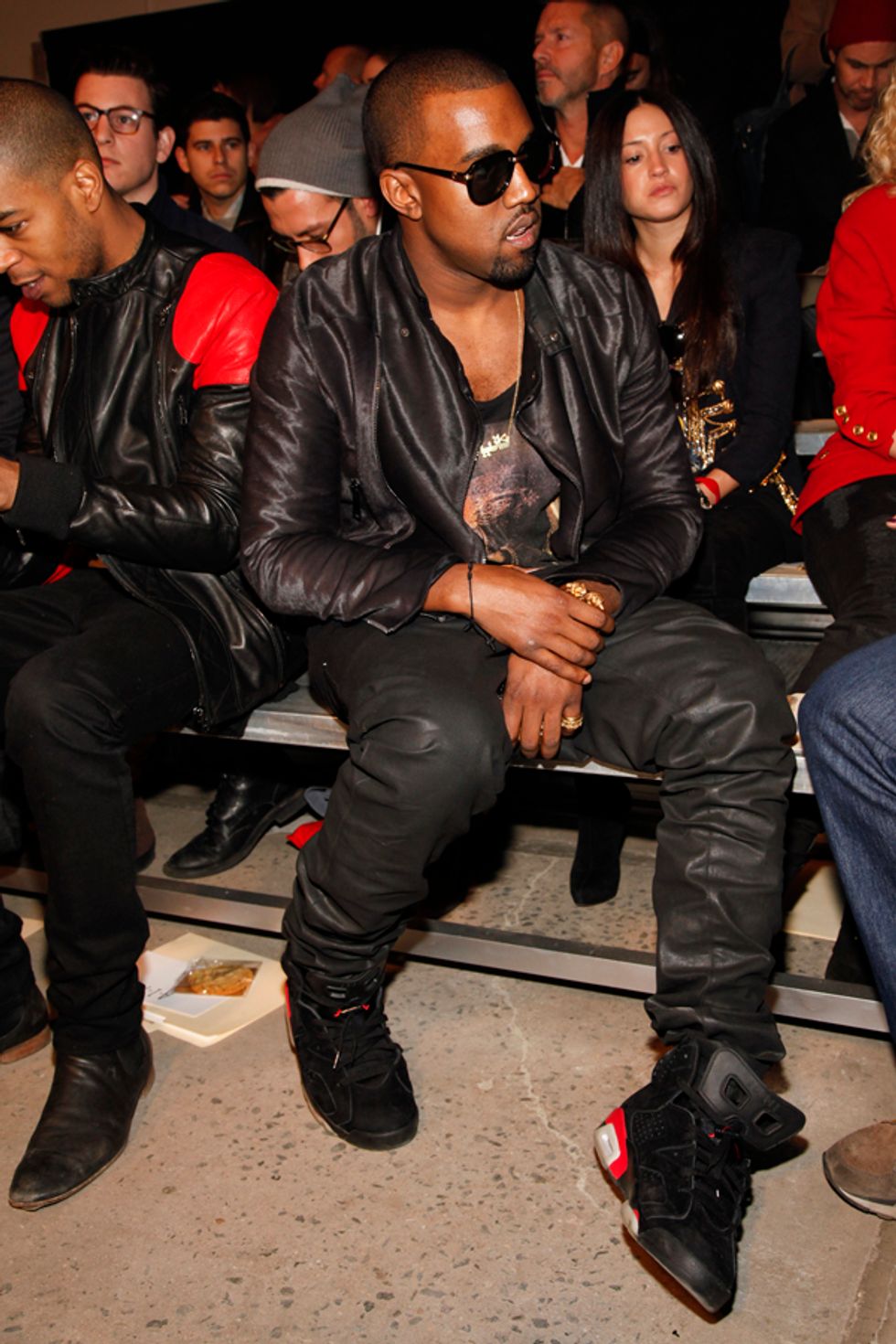 Kanye West at Band of Outsiders in 2011 via Patrick McMullan
Kanye: The Leather Jogging Pants Phase

In the words of Mr. West himself, "We brought the leather jogging pants six years ago to Fendi, and they said, 'No.' How many motherfuckers you done seen with a jogging pant?" Iconic. 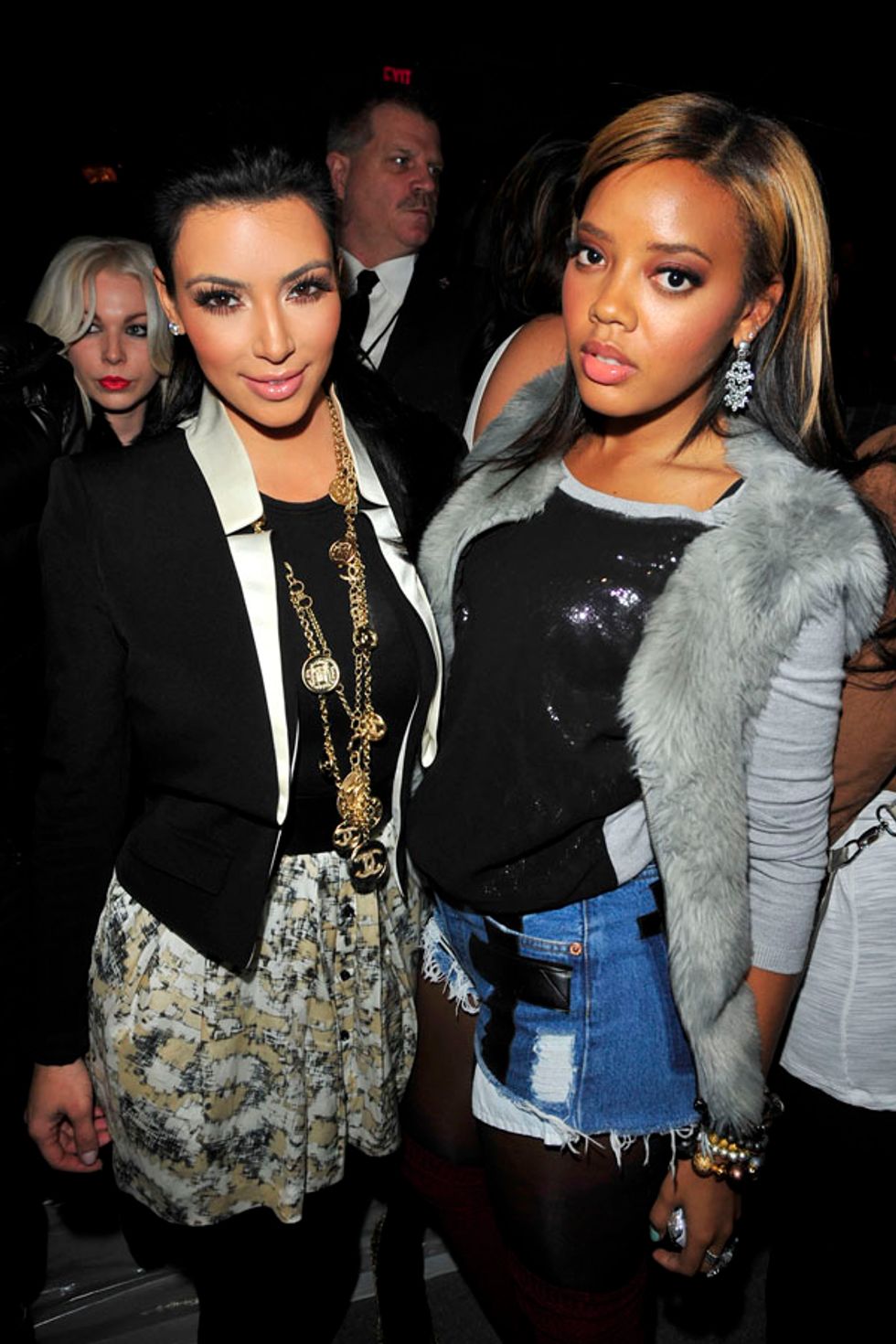 Kim's outfit is doing a lot here but her hair and makeup are on point. We can tell that she's about to blossom into a chic butterfly. 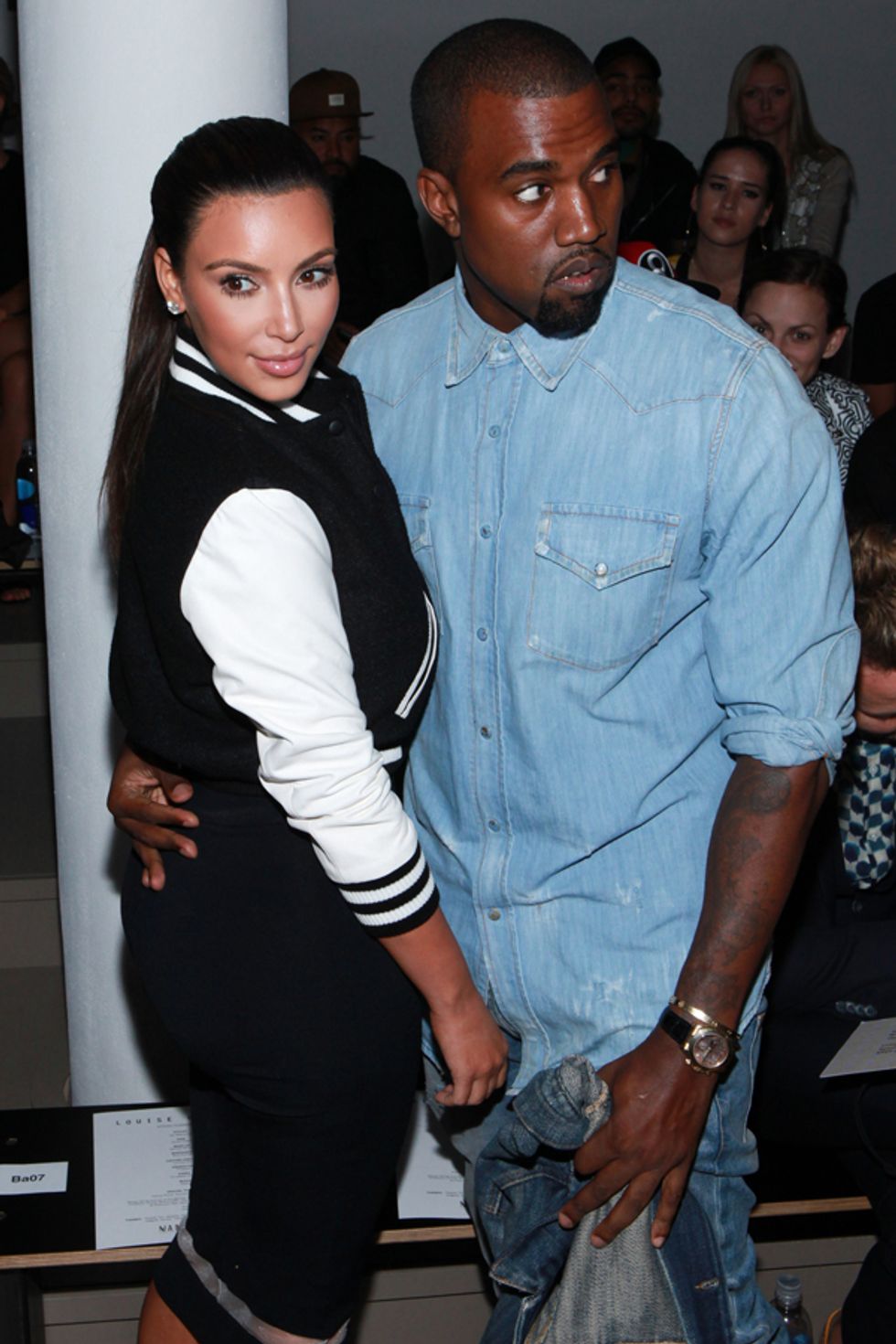 Kanye and Kim: The Minimalism Phase

AKA "The Kanyefication of Kim's Wardrobe Phase." Kanye clearly did not let Kim choose her own outfit at the Louise Goldin spring show. And while they both look fashionably sleek, they totally missed the opportunity to have a classic all-denim power couple moment. 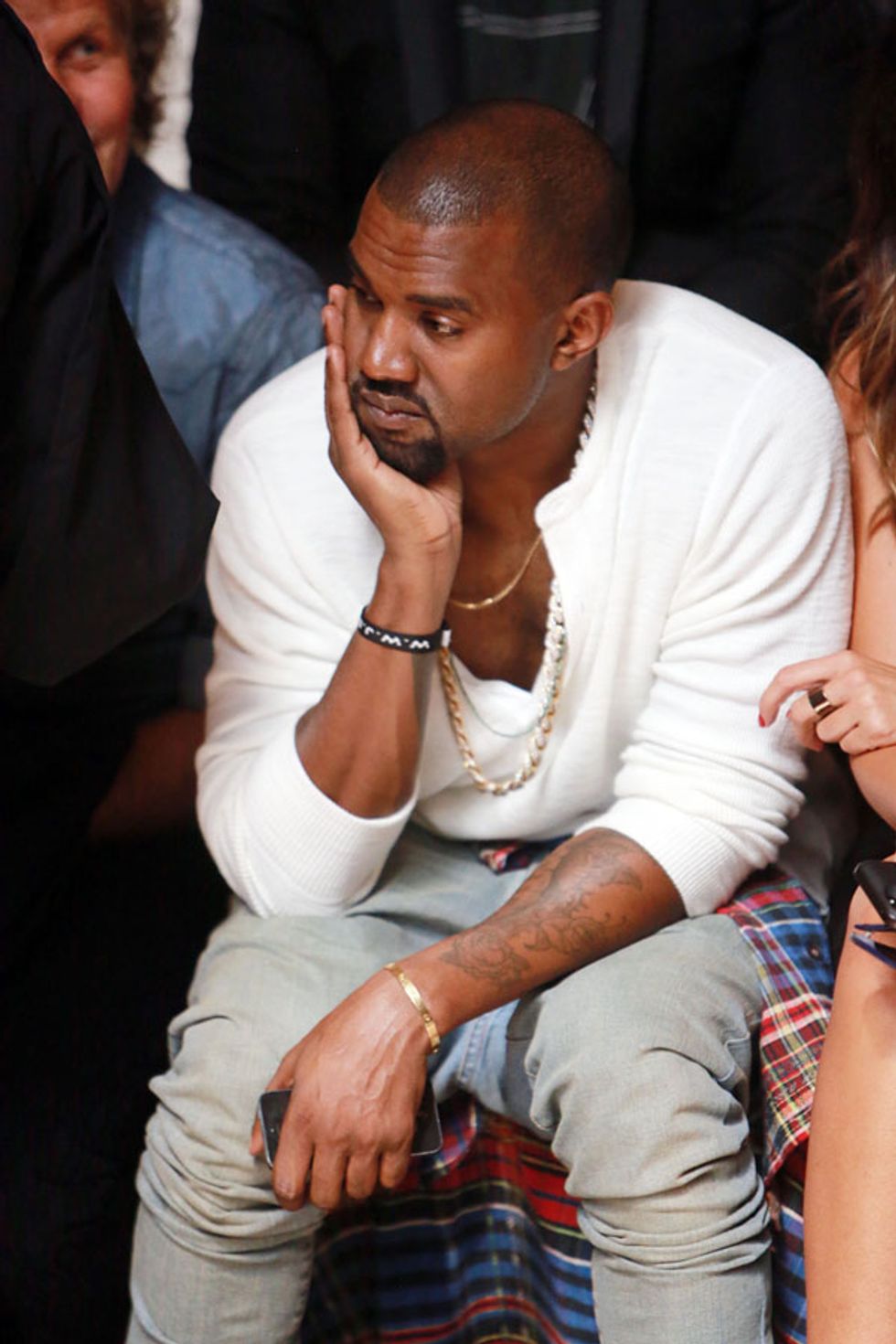 Just kidding. In a white tee, two understated gold chains and possibly a "what would jesus do" bracelet at the Diesel Black Gold show, it looks like Kanye is still heavy into minimalism. Maybe he was just sad because he was away from Nori and Kim, who didn't attend fashion week that year.