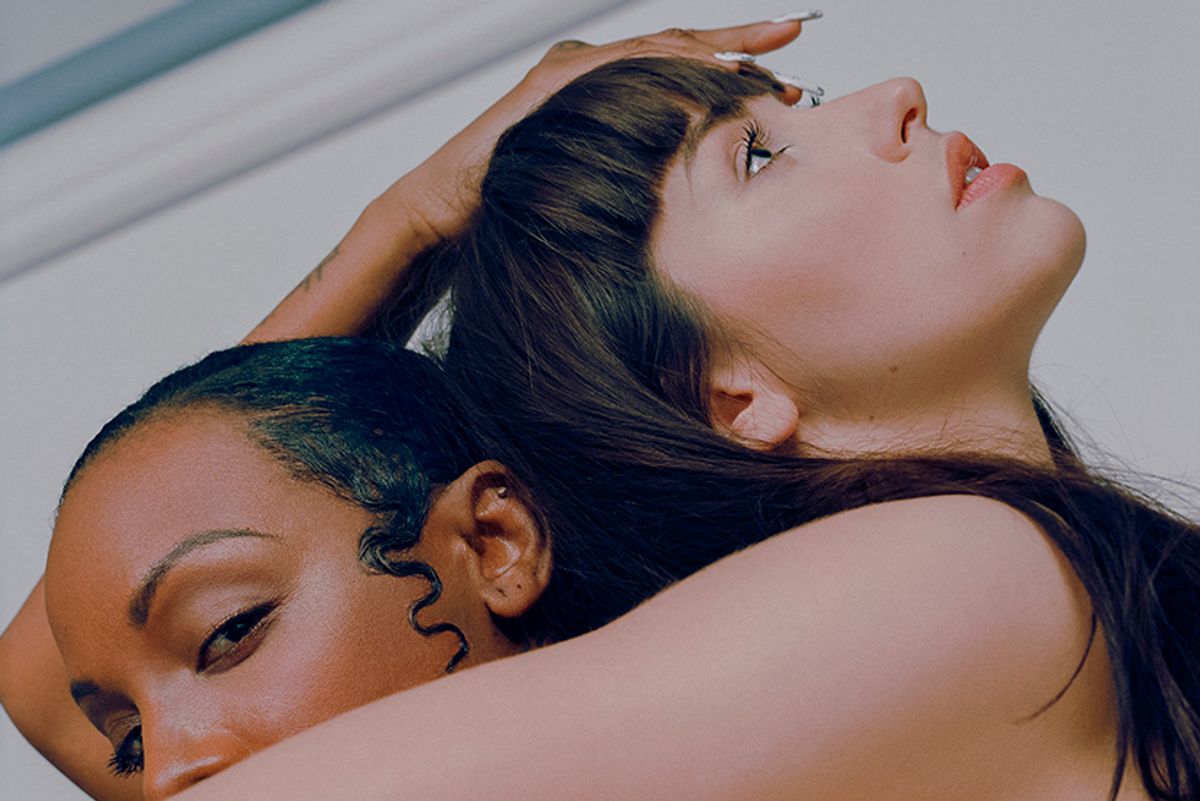 Kimbra and DAWN's 'Version of Me' Is a Vision of Solidarity

The duo talk breaking barriers in the #MeToo era.

When New Zealand singer-songwriter, producer, and multi-instrumentalist Kimbra dropped her third album, Primal Heart this past spring, it proved to be a cohesive marriage of her best ideas to-date, including the decision to write songs that were more vulnerable and impactful than ever.

"Version of Me" is one of the album's standouts, with a minimal orchestral arrangement framing intimate lyrics such as "Next time I'll be kinder with you/ I throw my words around like fire/ They catch on your good heart and your peace of mind," sealed with a tender promise: "There's better version of me/ Stay for the person I'll be."

Related | Kimbra Is Ready For Her Return

Such words read, in one light, as a sincere pledge to a partner to be more accountable, but in another, they serve as a self-affirming promise to love oneself better. R&B auteur DAWN and Kimbra teamed up for a darkly lush revision of the track that fuses both women's musical inclinations, and its results are even more stunning and poignant. The newly released video, directed by Micaiah Carter, features both women nude in various forms of intimate and tender embrace, making "Version of Me" a powerful statement of female solidarity and ownership in the #MeToo era.

PAPER caught up with Kimbra and DAWN to discuss the creation of the song, the video's themes and inspirations, and their ideas on how to continue breaking barriers as female artists in the music industry. Keep reading and watch "Version of Me," below.

How did you know you wanted to work together on this project? How did you decide on this one?

DAWN: Kimbra hit me up and sent her album to me early. It was an honor because I've always appreciated her art, and "Version on Me" just stuck out immediately The honesty and vulnerability was infectious. I thought it would be amazing if we could intertwine vocally and tell our story from different perspectives at the same time.

Kimbra: I've been a fan of Dawn's work from afar and we'd talked about collaborating in the past but timing hasn't worked. When I finished Primal Heart, I sent it to her and invited her to rework a song through her lens if anything sparked. I think it was virtually the next day she sent back a new imagination with her voice interwoven with mine & the song set against a backdrop of dark mysterious synths. I heard the song in a whole new way. She had connected with the lyric in such a truthful way and shifted the song from an internal wrestling to a dialogue between two women searching for self-acceptance. I asked if I could add drum programming to it, and before long we had hit a momentum with the project and decided it needed a special visual moment to partner with the song. Micaiah [Carter] was the perfect person; he captures such tenderness and rawness in his images. He wanted to take the idea further and also shoot a moving film to accompany.

The video is a powerful statement about ownership, something both of you have spoken to in interviews and in your art, visually and musically. In the wake of the #MeToo movement, how does this message further influence your work as artists and as women?

Kimbra: It's about being seen and acknowledging the struggle we all go through in trying to find ourselves and wrestle with our mistakes and the various versions of who we are. Ownership is a key observation, and this statement is owning a glimpse into the woman's journey which is scattered with self-doubt, but also an incredible strength, bravery and fellowship. The more we are seen for who we are, and not just who we are assumed to be, the closer we come to gender equality and empathy.

DAWN: I've been mistreated by men in power so often in my career that I've learned to push on without stating the effects of it. It almost feels like I'm stronger if I just don't acknowledge it. But the more I see women speak openly about their experiences, the more comfortable I feel to speak on mine. I want my art to always be honest and visual. It took me a long time to be this comfortable in my own skin. I went through a lot of insecurities and changes and finally decided to say "fuck it, I'm enough." I want to encourage other women to see they are enough, too.

It's even more powerful to have this video be of two women of different racial and ethnic backgrounds. How do you feel we can continue to break barriers of race through art moving forward?

DAWN: We have a lot of work to do. There is change happening, but being a Black artist that explores other genres, you realize what an anomaly you are. You're immediately classified because of the way you look rather than the art you make. When you don't have a label, it can be ten times harder to be understood. I'd love to start more all-women festivals with diverse line ups. We need to see more women of color in executive positions in music from publishing to producers to labels. I also think establishments like Billboard and the GRAMMYS need to highlight artists of color in other genres who are emerging and up and coming. It would be a great to see people of color win awards and be recognized in other genres as well.

Kimbra: We just need to see more, more, more diversity, as always, in the fields of influence. We need to keep opening and supporting opportunities for thought-provoking art and daring artists of all backgrounds and races to have their story told and be heard and seen and represented. The path to accepting oneself is recognizing yourself in others, and art is where so many people draw their identity from, so we must insist that the platform is representing our world and the range of human stories within it.