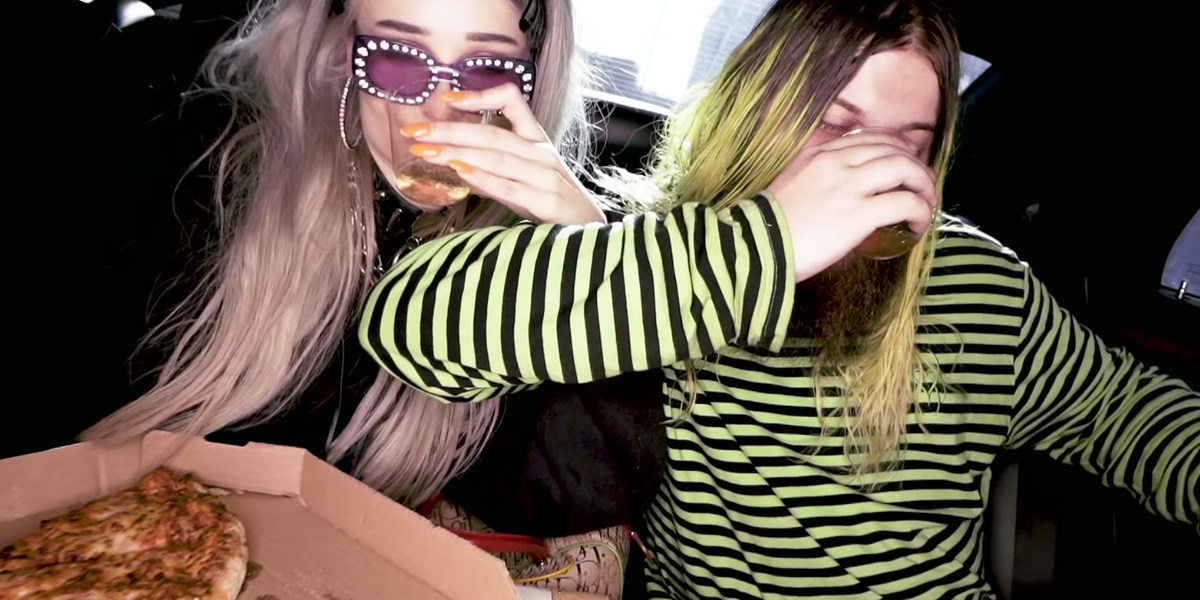 Kim Petras is the queen of the mall — no scratch that — the queen of the early 2000's. The 26-year old pop star stepped out onto the scene last year in the character of a Paris Hilton-esque valley girl with her escapist material-girl fantasy "I Don't Want It At All."

But today, she's exploring a whole new side of the mall and early 21st century aesthetics. Petras has teamed up with longtime collaborator and weirdo emo rock-rapper Lil Aaron to bring to life a full-on pop punk homage to Avril, Blink 182, Hot Topic and the rest, in the form of a new video for Lil Aaron's track "Anymore."

In the video, Petras and Lil Aaron are all of us circa 2001, screaming "fuck you, mom" as we ride our bikes to the mall to laugh at Abercrombie-shopping losers, huff nail polish and score clip-on piercings and fingerless fishnet arm sleeves. They drive around, fake-rapping in a car backseat to a jerking camera, and dance on LA roofs and a room spray-painted with their names.

With a little sprinkle of autotune and a trap choruses courtesy of Lil Aaron, the track combines a buoyant, classic Petras pop beat with equally classic scuzzy spurts of pop punk electric guitar. The song is an anthemic middle finger to the haters you don't need anymore, encapsulated when the pair sing in attitude-dripping harmony: "I don't know you anymore/ there's a reason I ignor / all the stupid things you tell me/ you think you're better off without me."

Lil Aaron and Kim Petras might seem like an odd pair, but they go all the way back to a randomly matched songwriting session last year, the pair tell Noisey, when they co-wrote "I Don't Want It At All." They became tight friends, and have continued to collaborate. Aaron appeared as a feature on Petras's January single "Faded," and of course Petras joined him on "Anymore," released in May, off of Lil Aaron's latest album Rock$tar Famou$. You can tell the pair are genuine friends, as they thrash around doing goofy dance moves. Petras sums up the video and their friendships' vibes for Noisey: "We're both obnoxious brats."