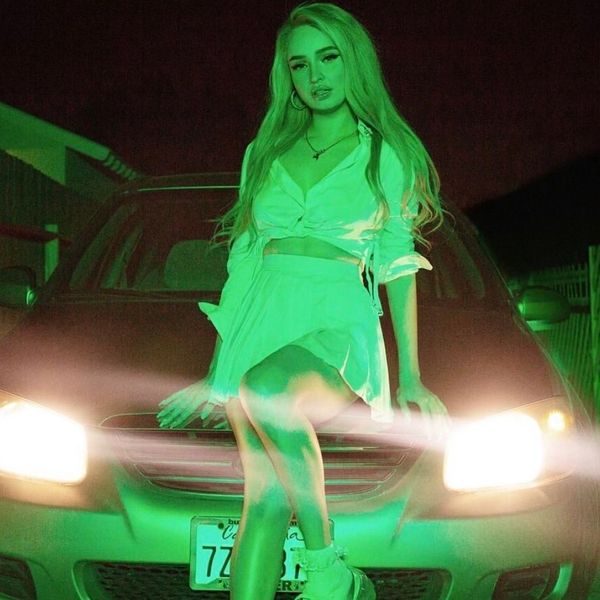 Kim Petras, everyone's favorite blonde pop heiress, released her newest single, "Got My Number," from her upcoming debut album to widespread fandemonium. The song is a cutesie bop, a departure from the stunty melancholy of the album's lead single, "Broken."

The standout moment from the flirtatious tune isn't necessarily found in the production or catchy chorus; it comes in the form of a phone number. Towards the beginning of the song, Petras rattles off 10 digits effortlessly in her signature glam tone, "949-331-0609." It's not potent lyricism, but there's something poetic about the flow of the numbers and the puzzle-like cohesion of their syllables.

Petras is not the first artist to employ this style, as it became extremely popular throughout the early to mid-2000s. Pop artists everywhere were giving listeners a number to dial up on their BlackBerry Torches, effectively engaging them while utilizing the unique beat scheme of the number within the song. While we may never know artists' exact reasoning for using this trope, we know it's consistently worked in cultivating an earworm.

In honor of Petras entering the Hall of Fame of cell-pop artists, PAPER put together a list of our top 5 favorite dial-in hits.

Starting out our list is Petras' new hit, and despite such a recent release, it's already cemented itself among the greats. The track is perfectly in line with the bubbly attitude one might have when flipping open a Nokia to call up their bestie or order a pizza for a slumber party. Oh, and it's also Jesse Saint John's real cell number. Guess it's time for a trip to the Verizon store for some 7 new digits, Jesse!

"Don't forget to text me, girl, at 323-319-6060. There's the number," is the ending lyric for 2010 group Mindless Behavior's smash hit, "My Girl." While dialing the number today prompted me with a random series of numbers and letters, spoken by a monotone voice, the number used to connect listeners to a fan line. One comment on WhoCallsMe.com from 2013 reads, "I KNOW RIGHT I REALLY THOGHT IT WAS THIER RELL PHONE NUMBER AND THEN MY MOM JUST CAME OUT OF NO WARE AND SAID THATS NOT THEIR REL PHONE NUMBER." It's evident this number has stuck in the minds of young listeners over the years, and continues to be one of the greatest outros from a hit at the turn of the decade.

The most soothing sound in the world, better than any ASMR video out there, is quite possibly the sound of Alicia Keys' voice singing, "I feel such a connection/ Even when you're far away." The low-key groove then prompts listeners with an extremely quick phone number, sans area code, "489-4608." This entry is perhaps the smoothest out of all the songs on the list, effortlessly given to the audience, on top of the fact that "Diary" is perhaps one of Keys' best tracks from the early 2000s.

The 2018 breakout hit from now digi-pop royalty, ThatKid, Ayesha Erotica, and Slayyyter, just had to make this list. The fake number mentioned in Slayyyter's epic verse, "1-800-SLAYYYTER," has practically become a trademark of the singer's quick rise to fame. The number is emblazoned across her limited release merch line and is so catchy that we wish we could actually call her and hear about all the things that she purports will "blow [our] minds."

As if there was any doubt what song would round out this list, "Kiss Me Thru the Phone" is not only the best cell pop song ever made, but it's quite possibly the best song to come out of the whirlwind year that was 2008. Nobody, young or old, will ever forget hearing the phone number "Six, seven, eight, triple nine, eight, two, one, two," before Sammie opened up the floodgates to the synth-laden, beeping chorus.