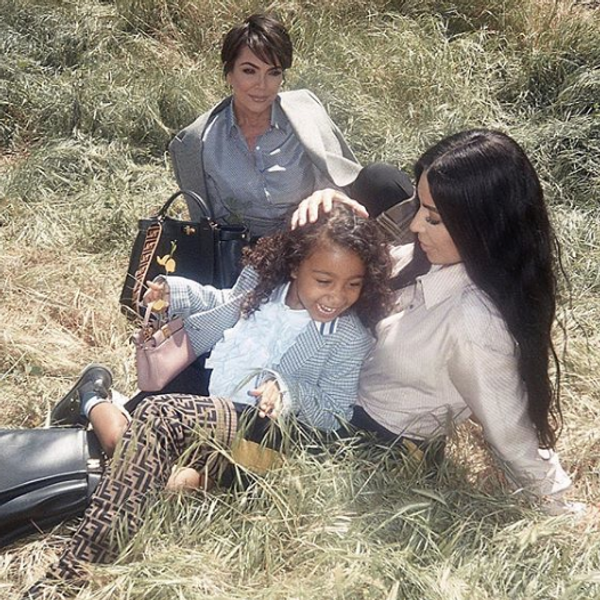 How Kim Kardashian Bribed North West to Model for Fendi

Kim Kardashian's 5-year-old daughter, North West, is well on her way to fashion influencer status, learning from the best of the social media stars (i.e. her mother, fashionable aunts, and even grand-momager Kris Jenner). As the model of everything from her parents' Kids Supply clothing line to custom twinning looks from Vetements, West has now been crowned the newest face of Fendi. That is, next to Kardashian and Jenner...

In the fall campaign for the brand, which celebrates the anniversary of the iconic Peek-a-Boo bag, the trio lounges in the grass, wearing blazer and button-down that has us dreaming of fall weather. West, in a ruffle-front shirt and black-and-white wool checked blazer, even carries her very own mini Fendi Peek-a-Boo handbag in a soft tone of blush pink. Not only are there still images caught for the ads, but Kardashian also shared a video of the shoot that looks as though it could have been a home video, as West runs through the grass next to her grown-up family members. The video was shot by Marcus Hyde, who is also the man behind the lens for that Internet-breaking topless photoshoot of Kardashian on the beach with Bo Derek-style braids in her hair.

While you might think West is an old pro at this point, Kardashian shared that she had to heavily bribe the mini-me for the shoot. In an interview with Grazia, she explained, "We had gummy bears on set as bribes," though she added, "I had such a comfortable day playing and working with them. I have an extremely close relationship with my mom and daughter. They are my two best friends. I will have these memories forever." So, while West is starting off young, sugary candy in hand, we're sure that rider list for shoots will become much more expansive as her negotiation tactics improve. As for now, gummy bears for a Fendi campaign seem pretty good to us.

Fendi on Instagram: “Personal, unique, unseen. @kimkardashian, @krisjenner and North West share an unexpected view of their relationship for #MeAndMyPeekaboo…”

Fendi on Instagram: “Fendi celebrates the special bond between three generations of women and the #FendiPeekaboo. Join the Fendi Family #MeAndMyPeekaboo…”