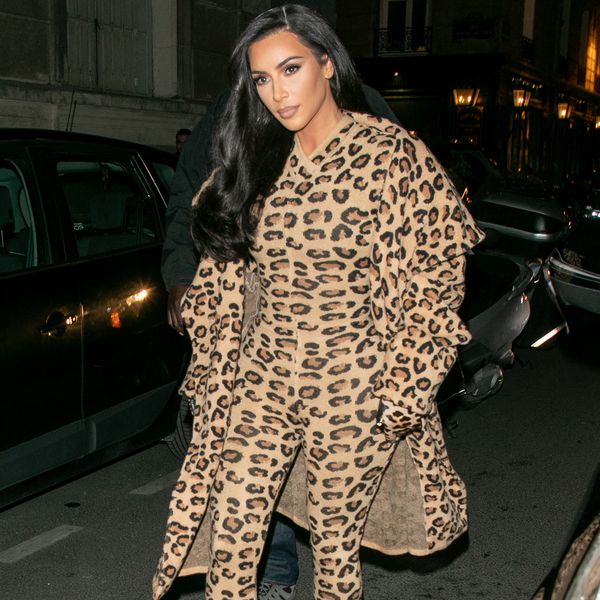 Kim Kardashian West outdid herself on Instagram today. She lounged on a luxurious velvet couch in Paris, clad in an all-leopard print Azzedine Alaïa ensemble, which according to the Page Six,is worth at least $10,000: a bodysuit, jacket, and matching lace-up boots. The images are so luxurious, so over-the-top. And what really sold them was the caption.

"You don't understand," Kardashian West wrote. "This is an [Alaïa]." For the Gen-Z'ers reading this, the reality star was referencing Clueless, the best teen film of all time. In a pivotal scene, Alicia Silverstone's Cher is held up at gunpoint outside the Valley's Circus Liquor, and made to kneel on the ground in an Alaïa dress. She begs for mercy for her outfit.

Azzedine Alaïa, an absolute visionary, sadly passed away in November of 2017. A presentation for the brand's fall collection was held today in Paris, though Kardashian West did not attend. It's not exactly clear why she's in Paris — she hit the tail end of Paris Fashion Week, and did not attend any shows. According to her Instagram stories, she's been eating some very delicious-looking cheesecake.

Paris is a tough place for Kardashian West. Once her favorite city – she even held her rehearsal dinner with Kanye West just outside of town in a little palace called Versailles – she was famously robbed and brutally held at gunpoint there in October of 2016.