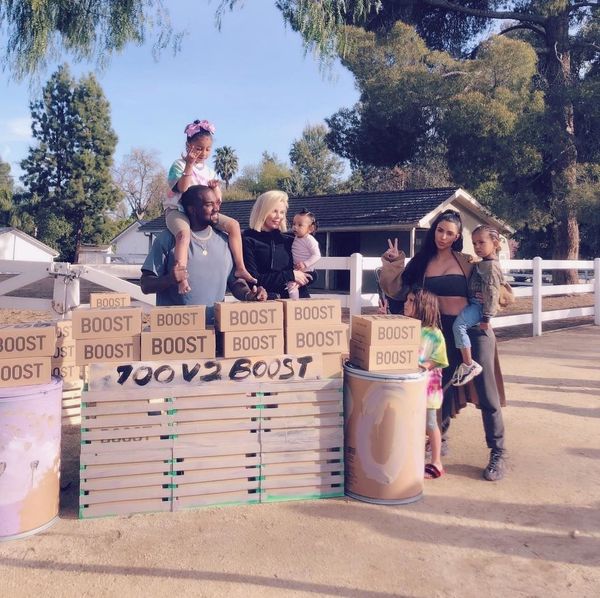 The Kardashian-Wests put a very them spin on the quaint, white picket fence tradition of a family lemonade stand this weekend. Kim and Kanye organized a series of roadside pop-ups across the country where, instead of paper cups of powdered tangy juice, fans could buy unreleased, limited edition Yeezy Boost 700 v2 Geodes for charity. The pair teamed up with Kanye's partner Adidas, the rest of their clan and a few other families around the country for the sale, which benefited the National Alliance for Mental Illness.

Kim and Kanye themselves manned the homemade booth in Hidden Hills, California, with help from North, Saint and Chicago — plus Khloe Kardashian, her daughter True, and Kourtney Kardashian's daughter Penelope Disick. Kim and Khloe of course documented the day on social media, and a photographer found his way out to the sale and captured some pretty cute DadYe moments, if you're in the mood.

Khloé on Instagram: “Today, my incredible brother in law and adidas, partnered with families across America to create homemade pop-up YEEZY Lemonade Stands…”

"In the continued spirit of bringing people & families together, the brand has selected unexpected locations for the stands to connect w communities throughout the country" explained Kim on Twitter of their decision to take on the project.

Mental health is an issue close to the couple's heart. In between the more frustrating things he's said over the past couple years, Kanye's been open about his experiences with mental illness and anti-depressants.

"So I think it's important for us to have... open conversations about mental health. Especially with me being black, because we never had therapists in the black community. We never approached taking medication" the rapper told Jimmy Kimmel.