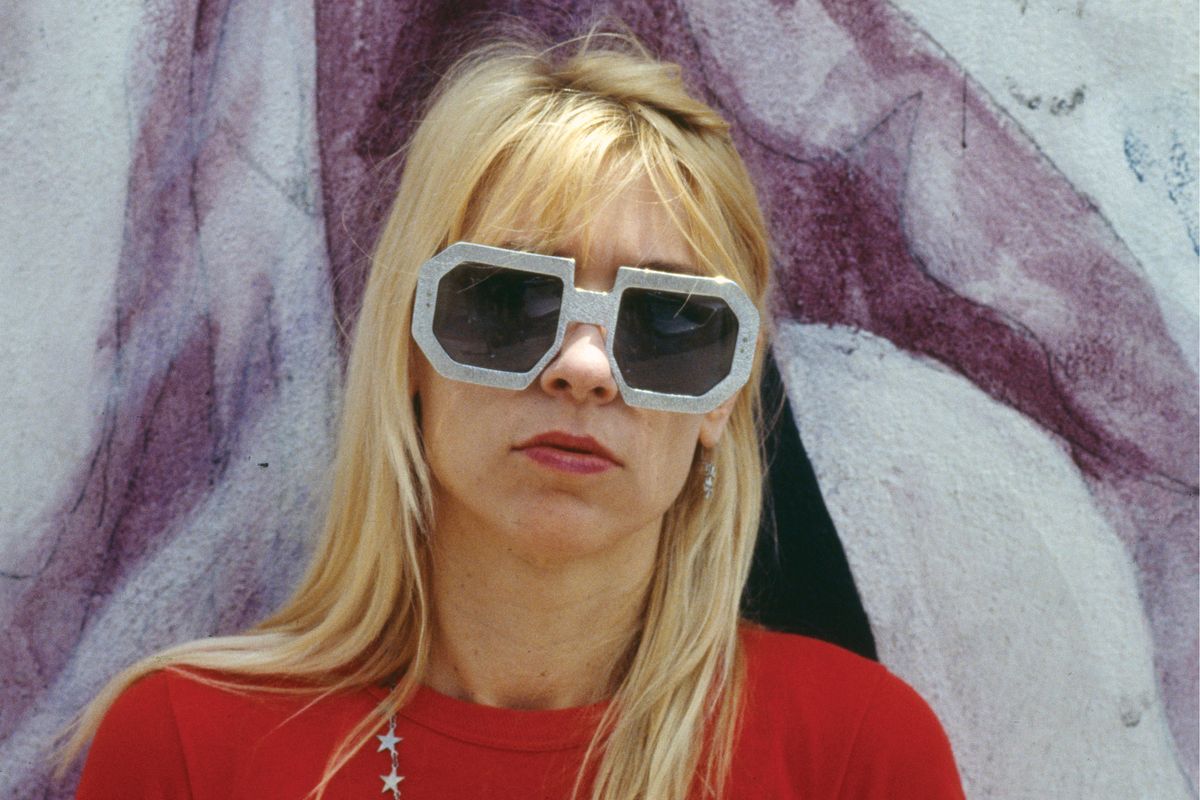 Kim Gordon tends to hide from a spotlight that nonetheless consistently seeks her out. Following her modestly-titled 2015 memoir, Girl in a Band, the musician and artist's new photo book with Rizzoli is called No Icon. It's another attempt at self-deprecation, despite ample evidence contained within that she's perfectly entitled to brag about an inimitably cool series of past and current lives.

Gordon confirms that the storied art book publisher's initial vision didn't include the "no" determiner. "They wanted to do a book about me as a feminist icon," she tells PAPER. "And that really made me uncomfortable. Because, you know, those words are already so co-opted."

So rather than leaning into that more marketable narrative, she dug through her archives to create a casual scrapbook of personal photographs, magazine editorials and X-girl campaigns, Sonic Youth mosh pit shots and visual artworks. There's no chronology, just a mass of imagery collaged together. Zoom out and you get a portrait of an accidentally brilliant career that has outlived decades of passing trends. It proves extremely difficult not to use the i-word when describing it.

Maybe she's no icon, but surely something much more unique and impactful. Below, Gordon talks us through the memories behind a selection of photos that appear in the book.

"This was taken by Richard Kern. It might have been '94/'95, because I think it was after my daughter was born. She was born in '94. I don't know why he just wanted to do the bathtub. I didn't know what it was for, honestly. But we're friends. He also did the video for "Death Valley '69," and we used one of his photos on [Sonic Youth album] EVOL. If you look, there's a rubber duck in there."

"So, not the James Bond movie. This is the band Pussy Galore. I did a series of paintings that were names of noise bands. Even though this particular band wasn't a noise band. They were, you know, the downtown band. I decided to put them in because I think that they should have more recognition. The idea was to take obscure something really obscure, and put it in a context that has different value — the idea that maybe people would buy the paintings the way people buy t-shirts. That was the beginning of the text series [of paintings] I did. I like text-based art; someone just gave me this book called Women in Concrete Poetry: 1959 to 1979. It's pretty amazing."

"That was at St. Mark's Church. And it was a kind of a celebration for Semiotext I think, and I was doing this sort of art performance piece. I often think of it as a dance piece. I have the text in there somewhere in the book, where I describe a guitar player doing sort of heroic moves. And then I pick up my guitar and I kind of enact it. There's also a hand with the guy taking the picture there."

"This is pretty goofy. I mean, the glasses are over-the-top. But I guess it's kind of a cool thing. There used to be this store in Cleveland that had lots of old deadstock clothes from the '60s and '70s. That's where I got that t-shirt. And maybe the glasses. I want to say it was taken on the street somewhere in New York. No one ever wants to use a smiling photo of me. I also have the kind of face that looks really intense if I'm serious, like more than I am."

"That was for "Death Valley." The video that Richard Kern shot. That is an iconic photo, just of Richard's. I think we shot it on Long Island, we were supposed to jump out of the pickup truck. And I suppose we were in the back of the pickup truck. And then the other part of the video we shot at Richard's apartment. Like, we're lying on the floor. I think another picture in the book is of me lying with my guts coming out, and Lee [Ronaldo]'s wife, his first wife, she was going into labor. Anyway."

"So those pants are from the same store in Ohio. I want to remember what it's called. Anyway, it's probably long gone. But yeah, this was when we went on tour with Neil Young. I think it was during the Gulf War. I wore the same thing every night for like two months. Touring with him was pretty amazing. I mean, for us, it was kind of also eye-opening because we were playing arenas. His crowd pretty much hated us. I mean, hippies aren't necessarily open minded, right? But Neil was great. It was great. It was amazing to see him play every night."

"I think so like I had a whole long wall of these, you can see the whole thing in the book. Small drawings and paintings, I was in a group show in Berlin. I like the idea of making mood boards, actually. I was thinking of making some as art pieces. Maybe I'll go back to that idea. Because recently, I've kind of discovered or ventured into the theme of artists who basically make work and just take a picture of it. And the documentation is the work. And it actually really frees you. It's obviously something that's not really sold, but I kind of like that idea."

"I think I was 17, and my friend and I had gone up to Vancouver. We'd hitchhiked actually. And then on the way back, I stopped, way up in California, at the Klamath River, at this place my parents would go every year with their friends to go salmon fishing there. This group of people I've known all my life and sort of grew up with: documentary filmmakers and things like that. Anyway, so this was me, and I was kind of sick at the time and had bronchitis. No shoes and jeans, some things never change [laughs]."

"I was going to school in Toronto, in the mid '70s. My friends and I went down to New York during our holiday break over Christmas or Thanksgiving, I forget. I was wearing this coat that my mother had given me. I didn't really have a good winter look together. My hair had started turning dark. I had this light perm that was growing out. My hair was really weird. Like I really did not feel cool. The guy who took this photo was a Chilean filmmaker and really good photographer. And I like this photo, because it reminds me of a film skill or something."