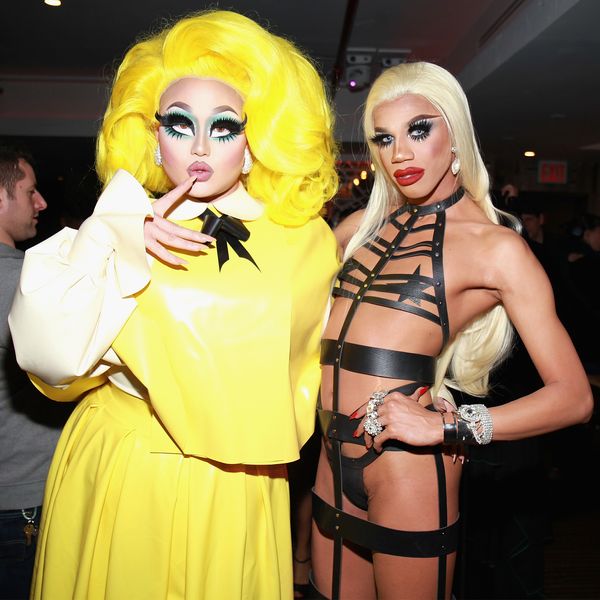 The abundance of fabulous new drag content blessing our screens is one of the few things keeping me going while in lockdown these days. This week alone we have the premiere of We're Here on HBO as well as the highly anticipated first episode of Secret Celebrity Drag Race right after RPDR on Friday.

But tonight is also a special reunion of sorts for Kim Chi and Naomi Smalls, the fan-favorite finalists of Season 8 of Drag Race. The two queens are set to co-host a new weekly drag brunch series with Klarna kicking off at 8 PM EST, which will continue the two following Wednesdays. (They'll be streamed via Facebook Live here.)

"I'm honestly just so excited every time I get to work with Kim," Naomi tells PAPER. "What we're all about is to promote people to be the best versions of themselves and to own that and surround yourself with like-minded people who understand that. We have really great taste in fashion, makeup and drag. Period."

Viewers can expect to see a series of gag-worthy looks (each week has a new theme, starting with "On Wednesdays We Wear Pink"), curated recipes, lip-sync eleganzas and makeup tutorials. Special guests like Aquaria and Plastique Tiara are also slated to make an appearance.

Naomi, who was part of a Vegas residency show before she self-isolated at home in LA when the lockdown happened, says that the pandemic has hit the drag community particularly hard since much of their livelihood comes from live performances and tips.

"It's a little insane because as drag queens and entertainers, a lot of us don't have the typical insurance plan and security for when things [like this] do happen to us," she explains.

"To have the whole drag community pretty much unemployed right now is not the best but I'm really proud of the fact that queens are making it happen no matter what, without a stage and without a drunk audience. They're still going to entertain a crowd. If that means they're jumping up and down on their living room couch in a ballroom gown, they're still going to go ahead and do it."

As such, Klarna pledges to donate $1 for each person who attends the virtual brunch to drag entertainers who have been impacted by COVID-19 at up to $5,000 per brunch. (The shopping service partnered with several Drag Race stars on Shop Like a Queen campaign last year.)

In the meantime, Naomi, a self-admitted Drag Race superfan, will be tuning in like the rest of us to see how this season plays out. "I'm obsessed with Heidi N Closet. I love a bitch who can go in there and kill interviews and not crack underneath the pressure. [She] is 100% herself and I have so much respect for that. I also think Jan got played."