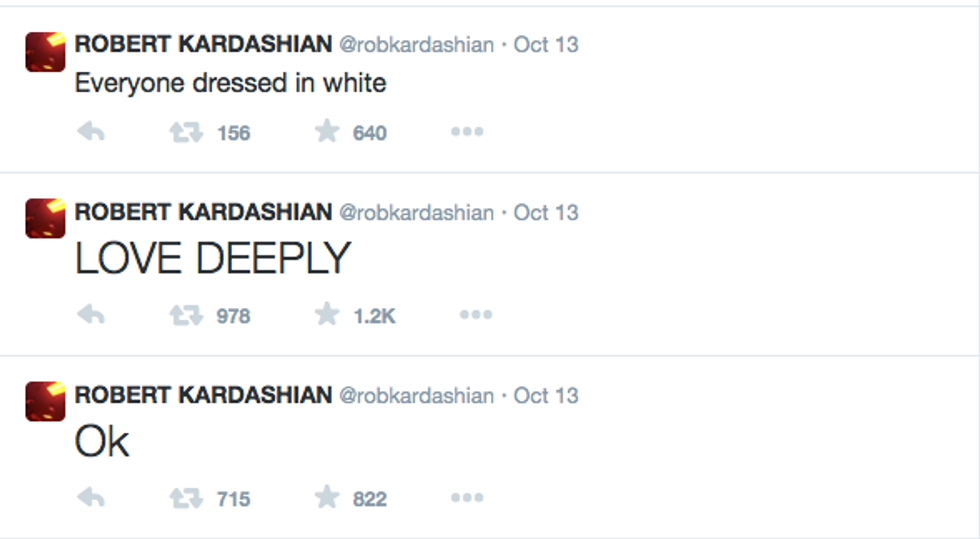 by Elizabeth Thompson
PAPERMAG
Rob Kardashian has long had a mercurial relationship with social media, quietly disappearing and reappearing from various platforms like a sock-designing specter in the night. And when the elusive Kardashian and 2011 Paper Beautiful Person does tweet, it's the sort of :/ to the 0_0 degree stuff that would give even Jaden Smith pause. Which is to say, Rob Kardashian is the best tweeter of all the Kardashians.

Though Rob has over 2 million Instagram followers, his account has sat unused since he deleted all of the photos following his walk-out on Kimye's nuptials last May. That was, until last night, when Khloe and master-phone-hacker Kim took over his account, posting copious selfies and calling out Rob as a chronic "tweeter and deleter." At best, this is just another example of the real familiar warmth and good-natured sisterly torture that comes through on Keeping Up with the Kardashians. Heavily edited "reality show" or not, when Kim told Amanda Fortini in the very pages of our current issue that she and her siblings are "kind of obsessed with each other," you believed her. At worst, this will only keep Rob off social media longer.

Don't let the haters bring you down, Rob. Rise up! Everyone is here dressed in white, ready to love you deeply. OK?