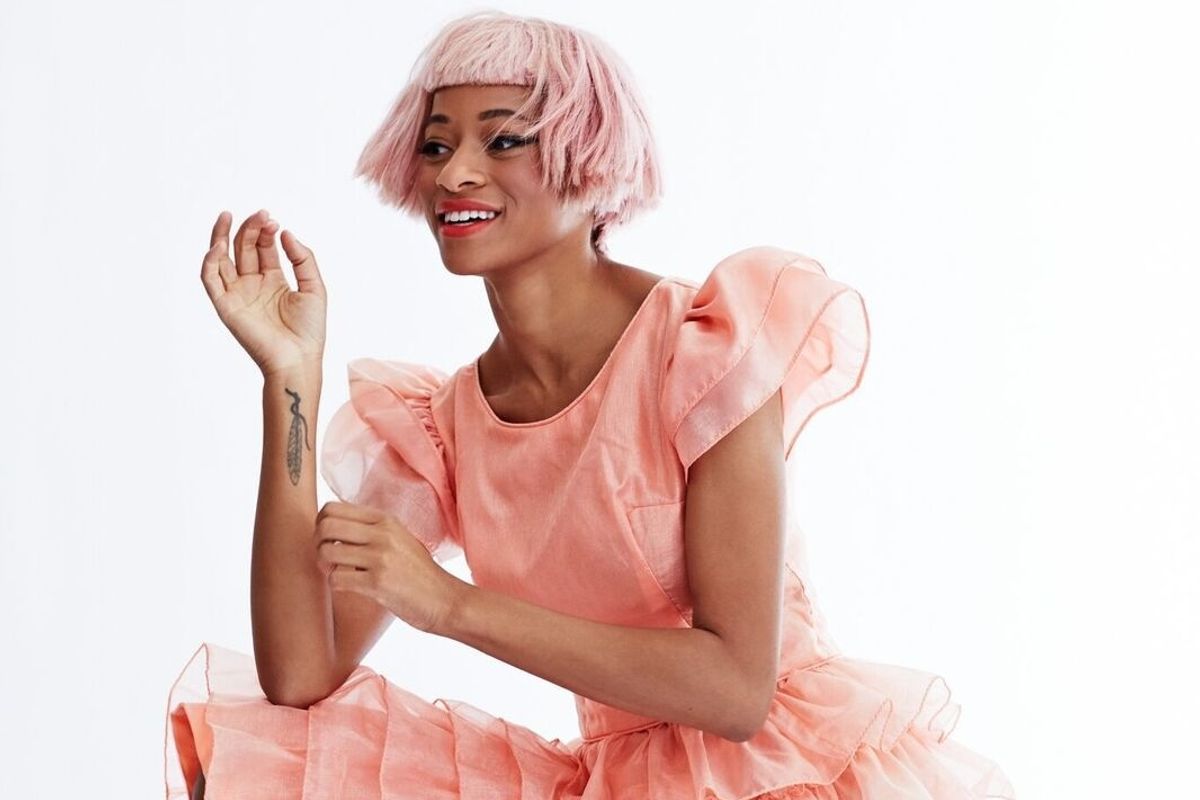 Kilo Kish Returns With a New EP and Renewed Clarity

28-year-old Kilo Kish (born Lakisha Kimberly Robinson) is the type of multi-disciplinary artist you can never quite pin down, but would't want to anyway lest you risk clipping her wings. She began her career in fashion and design, but quickly found her way into music with a voice so intimate and clear that its appearance on songs with prominent rappers like Vince Staples and Childish Gambino felt so natural you found yourself wondering, 'Where do I know this girl from?' even if it was your first time hearing her.

Now, the artist returns with her EP Mothe, a reflection on transformation and rebirth that she says is a direct result of time spent alone, in her head and pondering the bigger questions of existence following a move to Los Angeles. PAPER caught up with Kish to discuss the project, why she doesn't want to be a social media influencer and how she decides to focus her copious creative energy:

Let's begin by talking about the new EP.

Mothe is a little bit of a departure from my last project, in that my last album was focused on the inner workings of my mind and the way I think about things. But this particular project is focused more on the intersection of nature and the electricity found in all things. I called it Mothe because I just feel like I am in a transitionary period. I've gone through a mental transformation so I wanted it to be symbolized by something that goes through metamorphosis. The only thing that represents that is a butterfly or a moth, but I felt like a moth was better because all of my transitions were happening in near isolation. A butterfly is more of the sugary, happy version of transformation, and I felt like a moth is a somewhat unwanted transformation but it still happens.

From there I just been exploring all my projects and asking myself questions and exploring some of the ideas from the different works I've made. For the EP I recreated myself digitally into a video game character, and musically I was heavily inspired by late 90s and early 2000s video games and the soundtracks to those—like Final Fantasy and Bust a Groove. I was inspired by trip hop.

What were some of those transformations?

I think the more you learn about stuff and the more you're exposed to, the better and the easier it is to define yourself. I'm always self-assessing and deciding which direction to take, and I usually do what I want no matter what but I think in the last year or two I questioned myself more than I would usually. It's really a space of not only just doing what you want to do, but having the full confidence to really go there with it. With this project I felt more comfortable taking risks, where before I would take risks but I wouldn't be comfortable with it.

"[People] want just songs they like, they don't want to go down a whole extensional crisis with you."

It's also coming into your own as a creative. Over the last couple of years I've done a lot of different kinds of projects, not just music, so it's a weird place to be in where people are like, Where's the music? But I'm doing another project. It's being able to understand the fact that I'm a multi-disciplinary artist as opposed to worrying only about music or whether people who enjoy my music are happy with the choices I make.

How do you decide at any given moment where to focus your energy and time and creativity?

It's not easy. Some projects I try out through music—they start as ideas or questions I have and I try to explore them through music, but then sometimes people really don't want that. They want just songs they like, they don't want to go down a whole extensional crisis with you. They just want to listen to the music. But then sometimes I'm conflicted as a creative because I feel like there are so many artists in the world that having that difference is a good thing, and having projects that don't necessarily fit into a box is also a good thing. So I understand and I see life in a lot of different ways, which is where the problem lies sometimes because I can see everyone's point and I can see my own point. It's really whichever philosophy I'm going by that day.

"I don't really want to be a brand within myself, though I know I am to someone else."

I do try to find a way to make conceptual art projects palatable. Some stuff is only going to work in the gallery, and some stuff is going to translate really beautifully live, and some things look cool in a video, and sometimes I just want to make songs and not have it be this art thing. My way of creativity is just experimenting constantly and asking myself questions and it all informs me and helps me to be a better image maker and music maker.

Your mind seems naturally drawn to the bigger questions and the deeper questions. Has it always been that way for you?

I think so. I don't really get caught up in small stuff. It's more like the questions that make me excited to explore are the questions you can't really answer, and have ever changing answers depending on what faze you're at in life. So like, the implication of technology and how we communicate now and closeness between people in a digital era—those are all things I like to explore in my art. The project after this one will be a lot less conceptual, and even with Mothe itself, I didn't really go too heavy with making sure all of the songs were making sense to my concept. It's really a lot more natural only because the concept was bridging the vulnerability of nature with the hardness of technology and electronic music. It really depends on the project. I guess I've always been like that, because I get bored easily and it helps me stay stimulated.

Not at all. The silence can help you create.

Exactly. I like to have the silence to be able to come up with something new. That's why I spend time away from social media, because I'm kind of like a sponge so if i see too much stuff that is similar, it'll make me think, "Wait, did I come up with that idea or did I just see it somewhere?" I kind of have a photographic memory, and I just know when I'm working deeply on a project it's better for me to be in my bubble so that I'm not influenced too prematurely. I don't play anything for anyone until I'm 70% done and I work with a small team of producers. On the creative side I'll only work with one graphic designer and I just like to get really deep into it and share a brain with the person I'm working with at that time. I just try to keep it as tight as possible.

"I just found it gross the way that brands were latching themselves on to actually interesting and cool people and making them look really lame."

I'm just one of those people where I don't have my phone on me all the time. I wake up in the morning and I'll like do emails on the computer, but then I really like don't have my phone around me. I don't really think about it but then sometimes of course you're just bored and looking at Instagram at 11:00 at night, and you're just kind of already in a daze because the day has been long and you're just consuming just so much information, and so I do both. I don't feel as strongly about it anymore. I don't find it as negative as I did before when I was younger. I use it more now just as a tool for the stuff relating to my music. But I think if I didn't make music, or if I wasn't making things that people look at then, I don't think I would have social media. I think I would just have a flip phone.

What felt more negative about it when you were younger?

I guess just my personal experience with, I don't even know what you call it, influencer culture? I just found it gross the way that brands were latching themselves on to actually interesting and cool people and making them look really lame. I think for me, it kind of killed that actual person—the real version of that person. It tainted it a little bit and made it this commodified thing I had a lot of that when I first started, because it was such an influx of that in the beginning. So many little social media things and paid things and all of that and it's like, I understand. I don't knock anyone for doing that kind of stuff or building a brand in whatever way you see fit. But for me, personally, just with the perspective that I had coming into it, I think I'm more of a collaborator and more of like, I just want to create things and I just want the work to be the work and I don't really want to be a brand within myself, though I know I am to someone else.

I just would prefer that the work just speaks for itself. I just didn't want to be like a talking head, you know? Or like, a channel. The pressures of that really prompted the Reflections in Real Time record, and then also a lot of just the fakeness of everything. The irony of how fabricated our whole worlds are sometimes in the entertainment industry. As an art school kid, I want to do everything myself all the time.If I could, I would build all of my own sets. But there's just no time to learn all those random things, and I already learn as much as I can. It's been a growing process for me to learn how to delegate, and learn how to be a manager of other artists that work with me, and a creative director over my own art, than the person doing everything.

You said the transformations you went through were experienced in isolation. What do you mean by that?

Over the past couple of years I spent a lot more time alone than I did when I was living in New York. You go from seeing everyone all the time to living in LA where you don't have to see anyone you know if you don't want to. I don't have to be a part of a scene or a culture and assimilate into that at any point if I don't want to, and it really gives me faith and I learned that for my own project it helped me dive into what's going on within myself. I tend to work more isolated now, but I try to make the purest thing possible and I also try to be still and quiet within myself to make the ideas fall into my body. It sounds really hippy dippy but it's not.

Watch the premiere of "Elegance" from Mothe below: