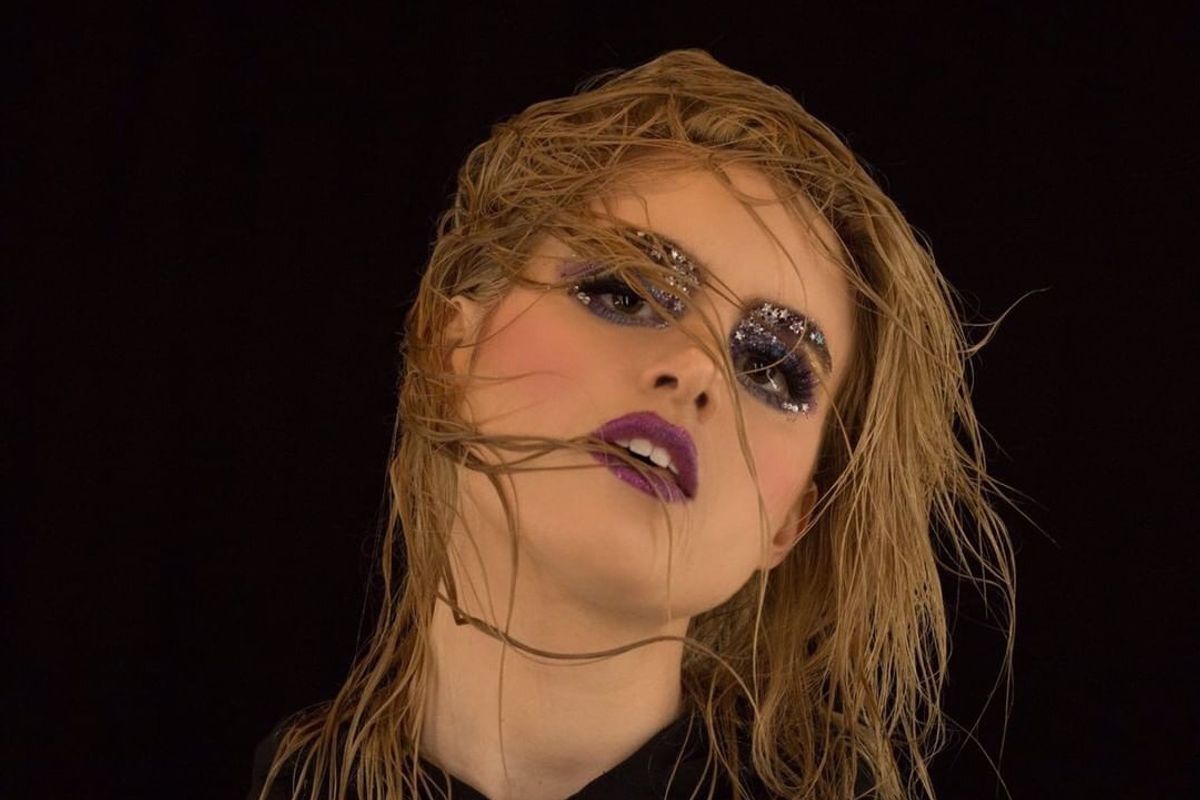 Behind the Scenes of Kiiara's Song of the Summer

Kiiara first emerged seemingly from nowhere back in 2015 with "Gold," a singular slice of distorted electro-pop so addictive, it went viral and quickly became a Top 10 success story.

Kiiara's debut EP, low kii savage soon followed, and while it featured a range of shadowy pop songs, audiences knew less about who the Illinois native was. Her mysterious image and sound worked. But as her career continued to take flight and she became more of a public face, Kiiara worked tirelessly for the next three years to mold a new, more multifaceted pop sound. In recent years, she has collaborated with the likes of Linkin Park, Felix Snow, Ashley All Day, Don Diablo, and, more recently, Teddy Sinclair to release various test singles (from "Messy" to "L*** Is a Bad Word") to a market forever ready for the next Big Pop Hit.

Good things come to those who wait, because with "Open My Mouth," out today, Kiiara has a legitimate frontrunner for song of the summer. The song, a first taste from her upcoming full-length debut, is an infectious, breezy tune with a stuttered, insanely catchy chorus chronicling the singer's hesitance in speaking up, whether in day-to-day life or in relationships. Having co-written "Open My Mouth" with pop heavyweights like Amy Allen and Scott Harris, Kiiara sings vulnerable, sweetly melodic lines like, "I know it's gonna hurt, so I leave out the words/I only make it worse, doesn't make it any better/I know it's all my fault, that we never evolve/Been dodgin' all your calls and I'm dying to surrender."

The song also has a video showcasing a new side to Kiiara. A singer who usually embraces a darker aesthetic, "Open My Mouth," directed by Jules, is poppy and prismatic. During a runway show dripped in Christian Cowan, Kiiara wears the designer's sparkly numbers and bold makeup looks. In later scenes, she takes her walk (in a gorgeous tiered Cowan dress, no less) and destroys the runway, literally pulling up the set and destroying it. It makes an effective allegory to the song, which is a breakthrough for Kiiara, who admits to suffering from anxiety, all around.

Kiiara shares exclusive behind-the-scenes photos with PAPER and talks about how she overcomes self-doubt, what fans can expect from her new album, and why she loves tour life so much.

I'm gonna go ahead and call it: "Open My Mouth" already feels like it's like the song of the summer.

Oh my god, thank you so much. That's crazy.

How does it feel to have written a song of the summer contender already? The summer is not even started yet.

Amazing. l love it. It is super bright and it's really fun.

How did you go about creating it?

I wrote it with a handful of friends [including Amy Allen and Scott Harris] and honestly, I think it was like a year ago. Yeah, so I'm so excited now that's it's finally coming out. It's the first single off my album. I don't know exactly what day or when the album's coming out...

"Vocally, I'm freer than I've ever been...I love surprising myself."

The last I knew you were writing on the new project with Teddy Sinclair. Do you guys still have some songs you're planning for the new album?

I can't say officially yet if they're on the album, but yes, we've been working together. It's been so much fun. She's a queen.

Didn't you just have a birthday?

Yes, it's my golden birthday. I turned 24 on May 24. I still have to celebrate, I didn't even make a wish or anything.

Well, the album's coming this year, right? So you'll have plenty to celebrate then.

Do you have ideas for album titles yet?

No, that's usually the last thing I do. Like, it'll probably come to me the night before final deadline at two in the morning.

I remember "Gold" when it first came out, and how big that song was, then your EP followed shortly after. Now you're about the release your first full-length. What's one of the biggest things you've learned in your journey so far?

I feel like patience is something I've learned. I have been recording for roughly three years, maybe longer. I've learned that I really have to just kind of sit still sometimes and enjoy each day. Also different artists I've worked with always remind me how important it is to be yourself and love it.

Do you believe in the power of manifestation?

I think so. If you put good energy out there then I believe you can get what you want back. Whenever I force myself — not necessarily force myself, but — whenever I change my mindset to be more positive, things just fall into place. And my friends will definitely catch me sometimes. We'll complain to each other about how much something sucks, but then we'll try to turn it around by reminding each other that even challenges can be awesome. I think in order to manifest what you want, it's helpful to have good people around you who hold you accountable.

"In order to manifest what you want, it's helpful to have good people around you who hold you accountable."

"Open My Mouth" is a great new way to begin this album cycle. What other new things are you exploring?

I don't exactly know how to describe it. It's still distinguishable as me. But I've grown a lot in the past three years and I think people will be able to notice that when they listen to it. I think you'll definitely be able to be see growth. I've done shows and have become more comfortable with myself and gone on tour, performing unreleased songs and stuff no one has heard. It'll be really nice to finally share who I am and what I've gone through in the last few years.

Totally. Let's talk about the video. How did you come up with the concept? And the Christian Cowan styling is also so cute! You look great.

Thank you! It was directed by Jules, and I swear I feel like I've known her forever, when we literally just met at the video shoot. She actually came up with the idea of the fashion show, me destroying the flowers in it, and all that. Just because we wanted to really show people what I go through and who I really am, because I have stayed silent for the past three years, because, you know, what the song's about is like every time I say something I fuck shit up, without meaning to. So that's why I've been "angry." So, finally getting to like, you know, let out how I really feel, I've always wanted to destroy stuff, so it was such a release to do that on set.

There's also this tension in the video of being yourself and not getting approval. Like the fashion editors in the front row giving you dirty looks in the video.

What's funny is those are the looks I get all the time whenever I talk or say something really real and honest, they're like, "Uh, did you just that? Really? Let's try to fix this whole situation." I'll make stuff really awkward for other people without even trying to.

But that's the whole thing about speaking your truth, isn't it? There's always the risk of making someone uncomfortable. How have you worked to move past self-doubt?

I really have come to believe that you gotta stay true to yourself. It's better that way because people appreciate you more. My real friends are the ones who have stuck around because they appreciate that I'm so honest and real. To get over being quiet and self-doubt and all that — I still deal with that and a lot of anxiety — so I can't lie, it does gets in the way sometimes. But I've been working with a therapist for about a year.

Therapy makes all the difference.

Totally, it's life-changing. It helps me remind myself to be less afraid. And whatever it is I can't say one-on-one, I can just say in my music. That's why it's such an awesome outlet for me.

"Whatever it is I can't say one-on-one, I can just say in my music."

In the past, musically, you've played with a lot of vocal distortion, and on this track and in songs you've released in the past year, like "Messy" and "1%," your voice is more front and center. Has that vocal clarity been part of this process of speaking your mind more?

For sure. Vocally, I'm freer than I've ever been. During voice lessons, my coach will have be project more out loud. I still get scared, and it'll take about five minutes to get over the fear, and then I project. I definitely have gotten more comfortable and more confident as a singer.

You posted a clip of yourself doing a voice lesson, and your fans were like, "yasss, sing queen."

Yeah, see? I was so scared to post that video, but then I just did it. My followers were like "Wait, what? You can do that? Oh my god," and I'm like yeah, did you see how surprised I was? I looked at my vocal coach and was like, "Did that just happen?" I'm so grateful that he can bring that out of me. It's honestly therapeutic, kind of like how running gives you a release, but this release comes from me singing. I love surprising myself.

What's next for you? I assume you'll be touring around the album. Do you enjoy touring?

I'm definitely going to be touring, but it's too soon to say exactly when. I love being on the road, it's my home. I always ask to extend it a few more days because I don't want it to be over. I get too comfortable and don't want to leave the bus... Like, I don't stay in the hotel. I'll go there to shower and then go back and sit on the bus, and watch Bob's Burgers over coffee, just chilled out. But yeah, so far, my favorite places I've been are Amsterdam and Germany. I can't wait to go back. This time, I really want to sing in Japan. Could you imagine how incredible that would be?