Comedian Ryan Drum is on stage, describing his unfortunate addiction to NBC's Deal or No Deal. It's like "watching a stranger buy a lottery ticket," he quips. Various audience members give appreciatory snorts, a woman sitting alone murmurs "hmm mmm." But Drum admits that he can't resist the show's "three ingredients of American happiness: money, luck, and beautiful women."

Drum is 11 years-old and one of seven performers in the comedy troupe, Kids 'N Comedy, run by Jo Ann Grossman and her husband, Stu Morden. Standup shows take place on Sundays at 1 p.m. at Manhattan's Gotham Comedy Club. There, a slew of comics, ranging from 11 to 17 years old, dissect homework, annoying younger siblings, and Howie Mandel.

Emily Carpenter, also 11, who laughs every time she hears Redd Fox say. "You big dummy," can't stand it when adults throw in "sweetie" to try and defuse nagging. John Cortizo, 17, is baffled by his grandparents' insistence at applauding as each member of his family emerges for breakfast. Kody Bachelor, 14, hates his last name.

Morden and Grossman started the comedy shows 10 years ago at the Knitting Factory, running them as open mikes, until a 12-year-old told an unprintable joke about a plane crash.

"That was the last time we let them go up without auditioning their material first," says Grossman.

The "auditioning" process grew into workshops taught by Morden, an investment real estate broker who attended Stella Adler drama school and claims his Bronx upbringing gave him a sufficient eye for humor, and comedians Darlene Violette and Karen Bergreen. Workshops are 10 weeks long, with a focus on joke-writing performance critiques.

"With the young ones, it's about encouragement," Morden says. " I try to make the stage safe for them. We want them to be funny, but we want them to be clean. Anybody can get up there and tell a fart joke. We want them to talk about their dentists, their aunts and uncles, the vacation they just took with their parents."

And for the most part, their jokes lean towards a type of observational humor that sends rolling belly laughs through younger audience members and pull smirks across their mouths of the parents.

Offstage, they're not the sophisticated ventriloquist dummies of over-zealous stage parents. They're bright, poised, genuine kids. They watch Saturday Night Live when they're allowed to stay up for it, juggle comedy with sports practice or church and bear the burdens of birth order. When asked if her younger sister is also funny, 11-year-old Rachel Kaly responds, "No. She's annoying." Conversely, Drum says while he's mainly a Jerry Seinfeld fan, he's memorized most of the movie Shrek so he can talk to his autistic twin brother who prefers to communicate in lines from the movie.

"It's a place for the quiet kid," Morden says, and not the manic class clown. "The kid who doesn't ask for, or get, a lot of attention and has a strong ego. They're looking at the world very carefully, with an eye toward individuality."

Save for 14-year-old Kyle Cardi-Kinzer. While fiercely well-spoken, he's certainly not quiet (he insists on reciting any requested scene from Anchorman and then proceeds, un-requested, to do a couple more) and relishes his reputation as "the hilarious Jew guy" at school. His greatest class clown moment? The time his math teacher, also the school's football coach, called on him to answer a question and he responded "talk to me, sweetheart."

Despite his overt hamming, Cardi-Kinzer, who appeared on VH-1's Best Week Ever last year as a teen pope, has learned a lot from Morden's constructive criticism.

"He doesn't pull punches, he'll tell you if your joke isn't funny or if it's good. I think Stu, next to my father, is the most important man in my life. He's made me a better person."

While most of these kids see stand-up as an entryway into the acting world, 14-year-old Allejandro Kolleeny says he ultimately wants to be a professional comedian. Perhaps the comic with the tightest grasp on sarcasm, Kolleeny, a wild-mannered sloucher in a Dead Kennedys T-shirt, takes the stage last with a barrage of one-liners. "Solitaire? It might as well be called 'loser cards.'"

He is name-checked by a couple of the group's younger members as "the best," but Kolleeny's realistic. He'll go to college, he carefully notes during our interview, and says he understands the tendency doors have to slam in the seemingly well-positioned faces of aspiring comics. "My parents don't want me to think about it like it's really going to happen," says Kolleeny. But, for the time being, he wants it to. 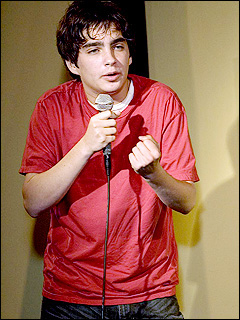 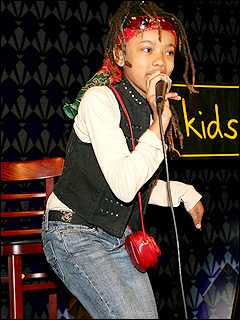 Tony Awards Nominations: Who Deserved Theirs and Who Got Snubbed