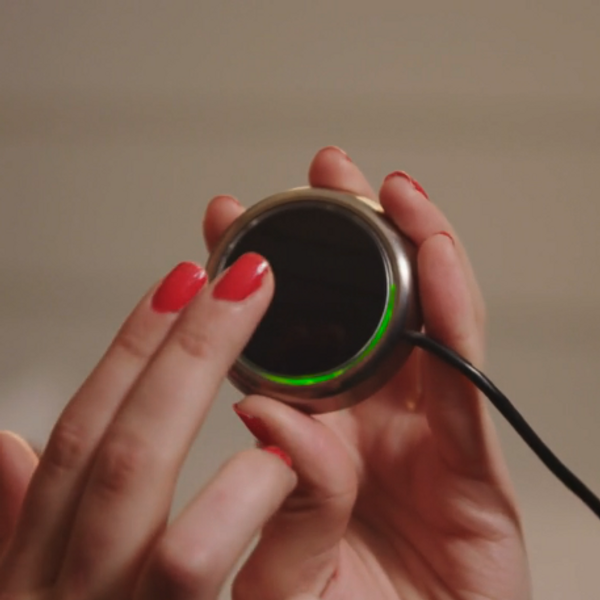 If it was not clear that Tinder has taken our brains and sealed them tightly in a jar, currently deep in the bowels of Kickstarter, a frightening new product called the "LoveSync" button is gestating. The product is specifically to enable all of your worst insecurities and most manipulative tendencies. Allow me to explain.

Brought to our attention via The Intelligencer, LoveSync is a pair of two buttons: one for you and one for your partner, meant to be placed discreetly on either side of a bed.

The twist? Your button will only light up if your partner also has their button switched to DTF. If you press your button, and your partner's isn't on, it stays dark. When both buttons are in fuck-mode at the same time, they'll light up and you may proceed to smash in the faint green glow, smug with your fool-proof safeguard from those three little words: "ehh, not tonight."

Despite this informational graphic, I have so many questions!

First, is this product meant only for long-term, co-habitating couples? It would appear so, given that the instructions say to "place a button at each of your bedsides" (implying demarcated bedsides), and the promotional video features a couple doing laundry together. The woman gets so hot and bothered watching her man fold her panties (OMG, a man who helps around the house, am I right, ladies?) that she slyly taps her button. Surprise! He was over there folding laundry, locked and loaded.

LoveSync's blanket assumption that our relationships are defined by such shaky trust and stunted communication that expressing interest sex is embarrassing is... very 2019. If our relationships really are that toxic (the KickStarter has already raised $4,300 of its $7,500 goal), well, then darn it, LoveSync is here to keep it that way. Why try to cultivate a healthy channel of communication in your relationship, when instead, you could turn your sex life into a nightly round of Tinder?

Depressing reflection of our dating culture aside, LoveSync seems... wildly, fumblingly, virginally awkward? Like, what if you forget to turn your button back to "not down" and there's a non-consensual miscommunication? What if the other person sees you in the act of pressing a button, rendering the anonymity function useless? Who has perfectly located USB ports on both sides of their bed? If this nightmare has to exist, why isn't this an app? Once both buttons are lit up doesn't someone have to say something incredibly awkward, like "oh hey... looks like our lights are on... you ready to bang?"

In all seriousness, the product seems deeply toxic and unhealthy. The buttons are meant to save you from shame, but they unavoidably frame desire as something as deeply shameful, to be hidden and manipulated.

Well, jokes on me, because it turns out the LoveSync is based on Science and Charts:

It's the "only solution!" You can ensure that you and your partner never work through your communication issues for the low price of $44.