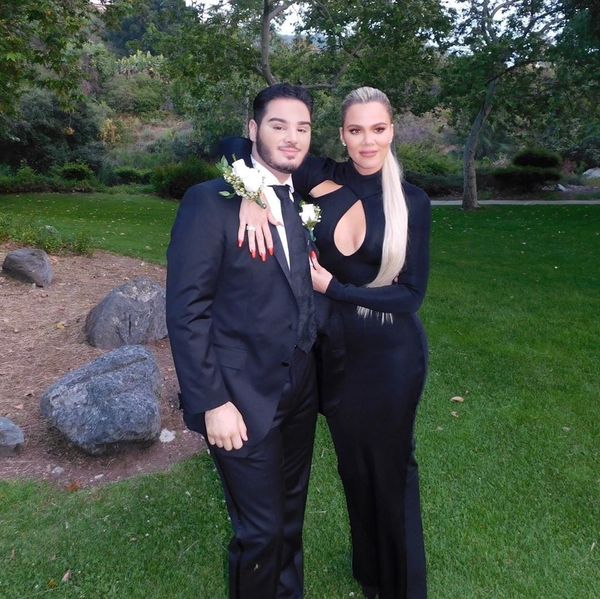 On Saturday night, a Californian teen ticked a highly specific item off his bucket list: taking Khloé Kardashian to prom. Hoover High School student Narbeh runs a popular Kardashian Instagram stan account, and has been in contact with the reality TV family for a number of years now over social media. On Twitter he described Khloé as his "best friend."

It seems like they had a nice time together! Kardashian no doubt upstaged the prom queen in a sophisticated, definitely-not-from-Macy's black fishtail gown, while Narbeh went for a classic tux. Photos on Instagram and Twitter show them posing for classic awkward date photos in a park, then turning up for the main event. They also posed with a teacher, who tweeted that Khloé had "made a dream come true" for her student. I am obsessed with the teens in the background of this photo:

While some speculated that Narbeh's family had paid for Kardashian's appearance at the prom, he hit back on Twitter and denied those claims, calling them "ridiculous." He was also forced to clarify that the event did not have an open bar.

Celebrities often get asked to prom, and it's weirdly not that unusual for them to say yes. Kylie Jenner once went to prom with a fan (she took then-BFF Jordyn Woods along, too), and the likes of Justin Bieber, Drake, Demi Lovato, Selena Gomez, Katy Perry, and Miley Cyrus have done the same. Even Rihanna has done the fan prom thing, as part of the short-lived MTV series Once Upon a Prom.

May we all someday slow dance with the denim entrepreneur of our dreams! Congrats, Narbeh.