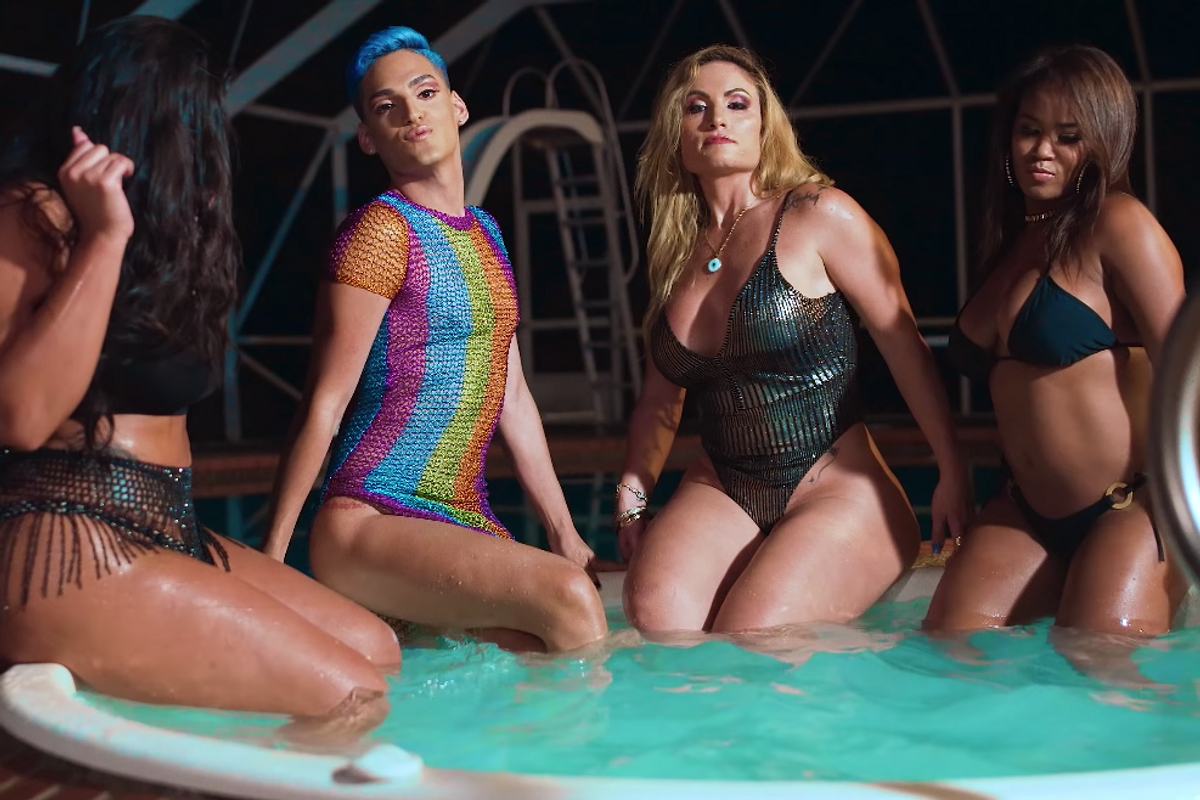 Openly gay Latin trap artist Kevin Fret, who PAPER featured last spring, died Thursday morning in Puerto Rico. The 24-year-old was shot at least twice around dawn, while riding a motorbike through the San Juan neighborhood of Santurce. His attacker had fired multiple times: Eight bullet shells were found at the scene.

Fret, who hailed from the municipality of Carolina, had relocated to Miami years earlier. When he released the video for "Soy Asi" last April, close to 50k fans were following him on Instagram, where he often spoke out against homophobia in the urbano market.

His account has been cleared of posts, but in a video posted to Facebook early in December, Fret jokes about not wanting to be gay — then reminds viewers he'd never stop being himself. He regularly defended that right across all platforms, in interviews, and in his music.

The circumstances surrounding his murder are still being investigated, and Fret's death has not been declared a hate crime at this time. But for the queer community of San Juan, the loss is a reminder of the challenges they face, and the fear with which many live.

"I'm already afraid of navigating the island, and this makes that fear grow exponentially. Right now, so many people are feeling that fear," local artist and performer María José told PAPER last night. "My friend was going to come see me, but she didn't because she was afraid to leave her house."

So far this year, at least 24 people have been murdered in Puerto Rico. It's an alarming number — and it's actually lower than last year's count for the same period. CBS reports that in 2017 the homicide rate in Puerto Rico was higher than any U.S. state, attributing the violence to gangs. But factoring in the island's extreme economic problems is critical here: Crime is a symptom of a poverty, and in Puerto Rico, more than 40 percent of the population is living in poverty.

In the U.S., the LGBTQIA community faces higher rates of poverty and crime. But those numbers are hard to quantify in Puerto Rico, especially in terms of homicides: The police do not separate statistics by population.

Osvaldo Burgos, president of the Comisión de Derechos Civiles and secretary of the Colectivo Orgullo Arcoiris, the Puerto Rico PRIDE organizing nonprofit, said the management of statistics, including in the courts system, is deficient overall. But the lack of analyzation for marginalized groups shows a bigger issue.

"This is part of the discrimination against LGBT communities. Because the information is not segregated, problems are not identified as they are," Burgos said. "Obviously, it's difficult to get funds, identify problems, and determine tendencies. All of that is very difficult to do in this country, and I think it constitutes another form of state violence against the LGBT community."

Discrimination against the LGBTQIA community is also apparent in the online response to Kevin Fret's death: Victim-blaming, religious zealots (when, in fact, Fret was quite religious), and other homophobic attacks are rampant in the comment sections of news outlet posts.

Someone even posted a Duck Hunter GIF, according to María José, alluding to shooting "patos," the word for ducks that's also used a slur against gay men.

"I'm an artist, too. I myself am a fucking performer, I have aspirations of doing music, and urban music, in the future," she added. "Doing that would be exposing myself to a lot of people that want me dead. Or maybe they don't actively want me dead, but they will find humor in my death, maybe, with a comment or a gif on Facebook. It's really discouraging. In Puerto Rico, the stakes are really high. And it's a monumental pressure on everyone."

Sora Ferri is an activist with La Sombrilla Cuir, or the Queer Umbrella, a transfeminist educational platform. She was taken aback by Fret's death — they were the same age. That Fret was at times confrontational (he was arrested last June on aggravated battery charges) points to a coping or survival mechanism often adopted by femmes, she said.

"When you're a high femme, and super effeminate gay, people aren't going to take you seriously, and you have to be kind of on the offensive all the time," she said. "I think a lot about how... when we're out together, with people you trust, in public places that are not for us but we take up space, we're all kind of anxious — all the femmes and all the queers and all the trans girls. So what do we do to make up for it? We get loud and try to laugh and go over the anxiety, enjoying ourselves and dancing and having fun, basically. But then you kind of forget that you might be disturbing the homophobes and straight folks around you. The industry and the society kind of makes femmes have to be like that in the first place, be on the offensive in the first place, all the time."

In a Facebook post yesterday, Sombrilla Cuir's post noted that while not all of Fret's actions were favorable, his contribution to breaking gender norms and battling misogyny and machismo should serve as inspiration to live authentically, and to keep working toward greater space for queer artists.

"You would see him on Instagram being in the studio, in interviews, being in different parts of the world, just being himself and being loud and being femme," Ferri said. "To see someone out in public in the daylight out with people being unapologetically themselves and unapologetically feminine, it made me think that I could also be outside and be myself and dress how I wanted, and not have to worry about how dangerous it is or how many people I'm making uncomfortable."