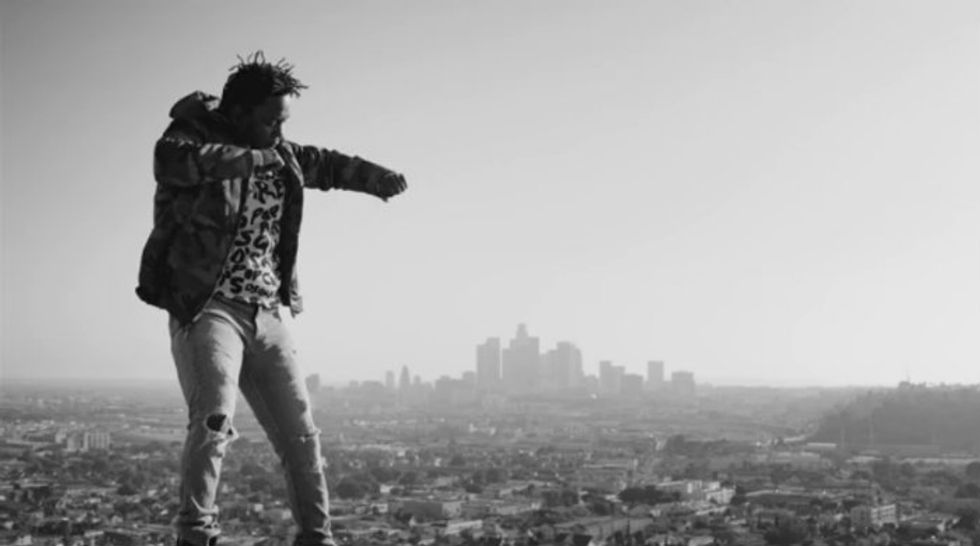 Kendrick Lamar is Defying Gravity in His Confrontational Video for "Alright"

by Eric Thurm
PAPERMAG
Today, Kendrick Lamar continues his 2015 streak of making aggressive, dense art that's difficult to parse at first look (or listen), with the video for To Pimp a Butterfly's "Alright." The video, directed by Colin Lilley and The Little Homies, features many of the themes that have come to characterize Lamar's work this year. There are joyous depictions of black bodies (c.f. "King Kunta"), a fractured consciousness ("u," which is incorporated into the beginning of the video), and a depiction of Lamar himself as a deeply vulnerable superhero, attempting to make himself into a transformative figure while simultaneously unflinchingly acknowledge his flaws ("The Blacker the Berry").

Here, he alternately floats around and raps on a pile of money until a magical bullet from a white cop takes him out with a finger, in a manifestation of the "apartheid" he explicitly criticizes in an extension of the album's refrain. It's predetermined by the lyrics -- "gonna kill us dead in the streets for sure" -- and, like the rest of the record, it's tough to fully grasp initially. Is the video for "Alright" as great as it seems? Decide for yourself below.