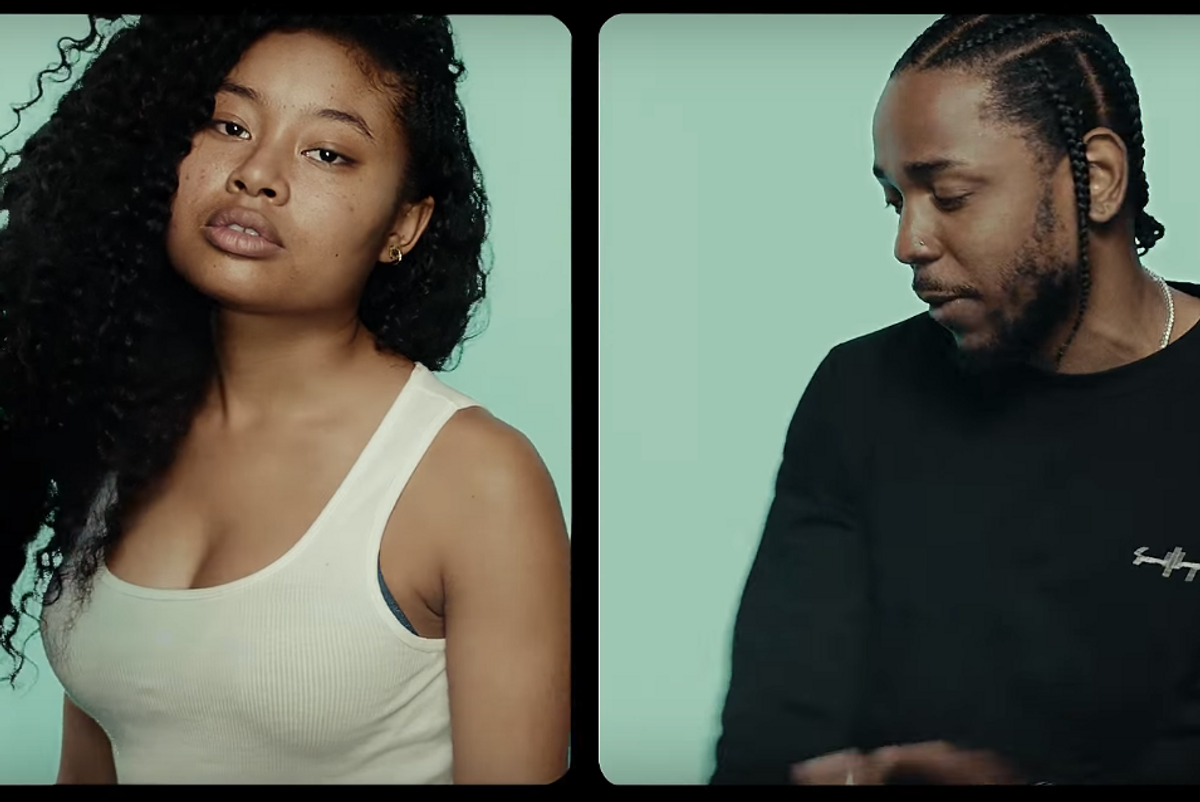 Last night Kendrick shook the internet with his arresting new video for "Humble," a semi-ironic track that intermixes talk about the riches K.Dot has attained through music and the call out to himself and others to stay humble and real, even in a fake world. Religious imagery, including Kendrick dressed as the Pope in one scene and sitting at Jesus' spot at the Last Supper in another, pops up throughout as Lamar tries to make sense of the capitalist world that has taken so much from Kendrick, Kid from Compton, but given even more to Kendrick the Rapper. The gorgeous, eye-popping video is not only the best Kendrick video ever, but the best video of 2017 so far.

While some fans went to work looking for more Big Sean disses, many who fall on the female side of the spectrum took to dissecting the bars - emphasized by the video's imagery - professing Kendrick's noted love for "natural" beauty.

The lines in question are accompanied by visuals of a light-skinned black woman first looking glam and perfectly made up (the Photoshopped version of womanhood) and then transformed into a #nomakeup, natural-haired beauty. Kendrick also nods approvingly at a split screen of a woman's ass with stretchmarks, something rarely seen in any form of media.

Some applauded the lyrics and images, happy that at last women in their natural form are being celebrated by an artist with a platform as wide-reaching as Kendrick's.

But others took issue with the "benevolent sexism" present in the video:

. @kendricklamar I'm a heavy fan so it's disappointing that humble neglects to speak on real struggles of black women, not just our bodies.
— kaila (@kaichare) March 31, 2017

With that being said... Kendrick just dropped the most powerful, important video/single since Formation if we being honest.
— Bad & Hoochie (@BadFatBlackGirl) March 31, 2017

This is something Lamar has been criticized for since his Section.80 days when he irritated female listeners with these lines from "No Makeup":

I know she bout to ask me how she look
I tell her beautiful, and how long it took
For you to put it on, it was early in the morn'
She resembled a model out of a Mac book
Concentrating on the way the eyeliner thickens
I stand behind her and try to figure her vision
Of prettiness, the wittiness, of colors on her skin tone
Her complexion in a direction I've outgrown
Damn girl, why so much?
You bout to blow your cover when you cover up
Don't you know your imperfections
Is a wonderful blessing
From heaven, is where you got it from
I love your smile, you can do it without style
From your lips, all the way to your eyebrows
It's the beauty in her but when the makeup occur
I don't see it, all I see is a blur

It can be hard to see why a call for a bare face is considered sexist or misogynistic (and yes, "No Makeup" has a twist at the end that suggests it's really a song about abuse). Campaigns celebrating "natural beauty" and " real women" have been loudly applauded in our culture as a welcome reprieve from the increasing prevalence of photoshop in the early aughts. However, one could argue that if the goal of feminism is to free women from the chains of patriarchy, allowing them to be equal and independent actors making their own decisions about their own lives, then a male artist telling women how to present themselves (even if naturally) is a step backwards. (Plenty of male musicians fall into this trap, by the way--see Bruno Mars and One Direction--so much so, that Amy Schumer parodied this genre of song.)

In addition, black women's bodies are policed in a way that other women's are not, and the decision to go natural, whether in regards to makeup or hair, can be a political statement as much as a beauty choice. Studies show that negative associations with women's natural - meaning curly, kinky, or otherwise African hair - are still deeply embedded in the American psyche.

As Tomi Obaro argued eloquently over at Buzzfeed in an examination of K. Dot's relationship to women last year, "Who are we to demand that the artists we listen to ascribe to our political ethics, anyway? After all, our Black Male Geniuses are fallible humans with the usual blind spots."

She also adds, though, that "to belittle, berate, condescend, and reduce women to their disparate body parts over and over again is to risk being left behind — both in art and our history."

Ultimately, "Humble" is relatively innocuous in a genre and world that often reduces women to types, and songs like "Sing About Me" from Good Kid, M.A.A.D. City, in which Kendrick puts himself on blast as he raps from the perspective of the sister of the murdered woman from "Keisha's Song," show that he's already lightyears ahead of other artists in grappling with these issues.