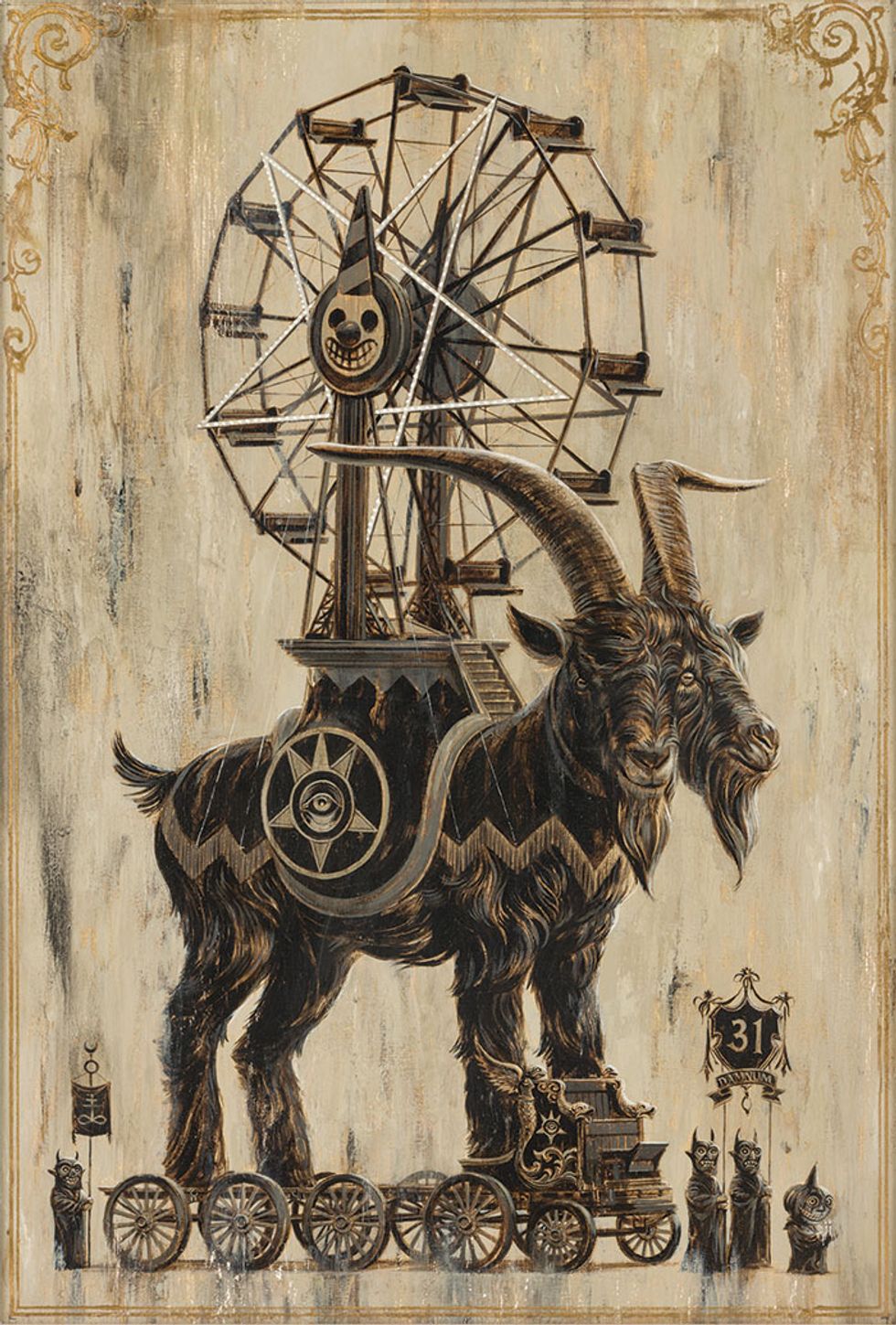 Painting from The Expatriate Parade.

In 2010, the city of Detroit shut down John Dunivant's annual Halloween festival, Theatre Bizarre. For 10 years, the party had drawn crowds in the thousands to a bombed-out section of the city, where Dunivant and his crew had a roller coaster and a full-size Ferris wheel installed, and burnt-down houses were an eerie backdrop for flame-throwing performers. Live music ranged from hardcore punk to folk. "It was probably the most fun I've ever had," says Dunivant, a native Detroiter. "I got to paint and sculpt and design this environment and build a dream I never imagined being able to actually build." Needless to say, none of it was sanctioned. 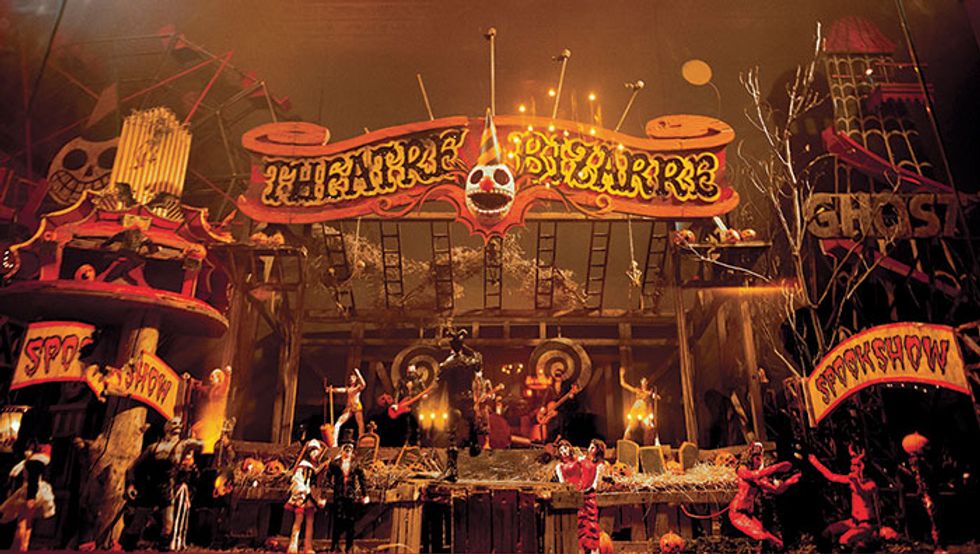 Fortunately, the festival found a fitting new home the following year in Detroit's Masonic Temple. A trained painter, Dunivant, 42, incorporates imagery from the Freemasons and other secret societies, plus his grandmother's Catholic ephemera, the roadside wax museums of his childhood, Grand Guignol stagecraft and Dr. Seuss illustrations into Theatre Bizarre's costumes and sets -- as well as the works on paper he recently exhibited at The Lodge Gallery on Manhattan's Lower East Side. The solo show, The Expatriate Parade, reflects the stress of relocating Theatre Bizarre: masked minions bear the weight of an enormous mustachioed head; white snakes desperately swallow each other's tails. Some of these characters appeared at this year's festival along with the widow of Zombo, who, according to Dunivant, was "killed off when they kicked us out of the grounds." She rode Zombo's coffin in a New Orleans-style procession that Dunivant describes as a "combination of celebration and mourning."

Since the loss of Theatre Bizarre's original grounds, two major grants allowed Dunivant to quit his job as an illustrator and focus on the festival. He still envisions making a permanent theme park, but for now has to work to adapt the needs of his prebuilt environment to the constraints of the 1920s-era temple. "There's no real freight elevator," Dunviant says. "Everything has to be designed modularly. I have to map out the path that every board goes through to get to the room that it ends up in."

(l to r): Statue from The Expatriate Parade; Theatre Bizarre

We caught up with Dunivant again when he was back in Detroit, and with one week to go before the party, his team has found the temple's old barbershop "in beautiful shape." So naturally, Dunivant says, "we'll have dudes doing straight razor shaves, because we thought it'd be fun to do that in a masquerade costume."

Still, the artist looks forward to exhibiting more of his two-dimensional work: "I was always building these things that didn't translate into any sort of gallery, or in hiding, because the stuff was illegal. The party has its own restraints, there's not always freedom to express myself in whatever way," Dunivant explains. "What it still comes down to is, I gotta paint."

Works from The Expatriate Parade and the above diorama will be at Art Basel Miami Beach, 2013.