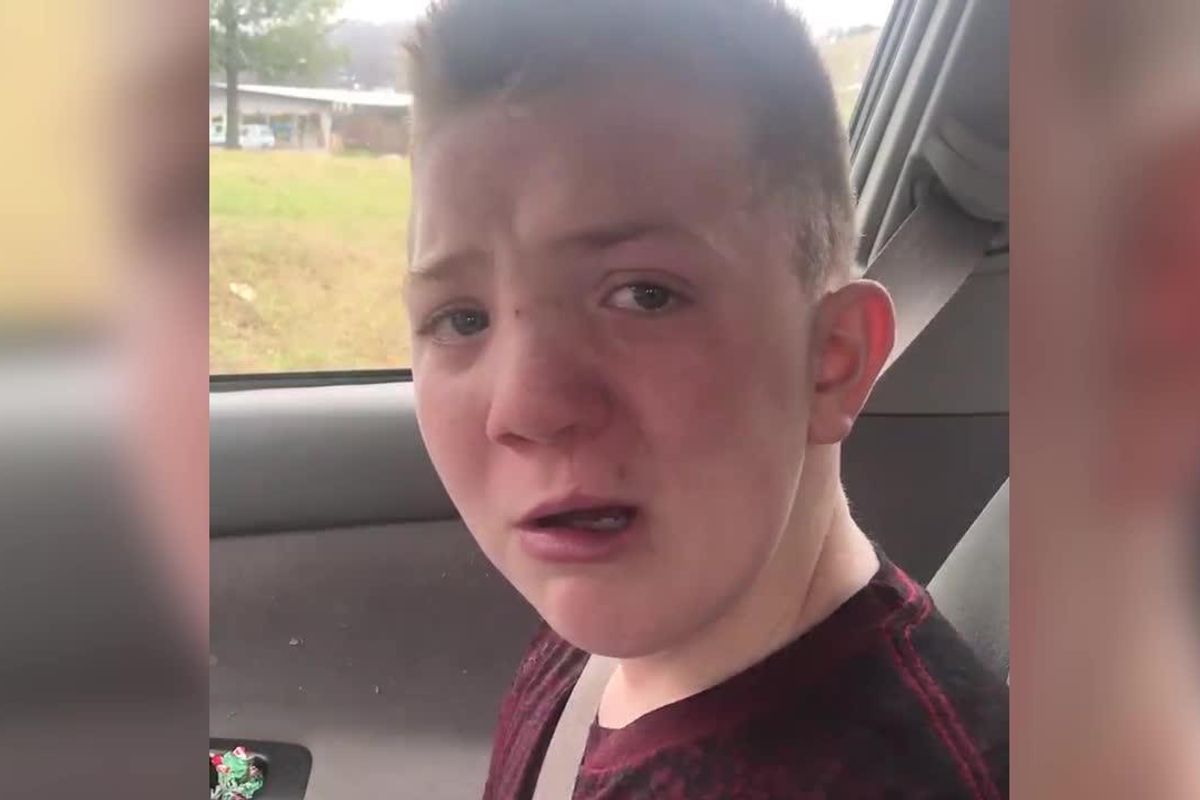 Over the weekend, a Tennessee woman's video of her child, Keaton James, emotionally describing being bullied at school went viral. In the video, Keaton tearfully tells his mother and the camera about how kids at school make fun of his appearance, tell him he has no friends, and throw food at him.

This is Keaton Jones, he lives in Knoxville and he has a little something to say about bullying.pic.twitter.com/coyQxFp33V
— Everything TN (@Everything_TN) December 9, 2017

"Just out of curiosity, why do they bully?" Keaton says. "What's the point of it? Why do they find joy in taking innocent people and finding a way to be mean to them? It's not okay."

The original video had racked up 22 million views, and soon celebrities and professional athletes took notice, lending their support to the bullied child.

Keaton, will you've my guest at the Premiere of #InfinityWar too? I think you are about one of the coolest kids I have ever seen! Can't wait to meet you in person, pal. Forget those ignorant kids. One day, very soon, they are going to feel pretty stupid for this. https://t.co/BqJLxu25GN
— Mark Ruffalo (@MarkRuffalo) December 11, 2017

Please let his mother know that we are trying to reach out. Keaton has some friends on the football team that would love to spend some time with him. https://t.co/tj1ZqDM4KD
— Jarrett Guarantano✞ (@BroadwayJay2) December 9, 2017

@DonteStallworth @Lakyn_Jones hopefully my video and the tweets that Keaton have been getting brings awareness to bullying and how serious it is in our school system pic.twitter.com/1Dujv3RxA5
— Delanie walker (@delaniewalker82) December 9, 2017

Keaton, this is so accurate. Why do people do this? I think your sooo cool Keaton! I wanna be your friend ( but srsly) ur freakin awesome ❤️ https://t.co/LD7Q762bL9
— Millie Bobby Brown (@milliebbrown) December 9, 2017

A GoFundMe page called "Stand Up For Keaton" had already pulled in nearly $60,000 in donations, but the man who started it has since put it on hold. Complicating the saccharine sweet story of a bullied child gaining the public's valiant support is the resurfacing of photos of his family holding up Confederate flags and a Facebook post by his mother, Kimberly Jones, published two weeks after Charlottesville in which she tells people to "stop crying" about racism and slavery, TMZ reports.

Concerned with the amount of people sharing the video of #keatonjones, without doing some digging on the internet themselves. I would NEVER condone any form of violence or bullying of any child. But all is not as it appears to be at first glance. pic.twitter.com/IMIoH5KZfN
— Munroe Bergdorf (@MunroeBergdorf) December 11, 2017

In these situations it is important to always look deeper than the surface, rather than jumping on the bandwagon. It seems that Keaton's mother is a proud white supremacist who has been posting racist vitriol on Facebook for some time now.
— Munroe Bergdorf (@MunroeBergdorf) December 11, 2017

Including a post after Charlottesville telling people to "stop crying". Children are like sponges, they absorb their direct surroundings. Allegedly Keaton Jones called a number of his classmates 'niggers' resulting in him getting beaten up.
— Munroe Bergdorf (@MunroeBergdorf) December 11, 2017

Again I stress that this doesn't make it ok, we just need to look a bit deeper than sharing a video that your favourite celebrity told you to get behind...
— Munroe Bergdorf (@MunroeBergdorf) December 11, 2017

*** Please excuse the language *** This is a conversation between pro boxer @JoeSchilling187 and #keatonjones' mother... "What happened to us whites sticking together and helping one an other against the predator". Racism knows no bounds. Always check before you post it guys. pic.twitter.com/2xDHQorQcn
— Munroe Bergdorf (@MunroeBergdorf) December 11, 2017

As an alternative, people have started pointing to the stories of other children who've killed themselves after being bullied in school as places people can send their good intentions (and money). The story of Ashawnty Davis, a Colorado fifth grader who hung herself after classmates shared a video of her in a fight on the social media app Musical.ly, has gained more traction as a result:

Where was the public outcry for the death of Ashawnty Davis? This 10 year old hung herself in her closet after being relentlessly bullied. Let's change the conversation and show support for the family of Ashawnty. RIP babygirl. pic.twitter.com/LdV0xwx9Yz
— Munroe Bergdorf (@MunroeBergdorf) December 11, 2017

I have found a GoFundMe for Ashawnty's family. If everyone following me donates £1 or $1 we can raise close to £50,000. Please give what you can. https://t.co/rJSwOdlAJi
— Munroe Bergdorf (@MunroeBergdorf) December 11, 2017

Rihanna also shared the story of California middle schooler Rosalie Avila who also took her own life last week after being bullied by classmates.

This is a good-hearted idea. It's awful how this story didn't get traction and Keaton's did. And how murky Keaton's situation is. And I still feel compassion for him. It's all awful. Thanks for being consistent, 2017! https://t.co/AAUwKplBlD
— Patton Oswalt (@pattonoswalt) December 11, 2017