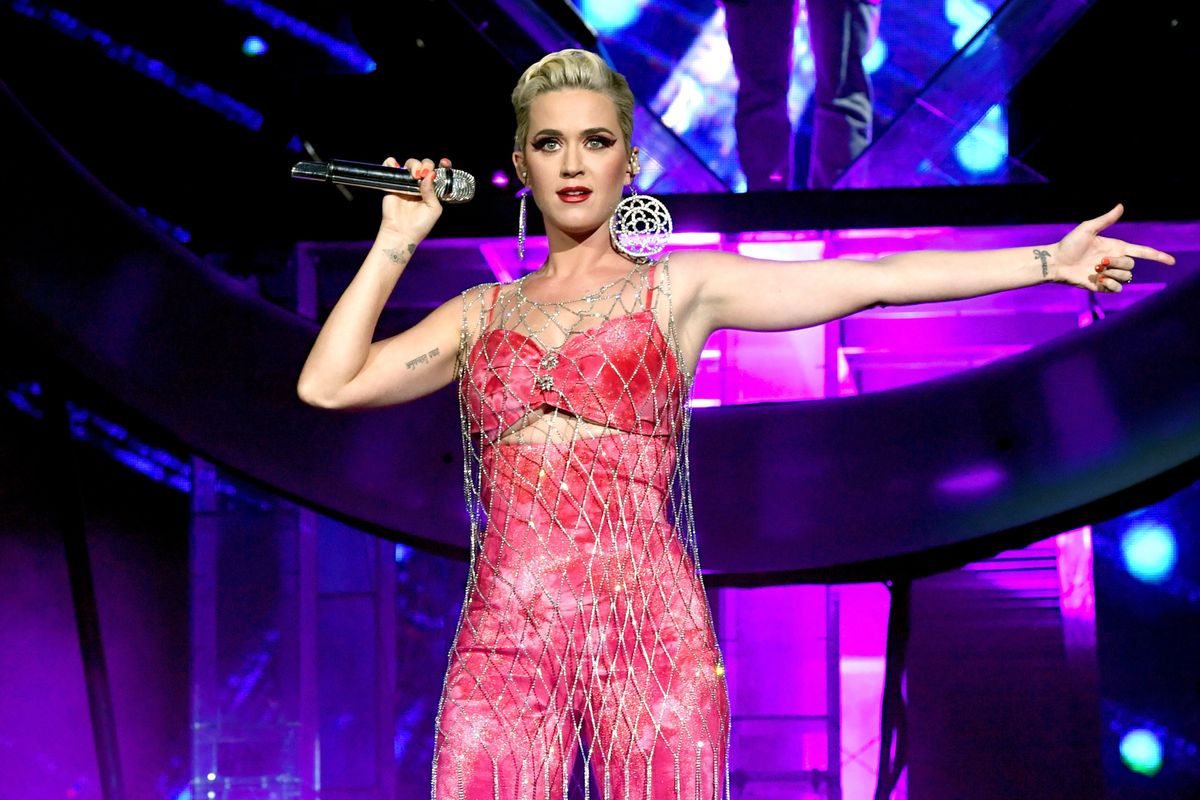 A Californian jury has sided with Missouri musician Flame in a legal battle over Katy Perry's 2013 hit "Dark Horse," the wildly successful Prism single which featured Juicy J and was produced by Dr. Luke, Max Martin, and Cirkut. Katy Cats everywhere are outraged!

In court this past week, Flame alleged Perry and her fellow songwriters had stolen the "Dark Horse" beat from his 2008 Grammy-nominated track "Joyful Noise." Flame originally brought the lawsuit way back in 2014, saying that "the devoutly religious message of 'Joyful Noise' has been irreparably tarnished by its association with the witchcraft, paganism, black magic, and Illuminati imagery evoked by the same music in 'Dark Horse.'" Now he'll be awarded damages in the presumable millions — bear in mind that "Dark Horse" was the second-best selling single of 2014 globally.

Appearing before the judge, Perry was reportedly "calm" and wearing a mint green suit. She also offered to sing "Dark Horse" in front of the jury when the court room sound system stopped working unexpectedly. Sadly, this wasn't enough to endear her to them. Here's what else you need to know about the case.

Flame, AKA Marcus Tyrone Gray, is a 37-year-old rapper from St. Louis who has released nine studio albums on his independent Christian hip-hop label, Clear Sight Records. His 2008 album Our World: Redeemed, which contained the track "Joyful Noise," was nominated for a Grammy Award for Best Rock or Rap Gospel Album.

Who is Katy Perry?

Wait, but don’t all pop songs sound the same?

Yeah, kinda! Pop, short for popular, is obviously ruled by trends. And those trends are usually appropriated from either the past (as with Robin Thicke and Pharrell versus Marvin Gaye's estate), or the underground (as with any song in the Billboard Top 40 right now and southern trap music). Either way, artists borrow from other artists, and the practice is so pervasive that it probably isn't particularly conscious, most of the time.

But that's not to say it doesn't sting. Remember the chaos when Princess Nokia claimed the trap beat from Ariana Grande's "7 Rings" ripped off her 2017 track "Mine"? (Nokia also argued that Grande stole lyrics, specifically around wigs and hair.) The case was trialed by Twitter, not jury, but many Arianators pointed out that versions of the "7 Rings" beat are pervasive throughout hip-hop and R&B — you can hear it in Soulja Boy's "Pretty Boy Swag," too.

That's essentially what Dr. Luke and Perry's legal reps argued this past week: that everyone's remixing the same basic concepts to create something new. Or... new-ish. Perry's lawyer said Flame was unfairly "trying to own basic building blocks of music, the alphabet of music that should be available to everyone."

So how did Flame win the case?

The rapper's legal strategy was pretty simple: insist that Perry and her producers had surely heard the niche 2008 Christian hip hop hit "Joyful Noise," released five years before "Dark Horse," and directly copied its backing track then slowed down the BPM to cover themselves.

Flame's lawyer was able to convince a jury of his song's relative popularity by citing streaming statistics and a Grammy nomination; Perry and Luke continued to insist they'd never heard of it. (They supposedly came up with "Dark Horse" in a matter of minutes, while "drinking wine in Santa Barbara.")

What are other musicians saying?

Perhaps fearing what future legal battles lie in store now that this precedent has been set, many musicians (as well as, weirdly, Fox & Friends hosts) are taking Perry's side. It's a common thought that a jury is ill-equipped to decide music copyright cases, and that the matter should have been settled by someone with insider industry knowledge.

This is an injustice and it’s unfair that a jury of people who most likely aren’t familiar with the music industry,… https://t.co/YNikfEUF2S
— JHart (@JHart)1564452584.0

Are there any nuns involved?

Katy Perry, herself the daughter of two Pentecostal ministers, is famously involved in another Christianity-adjacent legal battle: against a convent of nuns, one of whom literally died in the middle of a court testimony earlier this year. This case is completely unrelated to that one, but one has to wonder what will happen if our favorite Idol judge continues to test the Lord like this.

Damages for the case, payable by Perry, Dr. Luke, Max Martin, Juicy J, and a handful of others involved in the production of "Dark Horse," will be decided today. Considering the success of "Dark Horse," a No. 1 hit, they could be hefty. But rest assured the literal richest woman in music has it covered. Especially as all this controversy has caused her song to re-enter the charts.

Update: The jury has ruled that Perry and her label owe $2.78 million to Flame and his two co-writers for plagiarizing "Joyful Noise." Perry must personally pay $550,000 of that sum.