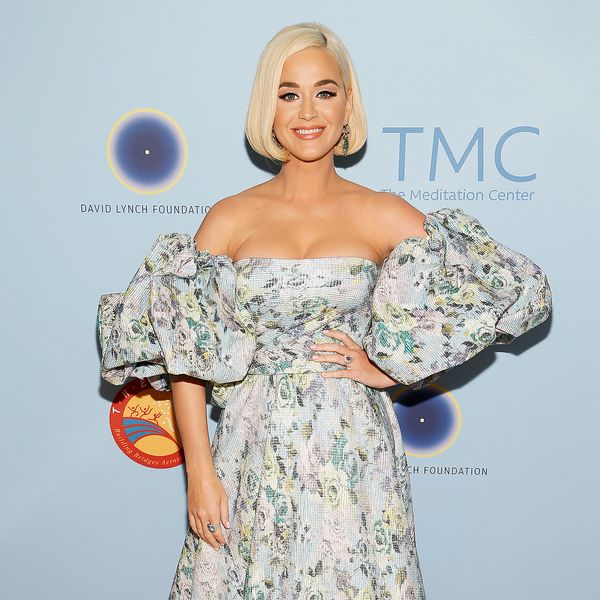 Pop queen, actress, and American Idol judge, Katy Perry has announced her next single: "Harleys In Hawaii" is due October 16.

The single art sees Perry posing on a motorcycle among tropical palm fronds, suited up in a colorful, '60s floral and animal print bodysuit, plus a matching helmet.

There's a lot going on! Let's break down everything Katy's serving. Biker chick? Check, typical enough fodder for pop music videos. But, make it Mad Men-era style, with a Betty Draper beauty look plus zebra stripper heels? Katy — newly long-locked again after nearly a year with her iconic pixie — has been playing with '60s mod theme since she dropped her break-up bop "Small Talk," but this single art takes everything to a whole new level of surreal, campy nostalgia. Then take all of that, and drop it all in Hawaii. Her mind!

While she didn't explain her pastiche of themes, Perry did share on the Zach Sang Show that the inspiration for "Harleys In Hawaii" is a fond memory of her and husband Orlando Bloom's time in Hawaii, while she was there shooting American Idol.

"We rented a Harley because we were just there for a few days... You know, be on the back of a motorcycle in Hawaii and just let the air flow on your face. It's so beautiful. It was awesome!" Perry said. "But I can remember specifically where I was, the street corner I was at in Oahu and turning that corner and whispering to Orlando, going "I'm going to write a song called 'Harleys In Hawaii.'"

Hopefully, Orlando will feature in the video and we'll get to see the happy couple relive their romantic getaway.

"Harleys In Hawaii" follows Katy's twin summer singles: "Never Really Over" and "Small Talk." It's so so far unclear if the the trio of songs are leading up to KP5, which will follow 2017's Witness.

Since neither aforementioned single made much impact on the charts, Katycats are campaigning for "Harleys in Hawaii" to be their queen's next No. 1.