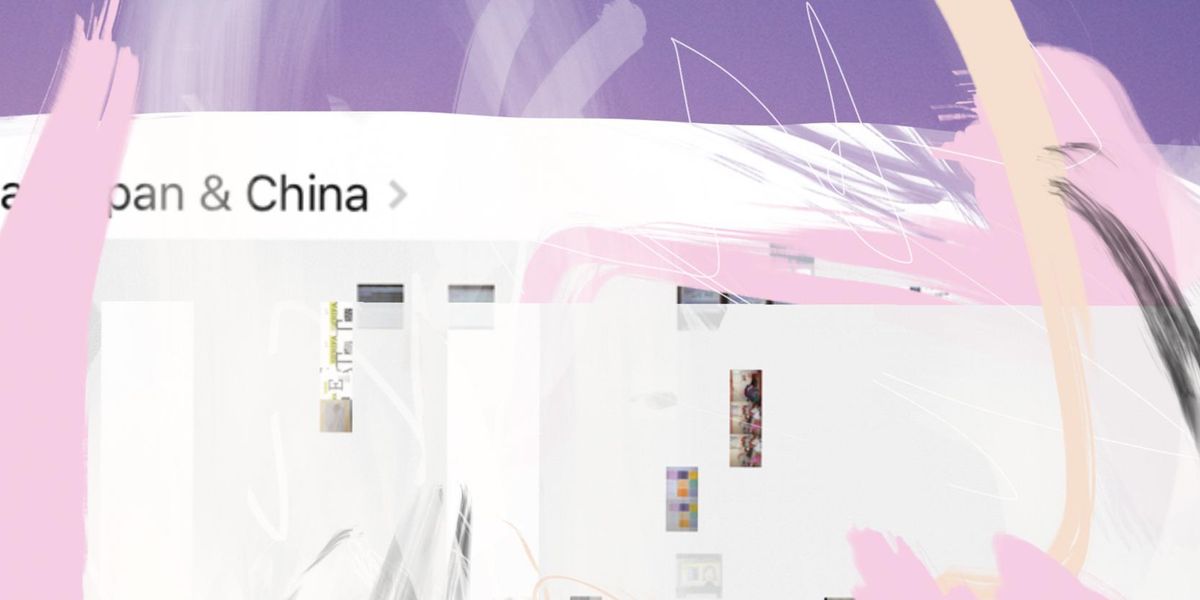 Katherine Frazer is an artist and designer exploring the social implications of consumer technology, working primarily in digital collage and painting.

Over the past four years, Frazer has amassed over 17,000 photos on her hard drive, which were either uploaded from her iPhone or captured as screenshots from the web. The collection represents trigger moments when she felt compelled to reach for her iPhone or copy the screen, often documenting her surroundings before she had time to process them. Later, when she was alone, she scrolled through the images on her iPad and layered them with colorful brush strokes in a painting application.

These works are composed between her iPad and her computer, a practice that allows her to create fluidly with gesture and also the trackpad. In this effort, she becomes increasingly present with her subject matter and can formalize the image until it becomes a representation of not only her perspective, but also her emotional state.

Float Matrix is a series of digital paintings that have gone through this system and emerged as visceral explorations of impulse, attention, and subconscious memory. NewHive's Curatorial Director, Lindsay Howard, spoke with Frazer about this new collection.

Do you find unexpected relationships between the images when you're manipulating them? Has this process lead to realizations about the original subject?

I don't usually have expectations when I make art. I try to forget about the original context of the image, and remove the subject from any identifying environment. By combining different elements I am able to create new relationships outside of representational boundaries. I don't consider the context of the initial image when I'm making these compositions. I discover the subject's meaning through the process of having an experience, flattening it, and then extruding it back into a controlled form.

Do you feel more present when you're taking the photograph, or when you go back to edit it later?

My interactions with digital devices are more significant than those that take place in the physical realm. The information stored on them is omnipresent, lightweight and malleable. I feel limited by my body and the routine it imposes; there's not much freedom to change the boundaries I operate within.

People see the physical body and assign social roles and standards that I have no control over, so through this process, I create an alternative narrative where I define the criteria for perception. It's reassuring to be able to dissect my observations, and create something new that's comfortable for me. I don't want to participate in spaces that are externally controlled – I want to share when it's my decision.

Why edit the images simultaneously across multiple devices? What does that fluidity add to the work?

I couldn't create these pieces in an analog context because it would be disingenuous. My relationship with my computer is special; it contains my most personal information. When I interface with it, both cognitively and physically, it feels as substantial as my human relationships. It's almost spiritual. I'm drawn to creating landscapes because I allude to other environments that are grounded in this reality, but aren't dictated by its rules. In that way, the devices can act as guides, or facilitators between these two spaces.

Since the end result is abstraction, why does it matter if the source material comes from your personal archive?

By limiting my source material to only personal content, I become increasingly aware of the emotions attached to the images. Over time, I have censored images that cause me pain or discomfort, or chapters of my life that I feel like I am done with. I have probably closer to 50,000 photographs from the past 12 years, but the rest are stored within about 8 terabytes of data on hard drives strewn across my bedroom.

The relationship between files and their physical manifestation is a direct representation of their lifespan: if it exists only in the physical and then it's dead to me. In the digital, the file maintains its life and has hope of extending itself into the future. I feel guilty if I don't collect this data because it's part of my chronology, and serves as objective evidence of my existence, regardless of my emotional associations.

Repeatedly viewing and drawing from my photos becomes a curatorial process. When I scroll through my photos, I'm inclined to delete and hide some of them, which narrows the selection. By the time I'm creating a painting, I have refined the collection to such a degree that whatever's left becomes my material.

I want to develop a visual vocabulary based off these components. Like any other language, pieces of it will become dated and others develop over time. By abstracting a system that's derived from representation, I push the content to transcend any particular context. I think humans inherently want to abstract information; each iteration of technological (informational) development feels more considered and pure than the last. Each technological progression removes another layer of physicality; like how printed books went from audio tapes, to ephemeral content on the internet. It's natural to employ the same technique with my personal data. By stripping away extraneous information from my personal chronology, I feel closer to my true essence. I can reverse engineer elements of my past in order to gain insight into my current intentions.

What kinds of objects and experiences make you impulsively take out your phone? Is there anything you wouldn't want to photograph, or use as material for a composition?

I am initially attracted to the formal elements of an image. I like photography because it simplifies three-dimensional space and flattens it into a two-dimensional plane. From there, I use digital tools to remove any remaining context so I'm left with fragments that can be calibrated into new forms. With that in mind, I tend to use photographs that will make good building blocks. I look for images that emphasize texture, color, and repetition. I have about 300 photographs of sidewalk textures, for example. I tend to avoid imagery of humans because it feels forced in this introspective process.


Do the photographs have emotional significance on their own, or only through manipulation?

I think any photograph has inherent meaning because they're an act of labor. There's a slow friction that occurs between experience and documentation – you have to take out your phone, open up the camera app, compose an image, and snap it. It's a deliberate process.