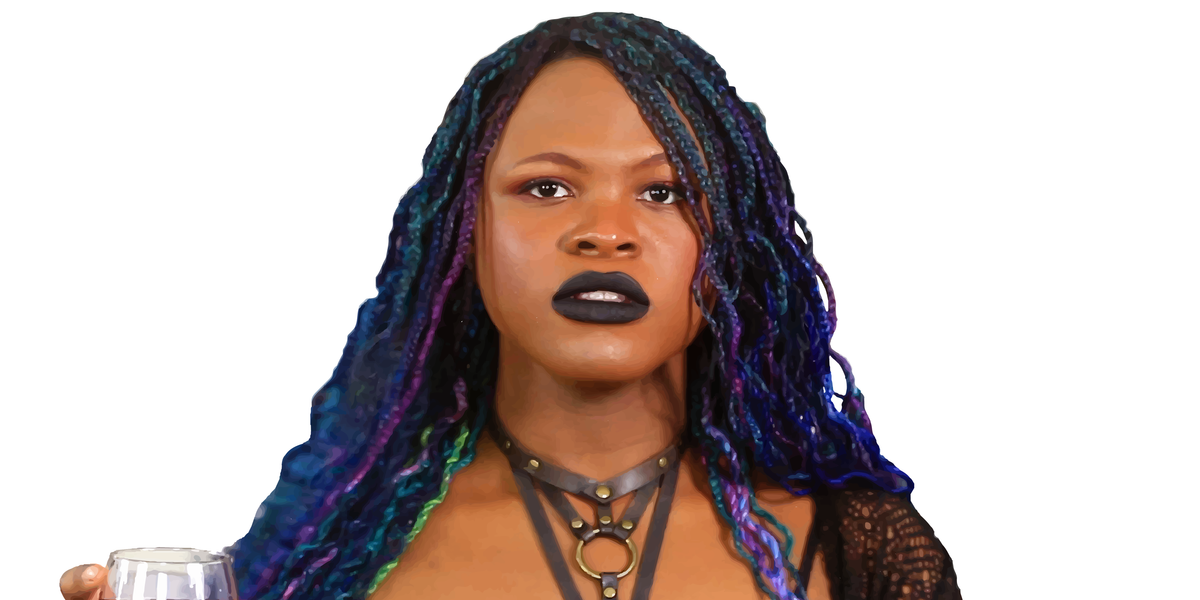 Kat Blaque Doesn't Give a Fuck

Kat Blaque has spent almost half her life on YouTube — and the biggest takeaway she's gotten from countless years of trolling, harassment, and hate? That it's, frankly, no longer worth giving a fuck.

At 28 years old, Blaque has been making vlogs since she was 15 — pioneering the sort of socially-conscious discussions that have since taken over social media. Because while she may have began by making videos about her transition, these videos slowly gave way to discussions about feminism, trans issues, and racism — the everyday issues that affected her — and it's those topics that continue to make up the core of what she talks about.

After all, Blaque is well aware of the way she embodies an intersection of a myriad of pertinent social issues — how her mere existence has become a polarizing, hot-button issue, especially amongst an emerging crowd of transphobes, meninists, and white supremacists. However, she also maintains her power in the sense that she doesn't let the bigots dictate what she chooses to talk about or what content she puts out. Instead, she's eager to continue making vlogs that fulfill her desire to be heard and scene — which includes her perspective on what's happening within YouTube as a platform.

Currently though, she's in the process of rebranding her channel, so that rather than "packaging these issues in a way I think people would understand," she can share a more multifacted, "mature perspective" on issues related to intersectional feminism and existing as a transwoman.

That said, it's also a decision partially spurred by the fact that Blaque's tired of "trying to cultivate a respectable image" — one rooted in presenting "a likeable, agreeable image" that wasn't "pushy or different," mostly so people would take what she had to say seriously.

"What I'm trying to do now is be less invested in appealing to that because, at the end of the day, I need to accept that a lot of people won't listen," Blaque says. "What's clear to me — as someone who's framed myself in a very positive, 'let's talk about this,' kind of way — is that it's still misrepresented. Clearly, that's not going to work, so maybe we should just talk about these things in the way we're supposed to talk about them, rather than me trying to pretty it up."

That said, Blaque also admits that her previous approach was likely also something tangentially related to her desire to be "stealth" — or the ability to pass in everyday life.

However, given the fact that no one really seems to actually hear her nuanced perspective on the heavily-researched topics tackled via her YouTube channel — such as the rise of white nationalism, the prevalence of white voices in leftist spaces, the culture shifts facilitated by the #MeToo movement — Blaque feels like catering to a nebulous audience that "doesn't even listen or watch" is less of a priority now.

"It's so frustrating, because I spend so much time being so painfully considerate, even with things I shouldn't be," she laments, pointing toward a video about a video she once made about a Louisiana bill that would allow police officers to be prosecuted under hate crime legislation.

"The video is borderline cop apologism, but if you read the comments it's like, 'She hates the police. This video is inciting violence against cops,'" Blaque explains. "And all because I'm a Black girl. It's this disconnect."

Like many other Black women, Blaque's noticed that pre-existing notions of her have dominated the conversation surrounding her public persona. Rather than actually taking the time to watch her content, many people tend to "misread" what she puts out as "anti-white," "heterophobic," or "cis-hating" — an unfortunate phenomenon perpetuated by other YouTubers who make their views off of "response" videos that strip Blaque's original work of its nuance and context.

Unfortunately, it's also a problem that's made its way into her personal life, as Blaque was in a public "spent a lot of time defending" a previous relationship with a partner who was mixed, but white-passing.

"I don't want to have to explain why I'm with someone who loves me. I don't owe anyone an explanation for that, at all," Blaque recalls. "But a lot of people were like, 'Oh, you're criticizing white supremacy, but you're dating a white man?"

The double standard against her is also something she says was recently illuminated by the popularity of her "Why Is LeftTube So White?" discussion — a video that was shared by several white, leftist YouTubers and, subsequently, led to an influx of comments from people who wrote things like, "'Wow, I can't believe I let people tell me who you were.'"

"People are so eager to dismiss me, especially since there's this ecosystem of people who make videos that are literally like, 'Kat Blaque Is A Racist,' who are white men," she says. "And people believe them and don't even watch my videos."

Not only that, but she's also noticed an uptick in videos by white creators that "say the same exact thing" as her.

"It's like, 'Oh wow, they listen to this person? But I'm just relegated to being this person who hates white people?" Blaque says. "People are more willing to listen to lies about me as a person than they are to actually engage with my work."

Using her educational video about the history of Blackface as an example, Blaque says that even though the "actual script was really pleasant," it was met with substantial backlash — something she hypothesizes is due to the fact that as a "Black woman speaking about something that is specific to me, people don't believe it."

"When I talk about racism it's like, 'Oh, she's personally affected. I can't trust her,'" Blaque says. "But a white person has 'objectivity,' so they can objectively speak about racism, whereas I'm the 'emotional' one" — a notion that, in and of itself, is racist.

"I wonder at times why [some of my content] hasn't landed," she continues. "But a lot of people will only believe racism is a thing when it's said to them by a white person, and it's one of those hard pills for me to swallow, personally."

And while she's "super happy" to see people having these important conversations, it's also something that's made it all the more evident to her that "YouTube is just for white consumption."

"I've always been confused about why we do these weird live stream videos with white nationalists. Like, why are we so invested in debating these people and giving them a platform?" she asks. "But I recognize now that I feel that way, because it's not for me. I don't need to listen to a leftist debate a white nationalist when I already know racism is fucked up."

That said, it isn't all doom and gloom. After all, as Blaque puts it, "I think a lot about what would happen if our government shifted in a way where they really didn't want certain people to express themselves, so if people have something helpful to say, I think they should do it."

Noting that "we have no idea where media is going to go," Blaque also adds that aspiring QTPOC creators are more important to discourse now than ever before. The only advice she has though? Start a Patreon, diversify those streams of income, and just keep speaking — no matter who comes for you.