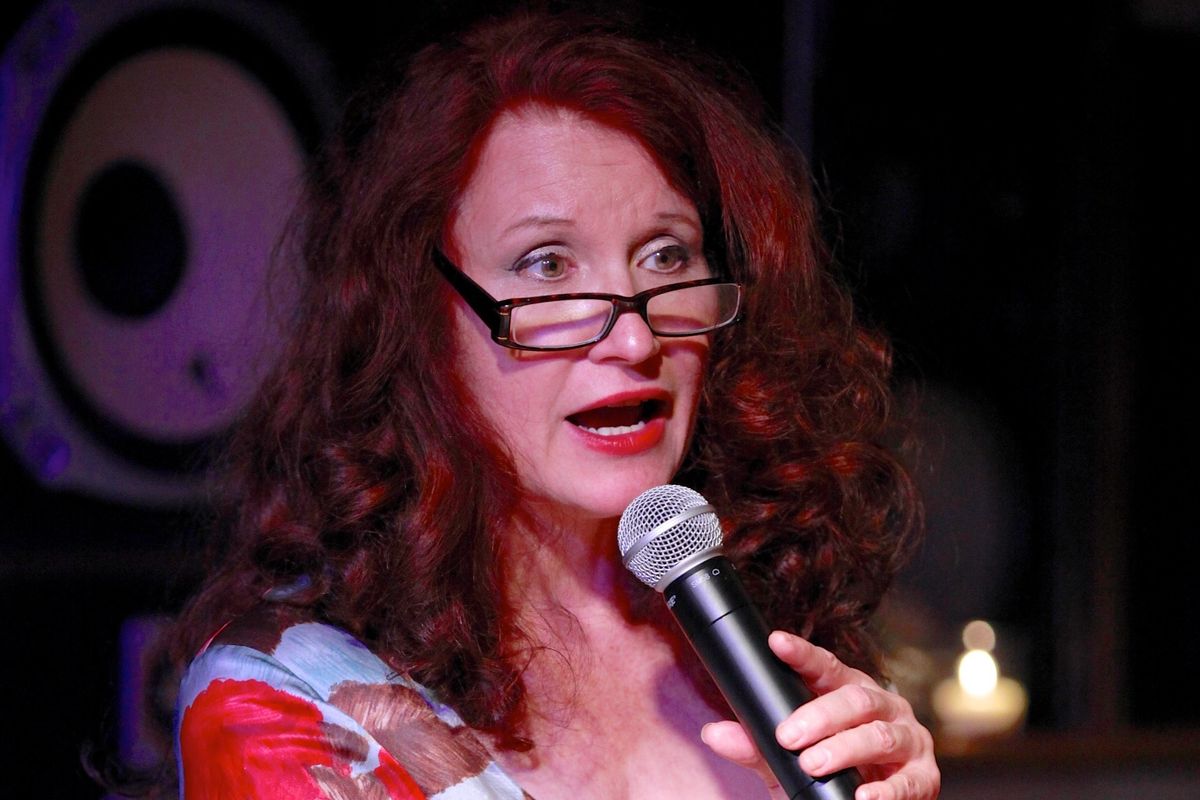 The artist's politically charged writing and performances have brought her both admiration and notoriety since the early 1980s. Her ninth and most recent book, Grabbing Pussy, is an outrage-driven, anger-filled, yet often satirical examination of the psychosexual obsessions of men in power. Bill Clinton, Anthony Weiner, Harvey Weinstein and, of course, President Donald Trump all get the Finley treatment.

Finley and I met at Tisch where she's a professor of arts politics to speak about Grabbing Pussy, which addresses sexual assault, as the title suggests. "Underneath, it's about assault towards women."

The work on Grabbing Pussy began with Finley interpreting and questioning the roller-coaster political climate fueled by the 2016 presidential election, notably Donald Trump, his supporters and the media's sexist treatment of Hillary Clinton throughout the presidential campaign.

Parts of the text are based on a performance piece, "Unicorn Gratitude Mystery," which Finley debuted in New York City in 2016 and later performed an expanded version of the following year.

In the performance, a costumed Finley transform from a unicorn to Hillary to Trump. Her final form was a conglomerate of the three, complete with a blue dress to symbolize the Monica Lewinsky scandal.

Through poetry and prose and an array of perspectives, Finley's writing becomes activist. "To be contributing to writing, contributing to language — I consider those to be political acts," said Finley. "I am a social critic, and that's what my art is responsive to. I'm thinking of a problem or a concept first, that then I'm going to solve."

While weighty, Finley's work does not lack humor. The content in Grabbing Pussy ranges from four-and-a-half pages of slang words for "penis" in expressive fonts to a word-search activity titled "Find Bill's Ladies." She also includes a letter addressed to Trump from his "supporters," thanking him for guaranteeing that "there's no problem" with his "hand size."

The recent accusations of sexual assault against now-Supreme Court Justice Brett Kavanaugh by Dr. Christine Blasey Ford and the public's ambivalent response tie in with the book's criticism of the ability of men in power to avoid repercussions for alleged sexual assaults.

The book is not an outlier among Finley's creative catalog: her most harrowing works deal with the abuse, objectification and maltreatment of women. Since earning her MFA in performance from the San Francisco Art Institute in the early '80s, her endeavors have included writing, music, movies, theater and performance art that address misogyny in our culture.

Finley, already controversial for her use of nudity, explicit monologues and stunts like putting yams in her butt on stage, gained mainstream recognition in 1990 for her performance,"We Keep Our Victims Ready."

At the end of this performance, which dealt with rape, incest and abortion, Finley stripped naked and smeared chocolate sauce all over her body to symbolize women being treated like shit.

Backlash ensued. In an operation spearheaded by Republican senator Jesse Helms, who called Finley's work "offensive," Congress passed a "decency clause" that gave the National Endowment for the Arts permission to deny grants to artists whose work was deemed "indecent." The NEA vetoed proposed grants for Finley and three other artists—Tim Miller, John Fleck, and Holly Hughes—known as the NEA Four. In response, Finley became the main plaintiff in a lawsuit the artists filed against the NEA for unfair denial of funding based on subject matter. The case made it to the U.S. Supreme Court before the artists lost.

"I was considered 'the devil, the witch, the evil one,'" Finley said of those years. "That was really, really a very difficult time for me to really find out, where am I if I don't have this support, and if I'm considered indecent? Where am I going to be bringing my ability, my talent, my creativity?" she said, her tone cold and sober, reimagining the sense of loss. After the legal defeat, she said she could not get her work produced due to a "chilling effect." "You cannot escape public funding," she said.

The artist refers to facing her share of hardship. When she was 21, her father committed suicide. She also said she has been the victim of sexual assault on several occasions.

At first Finley did not know what to do with the pain, until a teacher told her to transform the hurt into compassion. She said she tries to live by that today, and uses her trauma to enhance her art. "I have a deep capacity for life experience," she said.

Often involving nudity, profanity, and explicit themes of sexual abuse, her performances are not meant to be traditionally entertaining, and definitely not sexy. Instead, they are meant to appall. "I think that so many people feel that they can't do anything, that it's worthless, that it doesn't make a difference. I disagree with that, and I believe that art can make a difference," said Finley.

Born in Chicago and raised in Evanston, IL. with a politically active, progressive mother, a jazz musician-slash-salesman father and five younger siblings, the now 62-year-old artist has been making waves since her youth.

She recalls being part of a movement in seventh grade to change her school's dress code, when girls could only wear dresses and skirts, and succeeding. She also remembers being just 12 years old in 1968, a year notable for political action in the form of art, music and protests. She recalls attending events where the Chicago 8 were present, now the Chicago 7, a group of anti-Vietnam War protestors charged with conspiracy and inciting to riot.

"We have a history within our families, our country, about resistance, and we know what to do," she said. "Which is standing up, which is creating work, speaking out, marching and resisting, and not feeling that there's nothing that can be done."