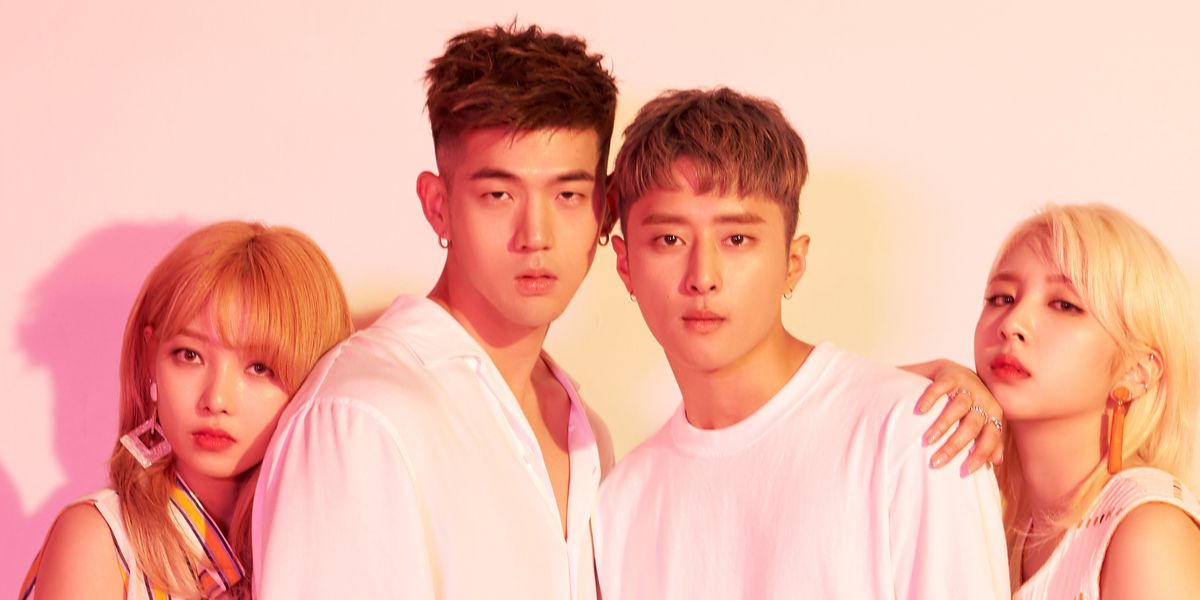 KARD: the Mixed Gender Group Paving Their Own Path in K-Pop

It's a tale as old as time — or, at least, the charts: boy bands and girl groups vying for the top spot. Less common, however, are the in-betweeners. Like ABBA, S Club 7 and Steps before them, KARD are paving a more unique path in the South Korean pop industry (and beyond) as a mixed gender pop group.

After officially debuting in 2017 with Hola Hola, Jeon Ji-woo, J.Seph, Jeon So-min and B.M have already managed to rack up an impressive three Top 10 EPs in South Korea together, in addition to touring all over the U.S., South America, Europe, Asia and Australia.

Their sound, a catchy fusion of dance floor-friendly EDM, dancehall and moombahton, fits in effortlessly with what's on-trend musically in the West, which is perhaps why they've managed to acquire a loyal global fanbase and consistently grace the Billboard World charts in just over a year.

With concerts lined up across Brazil in September and international crossover plans in the works, KARD are riding wherever the wind takes them — despite their very real fear of flying. PAPER caught up with B.M, below.

KARD is a mixed gender group. We know there are many boy bands and girl groups in K-Pop, and you're one of those rare exceptions. Do you still feel a sense of competition?

B.M: I can speak for all members when I say we respect all boy groups, all girl groups and all co-ed groups. I feel like more than it being a competition, we're just trying to pave our own path with KARD and be very unique. As far as competition, we don't try to come out with songs to be like, Oh, let's be better than that guy. Mostly, let's just be the best KARD we can be.

Your third mini-album, Ride on the Wind, came out fairly recently. How would you describe this comeback in comparison to the past two?

I think for this one, we tried to go with songs that everyone can just vibe to or relax to. In comparison, our last songs are very chic and powerful. This time, we took a little bit of a path where we just want people to relax a bit to our songs. It's a very chill vibe this time.

Do you feel like there's a distinct KARD sound?

I think more than anything, we just try to go with a very trendy sound with a little mix of everything. We don't want to stick to one genre, one sound — we're very open to genres these days. We want to try everything. Trap, R&B... jazz if ever given the chance. Right now, moombahton and dancehall is very in. So, we try to take what's trending and put a little bit of our own flavor on it.

You've previously said there were more than 20 songs considered for the comeback. How did you finally land on "Ride on the Wind," and the other songs that made the album?

Does it match your own taste? What are you listening to right now?

I listen to a lot of DJ Snake. A lot of Major Lazer. A lot of Diplo. LSD. A lot of artists that produce that EDM sound mixed with other genres.

You've got different members with, of course, different personalities. How does your creative process work with all the different producers and songwriters?

As far as songwriting, me and all the members always have input. And also in producing, and what sounds could be added or subtracted, and what kind of vibe. Some of us are very specific, some of us are more broad when it comes to producing and writing the lyrics. I think everyone always has a big input and plays a big part in making all the songs.

Is there something you disagree on the most?

What's crazy is, as far as music, we don't disagree too much. We add so much to the picture and it only makes the song better. Everyone's input always gives more strength to the song. It's funny, I think as far as the creative process, we agree about 98% of the time. Things we disagree on? Probably something like... food. [Laughs]

Oh, yeah? What do you fight about with food?

We kind of just have a different idea of what menu we want to eat at times, but we always end up eating really, really good. But that's probably the only thing we disagree on, mostly.

Speaking of food, I have to ask, because of your Instagram: what is your fitness routine?

I work out every day. Chest and shoulders, back and biceps, legs, abs... I hit abs every day. No matter how busy I am, at least five times a week. I can't miss out on the gym.

How long when you go?

Before, I used to only take an hour. But now I take like an hour and a half, two hours. I kind of changed my routine a bit. I used to lift very heavy, but nowadays I put down the weight a little and do a lot more repetitions because it helps the muscle stay when I have to go out of the country and be away from the gym.

I did not know that.

Cut the weight in half and do it like 20-30 times a set, and I promise you it doesn't go away as fast as if you lift heavy.

And do you do protein shakes and all that?

Yup, protein shakes every day. At least two or three slabs or chicken breast a day. Honestly, working out is fine for me now. It's just fun. It's just a daily thing. It's a big part of my life. Dieting is the hard part.

Are you restricting a lot?

Yeah, oily foods I have to stay away from. Or carbs. If I eat a lot of carbs, I blow up.

We watched you do a hysterical part-switch game for "Ride on the Wind." Is there a routine that usually trips you guys up on the road?

[Laughs] I want to say "Oh Na Na" was probably the most difficult one because dancehall is not only a musical genre, but it has its own dance as well. It was the first time learning that genre from a teacher that really studies and knows the genre from front to back. The moves itself are very, very hard. You need to use a lot of your thigh muscles, man. Since "Oh Na Na" was the first time we learned those moves and routines, I think that was pretty much the hardest one.

Good to know, we'll be watching more closely the next time you guys perform it. [Laughs] You've also done some appearances on variety shows. Are there acting aspirations in the group?

Definitely. Nowadays, J.Seph has gained a lot of interest in acting and I'm pretty sure the other members — they haven't said it yet — but if ever given the chance, I'm sure they'd work very hard. Acting is a big part of being an artist, as well. It's not scripted, but we do have to act when we do a music video, and we have a lot of fun doing so. If ever given the chance, I'm sure everyone would be happy to try.

You're about to hit South America is about a week, right?

Yes, we are! Having a tour in South America is very, very exciting. The energy out there is crazy.

Definitely, definitely. They're very thankful. I think they really appreciate having the artists there. The energy out there is insane. We take so much back from tours in South America — everywhere in general. Touring itself is so exciting and rewarding.

Are there any downsides to touring?

Honestly? I can speak for all members when I say this: riding the plane.

Five, six, 10 times in a month is probably the scariest thing ever. We're all very, very scared of flying. You can see it in our eyes every time the plane takes off and lands. We're all terrified of planes.

Oh no! That is part of the pop star job.

Yeah. But as far as traveling, it's a lot of fun. We love being able to meet our fans everywhere in the world. Besides the plane ride, everything is a blessing.

So then when is KARD coming to take over the United States?

Oh, man. We don't have any set dates yet. We get a lot of love from the U.S. We're definitely, definitely going to come hit the U.S. soon. I just don't wanna give out too much information yet, but we're definitely coming.

Do you look to any other past groups for inspiration?

I used to listen to a lot of A*Teens. I used to sing along. They came out on Radio Disney when I was young and living in California — like a lot. They say a lot of the things from your past when you were young have a huge influence on you in the future. I can't say they didn't influence me. A*Teens, I used to listen and dance to them every time they came on the radio.

A lot of times in K-Pop, members will do their own thing and then come back together to promote. Is there anything you'd like to accomplish individually beyond KARD?

I'm sure the girls would really love to put out a color they have their own confidence in. As far as KARD, we love our own music, and what we do, and the vibe we put out. I'm sure each member has their own aspirations as an artist. Me, personally, I just want to produce a lot of songs and make my name as a producer. As a rapper, as a producer, and maybe choreography as well. The whole creative process is such a big part of my life. I would love to make that a bigger part of my life and my name.

And together, what do you hope to accomplish with KARD?

Oh, I think that is definitely attainable considering the path you're going.

Wow, I appreciate that. Thank you!