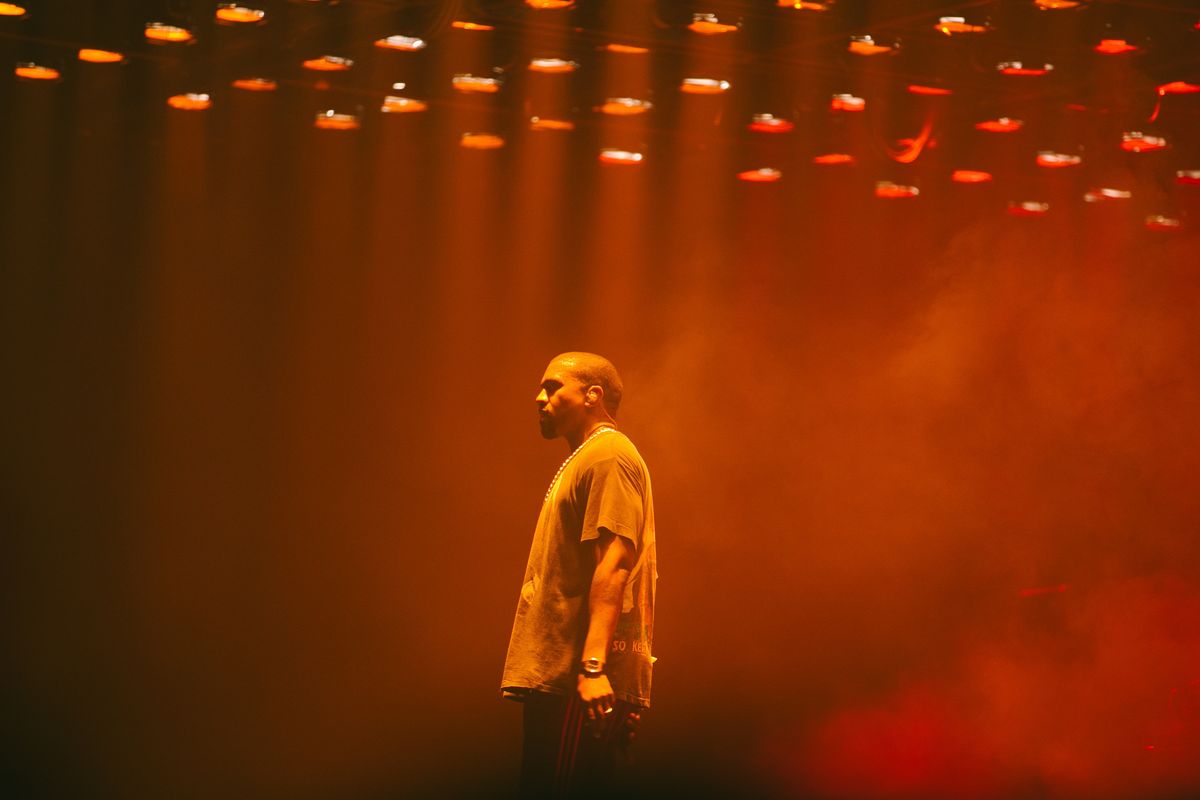 The PAPER staff convene to discuss only the most poignant of pop culture moments. Below are our musings on Kanye West's highly-anticipated new album, Ye.

Michael: First of all, did anyone stay up and watch the listening party on that shitty "WAV" app?

Vrinda: No, but I've read so many accounts of people who went.

Beatrice: I would have died to see a Jonah Hill mingle with Candace Owens.

Michael: There's a great picture of Kim awkwardly sitting with 2 Chainz at a picnic table with a dog who clearly doesn't want to be there. Who was your favorite celeb appearance?

Vrinda: I read about Chris Rock giving a toast. And about Jonah Hill saying he still sees Kanye as a celebrity despite being one himself.

Michael: Chris Rock said something kind of poignant — this is literally pulled from my frantic text thread with friends last night so excuse me if I'm paraphrasing roughly: "Hip hop is the first art form created by free Black men and no Black man has taken more advantage of his freedom more than Kanye West." That's a pretty powerful statement, but placed next to Kanye's insistence on his MAGA alliance as a form of free thought, it's rendered a bit more complicated. Also interesting to note how Chris Rock says Black men. I wonder if that was gendered or general.

Beatrice: A very loaded toast. Love that both Kim and Kanye were wearing Kanye-created merch for the event. Between that and the iPhone-shot album cover, it was all very DIY, in true Kanye fashion. Also Jonah Hill is one of those people who is everywhere and nowhere at once. Wya, Jonah? Come to Brazil.

Vrinda: Yeah. Wait, unrelated, but I messaged my friend about the album and she just asked if he addressed Taylor Swift. I just realized that he didn't, right? And I didn't even notice because there's so much else going on in the album/his life right now.

Beatrice: He definitely addressed Tristan, which was a surprise. I didn't think he was going to go there. Although it's not like Kanye to pull punches.

Michael: I don't think there's much more for him to say about Taylor at this point that hasn't already been said. If he did, that would've made this officially the longest running stage-to-wax-to-Internet celebrity beef since Paris and Nicole fake fell out on The Simple Life.

Michael: But I want to talk about that duo of songs that seems about Kanye and his relationship with women: "Wouldn't Leave," and "No Mistakes." In "Wouldn't Leave," there's this outro where he says: "for every down female [that] stuck with they dude, through the best times and through the worst times, this is for you." Kim is nothing if not loyal. And in "No Mistakes," it's almost like a 2-minute apology to the women he's mistreated. The chorus: "Make no mistake, girl, I still love you" kinda goes a way toward reminding us that despite all the antics, he's sensitive as a Cancer crab, though he's most def a Gemini. #notallgeminis

Vrinda: I've seen some online discourse about the line where he talks about seeing women as something to nurture after having daughters. What did you think about that line?

Beatrice: That's so interesting, honestly so much about Kanye feels like it can related back to his relationship with his mother, which sounded so special. She was everything to him. For that reason I don't think I've ever felt the full force of some of his more derogatory lyrics about women, there's always been an immense respect there.

Michael: I wonder if that was a leftover take from the booth from when she recorded her iconic "Monster" verse all those years ago. It sounds updated. Any thoughts on having Nicki end the album, and any potential significance there, you think?

Vrinda: Do you remember Kanye saying he almost didn't put that Nicki verse in "Monster" because it was the best verse on the whole album? What an iconic verse.

Beatrice: There's so much to unpack. What are your thoughts on "I Thought About Killing You"? Just straight off the bat.

Michael: I think we could parse apart every nuance, but I need a deeper listen first. Overall, my first impression is that it's a pretty open and honest discussion about what it may mean for him to live with mental illness. He just goes for it head on. In a weird way, too, it also adds to the myth of male genius he often raps and talks about: "Name one genius who ain't crazy."

Vrinda: It's interesting that Kim recently critiqued the media for speculating about his mental health, but then he addressed it very explicitly on the album. I guess it's very different for someone to speak about their own experiences than for people to armchair diagnose.

Beatrice: There was something truly genius about voicing all the inner thoughts we suppress too. Even people who aren't battling mentally illness think these things, feel these things. It's like the "pushing someone on the subway tracks" thing. Like I'm not going to ever do it but it's freaky how easy it would be. Do I sound like a serial killer? That's some Scorpio shit right there.

Michael: Yes, but it's kind of chic, I have to say.

Michael: Which is why him sort of laying it bare helps de-stigmatize having thoughts like those. It's one thing to think it, another to do it, of course.

Beatrice: And he says mental illness isn't a disability, "it's a superpower." Okay, "Yikes" is a full-blown bop.

Michael: That's one of my favorite lines on this record, for sure. And "Yikes" addresses #MeToo.

Beatrice: Just jumping to "All Mine," "If you don't ball like him [Tristan] or Kobe guarantee that bitch is gonna leave you." That is very pointed. The Christian Mingle reference too, where Blac Chyna met her current man. There's a lot of family laundry being hung out to dry. "All Mine" has all of the tea.

Michael: I just love how it seems like a sex anthem but then you stay for so much piping hot tea! Layers.

Beatrice: Sex anthems with subliminal social commentary and/or celebrity gossip are exactly what we need in this climate.

Vrinda: It reminds me of Kanye's Yeezy Season 6 campaign that circulated fake paparazzi photos of Kim and then made Paris Hilton dress up as Kim too.

Michael: That was so fucking major. Let's talk about the livestream event. Did anyone download that app it was on and attempt to watch it?

Michael: It was strangely Warholian, I must say. Which: duh, chic. There were long takes of campfires, rolling plains, and a misty sky backdrop that was very Man of the Woods, but like actually in the woods. One of my friends said it reminded her of Empire, that Warhol flick where the Empire State Building is filmed for eight hours. It has a 3.7 out of 10 on IMDB, for what it's worth. There were even horses running around. I was like, Omg, are they okay?

Beatrice: I'm not convinced that this whole album and its roll-out isn't just because Kanye is on the Wyoming tourist board's payroll. I mean, I've already booked flights.

Michael: Inviting myself. I'll bet Kanye's found lots of peace of mind out there, for what that's worth. Okay. We have other news to attend to today, so it might be time to wrap this up. But any favorite tracks? Final thoughts? Not like Jerry Springer-style, but you know, you know.

Beatrice: "Yikes." That "FML"-type flow has me shaking every time. But "I Thought About Killing You" is near-flawless. The perfect opener. Vrinda?

Vrinda: I've listened through twice and sonically I loved "Ghost Town" the most at first listen, but I think I really need to go through and read the lyrics fully to be an informed listener because there's so much here.

Beatrice: Seconded. Do you think this release has been enough to restore him in the eyes of fans who have found themselves on the fence?

Michael: I think time will truly be the test of that. It's always complicated with him and for him. I think that Kanye has always found ways, despite all the theater surrounding him (performance art???) to pivot the public discussion back to what made us love him in the first place. His music and talent are undeniable. I also think that for all the negativity surrounding this release with unforgivable MAGA endorsements et al, Ye proves to be quite a joyful affair. "Ghost Town" is a blast, I have to say. The line. "And nothing hurts anymore I feel kind of free" feels hard-earned, you know? It was also nice seeing him bop around on the livestream with all his homies while sporting the biggest cheese-eating grin on his face. Not all is forgiven, but knowing what we know about his struggles, a Kanye smile can warm even the coldest hearts.

Vrinda: I also wonder if he's going to roll out new songs or change the playlist the way he did with his last album.

Beatrice: There's no doubt in my mind. May Kanye find the freedom, and conversation, that he seeks.