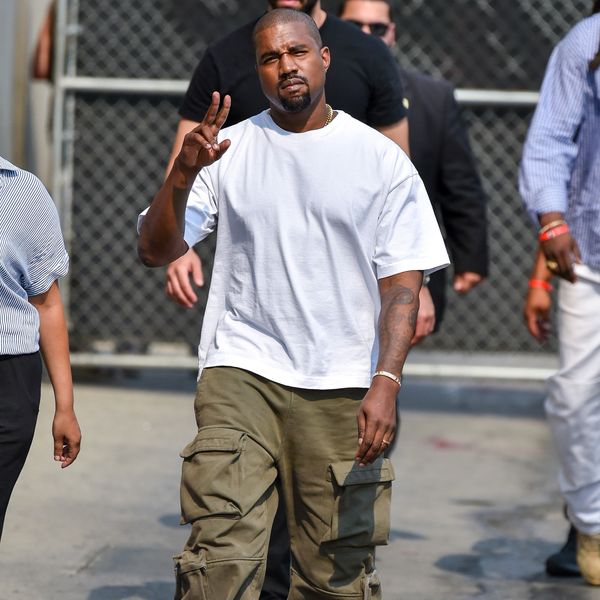 Everything We Know About Kanye's New Project, 'Yandhi'

Over the weekend, Kanye West tweeted about his new project, Yandhi, to be released on September 29th. West tweeted a series of images of billboards and ads that look like iMessages, reading "YANDHI 9 29 18." It's the rapper's sixth release of the year, after June's Ye and his joint album with Kid Cudi, Kids See Ghosts, as well as the records he produced for Teyana Taylor, Pusha-T, and Nas.

There isn't much widely available info about Yandhi, which has been publicly regarded as something like a sequel to Yeezus — West officially confirmed its existence on September 17th, and since then he's given more public statements regarding Twitter metrics than the album itself.

But Ye has given several hints about the record (it's unclear if it will be an EP or full album) via his highly active Instagram and Twitter accounts. So here's absolutely everything we know about Yandhi.

Yandhi, like Yeezus, is a portmanteau of Kanye and an internationally renowned leader — in this case, Ghandi.

Kanye will perform on the 44th season premiere of Saturday Night Live, hosted by Adam Driver. Yandhi is set to drop the same day (Donald Glover also recently used SNL to key promotional affect, releasing the video for "This Is America" right as he served as the musical guest on the show).

Possible collaborators for Yandhi include Chance the Rapper, with whom West is also working on an album called Good Ass Job. He has been photographed in the studio with Tekashi69 (who plead guilty to the use of a child in a sexual performance, and has also recently worked with Nicki Minaj) and producer Zaytoven, and has been spotted with Yeezus producer Rick Rubin. Chicago activist Aleta Clark recently shared photos with Kanye, Chance, Jeremih, Rhymefest, Shake, Mikkey Halsted, GLC, and other local musicians.

West has also shared several messages with conceptual artist Ryder Ripps, who works at his company, Donda. Could Ripps be involved in the record's holographic cover design?

Aleta on Instagram: “You’ll be surprised who sends for you when you stay low, stay solid, remain humble 🙏🏿.... Then @nolimitherbo Told me @breakfastclubam…”

And let's pray for Young Thug.

West's hometown of Chicago seems to be a huge factor in Yandhi's production. In a video posted by TMZ on September 18th, he announced a permanent move back to the Windy City, saying, "I gotta let y'all know that I'm moving back to Chicago and I'm never leaving again."And while West and wife Kim Kardashian did name their third child Chicago, at present Kim has no plans to move there full-time.

While Ye was famously made in Wyoming, West seems to be recording Yandhi in Chicago. There are bits of songs on clips of videos he took in the city, though it's unclear if those songs will be on Yandhi.